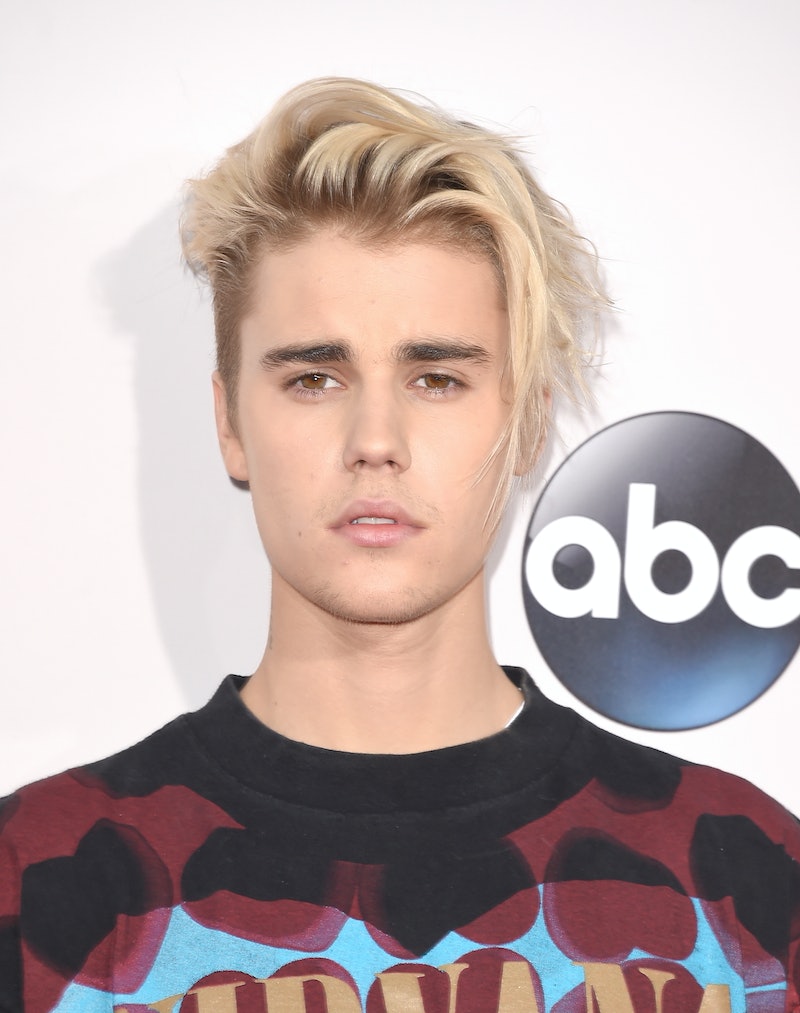 If you decided to skip the pre-Grammys coverage and get your snack plans in order (or whatever else it is people do) before the award show started, you missed the latest edition of James Corden's Carpool Karaoke. Justin Bieber did a Grammys version of Carpool Karaoke with the late night host and made the recurring Late Late Show skit fancier than ever. Both the singer and the host donned white tuxes and sung "Uptown Funk" as they drove around Los Angeles.

The clip started with Corden asking Bieber to apply moisturizer to his t-zone so that he could continue driving. The Biebs awkwardly obliged before they broke into Bruno Mars and Mark Ronson's "Uptown Funk," which is up for Grammys for Records of the Year, Best Pop Duo/Group Performance, and Best Remixed Recording, Non-Classical.

Bieber didn't seem totally into the song, but he did have a pretty high bar to reach, coming after to passionate Carpool Karaoke performances from One Direction and Adele. Hopefully, more of Corden and Bieber's Carpool session will be featured at some point — either later during the show or on a future episode of The Late Late Show — and Bieber will get to sing a song he's more into. One of his old hits like "Baby" might be a good idea. At least he'd definitely know the words!

More like this
Selena Gomez Reacts To TikTok Users Who Say She Shaded Hailey Bieber
By Grace Wehniainen
Twitter Is Upset About The 'American Idol' Top 3 Results: "Who TF Is Voting?"
By Jake Viswanath
Stormi Just Walked A Red Carpet With Mommy Kylie Jenner & Daddy Travis Scott
By Hugh McIntyre
How 2 'American Idol' Singers Performed With COVID-19 & Made It Into The Top 5
By Jake Viswanath
Get Even More From Bustle — Sign Up For The Newsletter