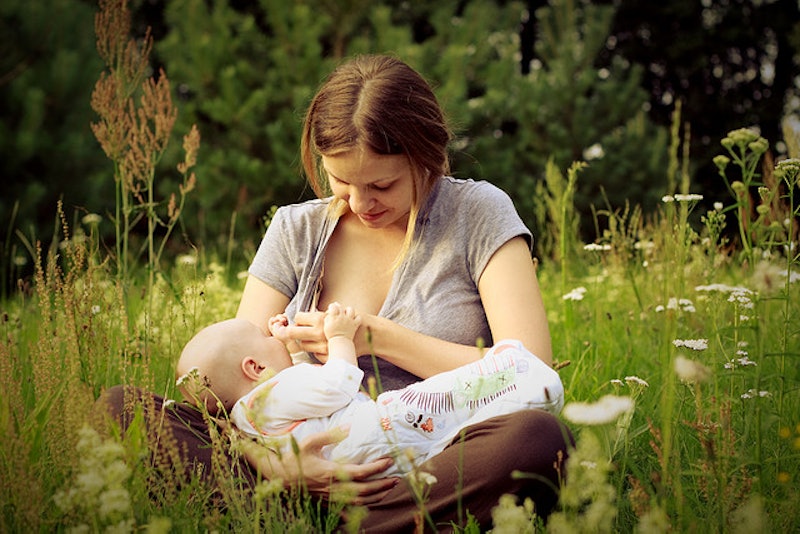 In this country of billboards covered in tits/ We should try to get used to this.

These are the last and perhaps most striking words of Hollie McNish's rant on the shame attached to public breastfeeding. A U.K. poet and spoken word artist, McNish posted this video to YouTube last week, and the number of views keeps going up.

"I wrote this poem in a public toilet," writs McNish in her description of the video. "I was embarrassed and for 6 months took her into toilets when I was alone without the support of boyfriend, friends, mum etc."

Women worry about offending onlookers in a public area, but shouldn't we consider a baby's wellbeing when it comes to where breastfeeding happens? McNish asks, "Trying not to bang her head on toilet roll dispensers/ I wonder whether these public loo feeds offend her?" Babies need to breastfeed every two or three hours, and it's unrealistic to expect women to do this at home all the time. And yet women are still asked to put away their breasts when they try and breastfeed in restaurants, stores — even at a pool for families.

McNish's most though-provoking argument has to be that "female breasts [are] banned/ Unless they're out just for show." Breasts are everywhere, nearly completely exposed (minus nipples). So is it the nipple that's particularly offensive? Or is it the fact that this public exposure has nothing sexual to it? Bottom line is, breastfeeding makes for healthier babies (and healthier moms), but many women are choosing to buy formula to avoid public nursing. If a little exposed skin is really all that's stopping us from choosing the cheaper, healthier, and more obvious method, it's time we readjust.