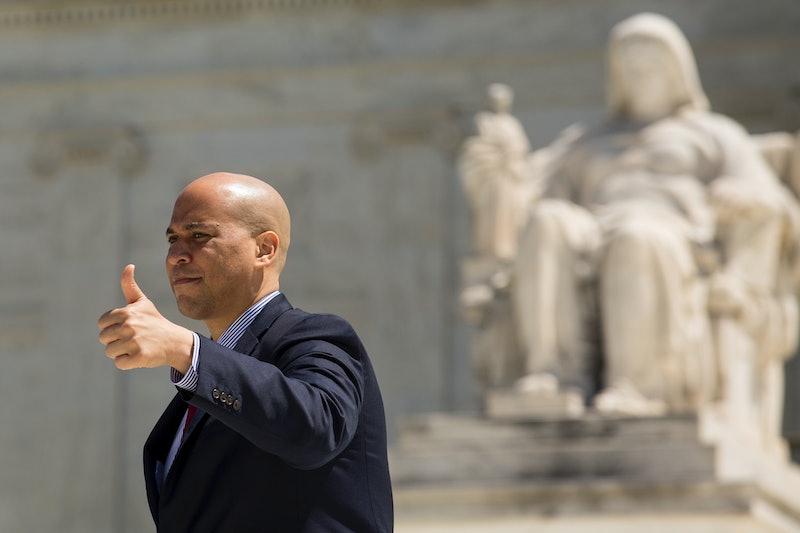 Following the death of Supreme Court Justice Antonin Scalia on Saturday, folks in Washington and the news media have circulated more than a few names as potential replacements for the man who served as an associate justice for three decades. including Sri Srinivasan, Patricia Millett, and Kamala Harris. Several prospective SCOTUS members have been quick to dismiss any suggestions that their names should be put in the nomination pool. Others, however, like Cory Booker, have refrained from giving a straight "no" when asked about his interest in being appointed to the country's highest court. So who is Cory Booker?

Booker currently sits as the junior state senator for the state of New Jersey. He took on the role in 2013 — the first African American to do so — when the state held a special election to find a replacement for the late senator Frank Lautenberg. Prior to joining the gang on Capitol Hill, Booker served as mayor of Newark for just over seven years, and the Booker campaign credits the now-senator's mayoral term with transforming New Jersey's largest city. Booker's site states that it was under the former mayor's leadership that Newark began its biggest period of economic growth since the 1960s.

Booker presents an interesting option in the context of Congress's loudly made promise to block any nominations put forth by President Obama before his second presidential term comes to an end, since Booker is, well, a member of Congress. Though Mitch McConnell and friends have claimed they will flatly reject any name to come out of the president's mouth, the president might do better to offer up one of the Senate's own than someone from the outside.

All of this isn't a serious concern just yet, though. Booker has not yet provided even the slightest hint that his non-answer actually signifies real interest in an appointment to SCOTUS, and his statements on the topic have focused entirely on his current role representing the Garden State.

It's humbling that anyone would mention me as a possible Supreme Court nominee, but I want to be very clear that my focus is 100 percent on doing the job I was elected to do — representing the people of New Jersey in the Senate.

Whether or not the Jersey boy is ready for SCOTUS could very well depend on his legal background. Booker did earn his J.D. in 1997 from Yale Law School, and ran free legal clinics for low-income Connecticut residents while completing his studies. Post-graduation, the New Jersey senator worked as a staff attorney for New York's Urban Justice Center, so the man has some chops in the legal realm. What remains to be seen is if this judicial background is nearly enough to handle working in the midst of the Notorious RBG.