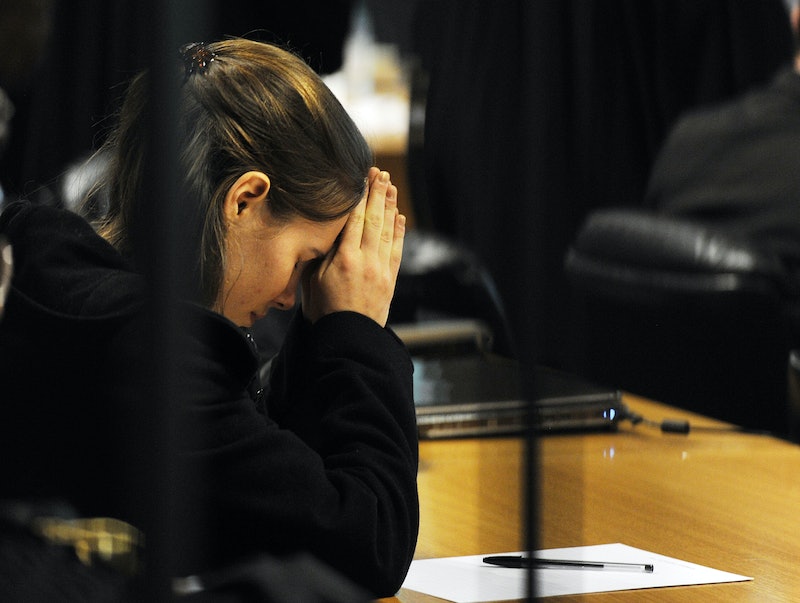 Amanda Knox, the 26-year-old American woman who has just been re-convicted for the murder of Meredith Kercher, has said that she will "never go willingly" back to Italy to serve her 28.5-year sentence. Knox made her pledge on ABC's Good Morning America, stating that she would "fight this to the very end." Knox was first convicted for the murder of British exchange student Kercher in a trial in Italy in 2009, but the charges were over-turned by appeal in 2011, and she was freed after serving four years in prison.

Meanwhile, her attorney Ted Simon insisted that his client was innocent, and told CNN's New Day that: "She [Knox] understands more than anyone that a wrongful conviction is unjust, not just for the accused but for the victim, their family, as well as society, and she feels this very personally."

During the course of the retrial, Knox has remained in the U.S., and it is unlikely that she would be extradited to Italy to serve the rest of her sentence. As Bustle reported:

The verdict today might not be the end of the drama that’s going on its seventh year. Under Italian law, either side can appeal the decision if they’re unhappy with it. However, Knox isn’t likely to be extradited to Italy to serve her time if found guilty: Although the U.S. has an extradition agreement with Italy, America has been known to simply not send over those found guilty in Italian courtrooms. Knox has said she’ll become a fugitive if found guilty, but the U.S.’s double-jeopardy law, which exists in American law but not Italian, also protects Knox, according to CNN.

However, Knox is insistent she will do everything she can to stay in her home country: "I will never go willingly back to the place where I—I'm gonna fight this until the very end," she reassured viewers.