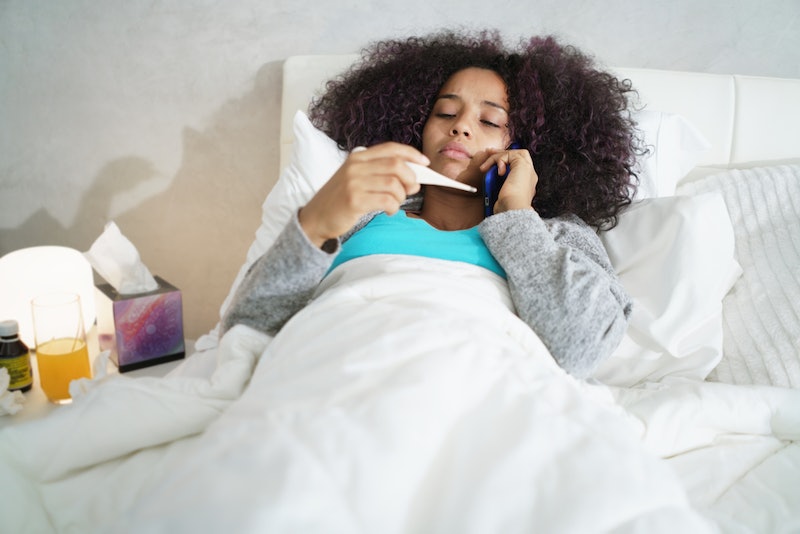 It's nearing the end of the cold season... which means that everybody will shortly be developing spring colds and will still be sneezing everywhere in your office. It's a joyous time of year. But if you have concerns and beliefs about having sex while you're sick with a virus or infection, you may want to check up on them. There's a lot of misinformation about the spread of non-STI illnesses during sex, from the belief that you might get a virus from a flu-haver's sperm to the idea that sweaty sex might break a fever. (Both untrue, alas.)

In general, the rule is: don't have sex while you're really sick. I know, it's sucky, but unless you're both down with the same thing at the same time, the only thing that'll happen is you'll get your partner sick. Sex will not cure your ills, and likely also won't endear you to your lover if it ends up making them miserable and sniffly too.

A cold isn't going to get in the way of your sexy times. "In general, we teach patients the above the neck rule," Dr. Jeffrey Walden, a family doctor in the Cone Health medical system, tells Bustle. "If they are only having head-cold or other above the neck type symptoms (runny nose, sore throat, etc), they should be okay for sexual activity. You might just want to reduce the 'vigorousness' of your sex, depending on how tired you are. And similar to a runner's high, the post-sex endorphins you feel might just make you overlook your stuffy nose for a while."

Here are five things you need to know about sex while you're sick. The next time a partner breaks out the "I'm sure it's safe, I just have a little bit of fever," make sure you know what's up.

The common cold or influenza can't be transmitted via semen or vaginal fluid. Unless you have a specifically sexually-transmitted infection, it's not likely to be spread by that means. But that doesn't mean that sex while you're ill with a virus is entirely risk-free, which brings us to...

2. ... But You Can Definitely Get Sick From Having Sex

After all, sex is a messy business involving many bodily fluids, including saliva and particles in the breath. If you're in a contagious phase, it's unwise to have sex, but not because your genitals are suddenly radioactive; it's because any interaction with somebody in an active viral phase risks contagion via other means, like coughing or sneezing.

"Symptoms like cough, muscle aches, and especially fever are riskier both for yourself and your partner," Dr. Walden tells Bustle. "It’s best to avoid sexual activity if you have a fever higher than 101 degrees Fahrenheit. You don't want to risk giving your partner something potentially dangerous like the flu."

Why anybody would want to have sex while they've got a stomach flu is beyond me, but there appears to be a conception in some circles that it's all good as long as you shower in between or try to keep yourselves hygienic. As people will discover to their cost, gastroenteritis germs are sneaky things that can live for up to 72 hours outside the body, and getting them into your mouth (which is the normal way to get the illness) is much easier than you might think, particularly during sex. Basically, everything that an infected person touches is a contagion risk, as is just being in their presence, so a condom provides no protection from spreading the virus.

3. Having Sex Will Not Reduce A Fever

This sounds like "real" science: the sweat produced by active sex is supposed to sweat out a fever, contributing to healthy recovery. The problem? It's an utter myth. The idea that you can sweat out a fever is a common misconception; aiming to induce sweat by excessive activity or warming the body with too many blankets isn't a way to break a fever's cycle. The raise in body temperature in a fever is your body's reaction to infection, as it attempts to fight off nasties through heightened immune system activity. Sweat for sweat's sake targets the wrong thing entirely.

You shouldn't "sweat out a fever" during sex any more than you should do heavy exercise with a fever: it may actually hinder you from getting better. The feverish body is already under a lot of stress, which it's doing its best to fight; further stressing it out is not going to help matters.

"By the time you have a fever, you’re already sick, and rest is the best thing to allow your immune system to recover," says Dr Walden. "Besides, most of the time when you’re running a fever, you feel too bad to move, much less roll around in the sheets."

5. Having Sex Will Not Boost Your Immunity After You're Already Sick

But it's too late to kick-start your immune system's effectiveness by having sex when you're already ill; that's like pouring oil frantically all over a faulty engine as opposed to doing regular maintenance. "By the time you're sick, rest and recovery is the most important thing. In this way, sex unfortunately seems to be more preventative than curative," Dr. Walden tells Bustle.

Two separate studies from 2015 confirmed that regular sex is good for immune function in women, likely because it's an evolutionary advantage for fertility. The immune system needs to be healthy to be able to conceive properly, or else it'll view sperm cells as invaders and do its utmost to prevent pregnancy. Plus, of course, better immune systems mean less risk of infections that may impede a successful pregnancy and birth.

If you only have a sniffle, it seems sex is OK — but anything more serious should stop bedtime adventures. "Rest is one of the most important considerations when you’re sick. Although sex shouldn’t make you feel worse (unless you have fever or flu), it might be best to just call it a night and make up for it once you’re feeling 100% again," Dr. Walden tells Bustle. Don't risk making it worse and potentially making your partner sick too; that's not sexy for anybody.