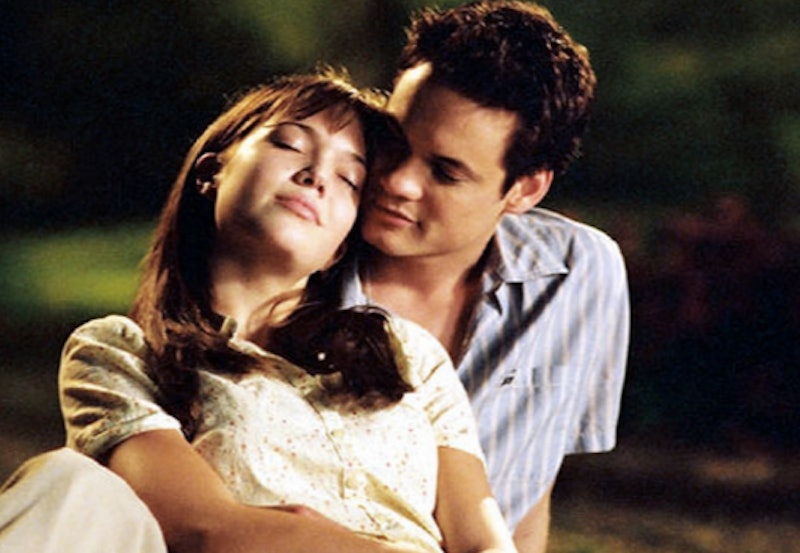 Before Nicholas Sparks movies were an annual occurrence, A Walk To Remember was the only solace most of us had from the dirge of superhero movies. Sure, a few misery-fests like Message In A Bottle had been made, but A Walk To Remember had it all — the always cute Shane West, Mandy Moore wearing an awful cardigan, and a super retro soundtrack (Jars of Clay! Switchfoot! Mandy Moore herself!). When it came out in 2002, none of us were quite prepared for the effect Nicholas Sparks would soon have on all of our lives, and hearts, and tear ducts. But A Walk To Remember has unrealistic moments that just can't be denied, no matter how much you loved the film.

Moore and West play Jamie and Landon, two very different teenagers on completely different paths — Landon is a wild child, always getting into trouble, while Jamie is smart, sweet, and a committed Christian. Their paths cross unexpectedly when Landon is made to do community service after a night of underage drinking goes wrong and one of his friends ends up seriously injured. As part of his punishment, Landon has to take part in the school play, which sees him spending more time with Jamie. Needless to say, sparks fly. While you don't need me to tell you that Nicholas Sparks movies can be a little far-fetched, here are all the times that A Walk To Remember is completely, insanely unrealistic.

1. When Jamie Tells Landon He Can't Fall In Love With Her

Probably the most famous line in the movie, as well as the most unrealistic. Jamie tells Landon that they can spend time together, but only if he promises not to fall in love with. First off, in what world does anybody make another person promise not to fall in love with them? While I love Mandy Moore's cocksure confidence in this scene, I have doubts that this would ever work in real life. For instance, if I'd told the hot popular guy in my school not to fall in love with me, he'd have laughed in my face, before dating my best friend. Just sayin'.

2. That Jamie Doesn't Care What People Say About Her

It's taken me decades of trying not to care about what other people think of me. Is there any teenager in the world that doesn't care, even a little bit, what others say about them? I don't think so.

3. The Stalker-Like Declarations Of Love

What works in a movie doesn't necessarily translate to real life. One such moment is when Landon tells Jamie that she wants to be with him. While this is something that happens in real life all the time, what's not realistic is the way in which Jamie finds the gesture so romantic. This is not romance, it's borderline stalking, and I'm not happy about it. The unrealistic notions of romance in this movie are problematic.

Jamie may hope to "witness a miracle," but would she say so in the yearbook? I mean, really?

5. That A First Kiss, On Stage In Front Of People, Would Be So Sexy

The glaring stage lights, the audience watching, the need to remember countless lines. There is no way a kiss would be sexy under these circumstances. I'm sorry.

6. The Greatest Response To "I Love You"

When someone tells you they love you for the first time, you probably shouldn't say "I told you not to fall in love with me." It's a bit rude. While I fully believe that hearing those three magic words can be completely shocking, I don't think anyone's first response would be "I told you not to", which is basically the equivalent of "f*ck off."

While some people do get engaged in high school, a popular movie and TV cliche all throughout the '00s was for teen sweethearts to propose. Nevertheless, I really don't think it happens often enough that it should be presented as something a teenage boy would totally think of doing — even in Landon and Jamie's unique circumstances.

It just seems way too prim and proper to ask a man if he's trying to seduce you. If I'd asked a hot single, or not so single, man if they were trying to seduce me, they'd most likely have said no. In fact, they did. Often. Sorry, Mandy Moore.

9. That Cliche About Finding The One Person Who Makes You Want To Be Better

While some people change us, support us, and help us to grow, it's a pretty tired cliche when a character announces that they're no longer a bad boy, and now they want to be a better person, all thanks to this one girl they met. Even though she wears terrible cardigans. Or because of that. Who even knows? It's unlikely, and unrealistic.

A Walk To Remember is still one of my favorite movies of all time, and The Choice can't come fast enough. Nicholas Sparks writes the most heart-wrenching stories ever, and knows exactly how to hook an audience. But realism is perhaps not his strong suit.

More like this
Harry Potter's Viktor Krum Has Undergone A Huge Transformation Since Hogwarts
By Sam Ramsden and Meguire Hennes
The First Look At Halle Bailey’s Ariel In ‘The Little Mermaid’ Has Twitter Hyped
By Brad Witter
Netflix Reveals First Look At Wednesday In The 'Addams Family' Spinoff Series
By Bustle Editors
She Founded American Girl To “Bring History Alive.” Then She Made Over A Town.
By Amanda FitzSimons
Get Even More From Bustle — Sign Up For The Newsletter