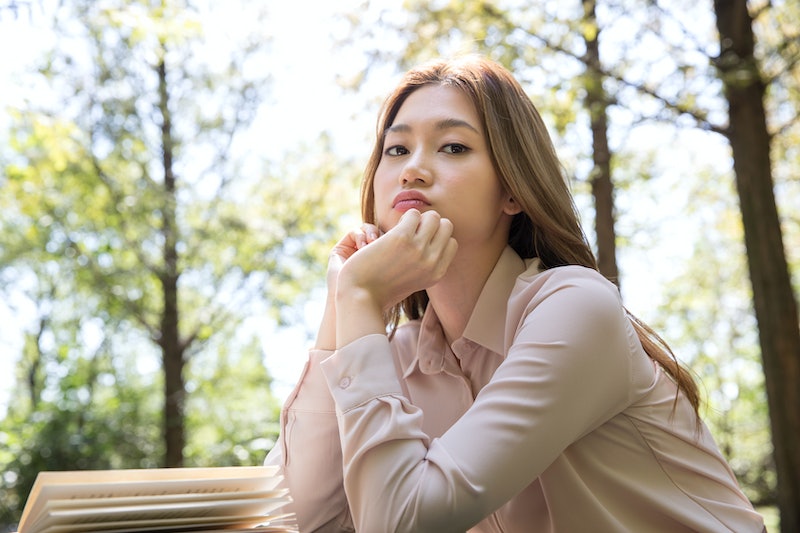 As a graduation present, I received a bracelet with the inscription, "Though she be but little, she is fierce." I wear it almost every day; it's part of my armor. I strive for, and take pride in, being a strong woman — but that goal has not always been met with positive reactions. There are plenty of backhanded compliments strong women are tired of hearing, but to be honest, there are a lot more straight-up insults we're sick of, too.

I hear a lot that strong women "scare men," "threaten them," "intimidate them." That "men don't like strong women." Not only that, but these statements are always presented as biological facts — like, it's super great that you're so tough or whatever, but maybe tone it down if you're looking to snag a boyfriend. Men want to feel like they're the protectors, like they're the breadwinners, and you just should let them.

Here's the thing: That line of thinking is insulting to, um, everyone. Do we have to baby every single man? Are all women destined for loneliness if they can't convincingly hide their strength (which, in addition to being sexist, is super heteronormative, by the way)?

I've moved to three different cities and built a life for myself, on my own, in each one. I've survived terrible boyfriends, terrible jobs, terrible housing, and terrible health problems — but I still see each day as an adventure, and a happy one at that. I do what I want and IDGAF about other peoples' opinions about me. That, to me, is unapologetic strength.

These things? I am tired of hearing them. And I'm sure I'm not the only one out there who feels that way, either.

1. "You must really intimidate men."

Why is my strength seen as an attack on masculinity? Why does there have to be a negative cause-and-effect in play? Me being strong and confident and resilient doesn't zap the strength from surrounding men. Sometimes I wish it did, because that would be an awesome super power, but alas.

Uh... OK? I know plenty of weak, whiny men, and plenty of strong women. Men, collectively, are not inherently tougher than women. When you say something like, "You're tougher than most guys," you're not only insulting an entire gender, but you're also just not saying a compliment. Like, you saying that means absolutely nothing to me.

Shut up. Shut your mouth up. As Zooey Deschanel so aptly put on her show New Girl, "I brake for birds. I rock a lot of polka dots. I have touched glitter in the last 24 hours... but that doesn't mean I'm not smart and tough and strong." For real. I own like, one pair of pants and I kind of look like Merida from Brave most of the time, but the way I choose to present myself physically has nothing to do with my resilience or my internal drive or my habit of arguing with people two to three times my size.

4. "When I first met you I was kind of scared, but you're actually really nice!"

I would be curious to hear how many times a man has heard this in his lifetime. Seriously, though.

5. "It's so great how you don't care what other people think."

Because what people are saying about me is bad, right? Like, whatever, dude. Bye.