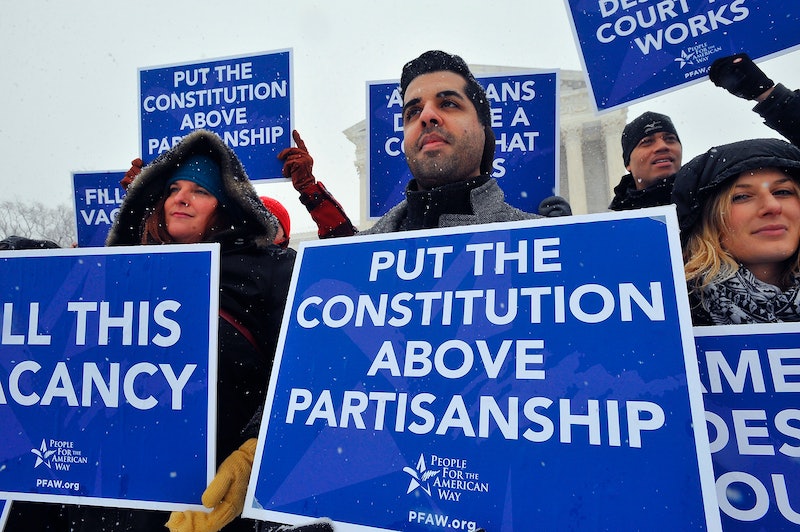 In the aftermath of Supreme Court Justice Antonin Scalia's death on Saturday, Republicans and Democrats in Congress have been coming to blows over whether President Barack Obama should nominate a replacement judge to the nation's highest court. According to Article II, Section 2 of the U.S. Constitution, it is fully within the scope of the president's duties to nominate a new justice to fill an empty ninth spot on the Court. But many Republicans, including Senate Majority Leader Mitch McConnell, are arguing that the president should not; in fact, McConnell has already promised to block any of the president's nominations. Why? Because of a "rule" (which is not actually a rule at all) attributed to Sen. Strom Thurmond in 1968. In the wake of Scalia's death, the GOP is invoking "Thurmond rule" — but both Republicans and Democrats have used it to their advantage in the past.

The Thurmond rule represents the idea that when an election is only a few months away, no judicial nominees should be confirmed. It originated in the summer of 1968, when Thurmond blocked Justice Abe Fortas, Lyndon B. Johnson's nominee, from being appointed chief justice of the Supreme Court.

Republicans are now playing fast and loose with the timeline of this not-rule, which was usually invoked the summer before an election year. Now, with Scalia's death, some Republicans are claiming that as early as February of the president's final year in office, he should not take it upon himself to choose the next Supreme Court justice. McConnell said in a statement: "The American people should have a voice in the selection of their next Supreme Court Justice. Therefore, this vacancy should not be filled until we have a new president."

Republicans have caught a decent share of backlash from Democrats on the issue, perhaps most notably from Sen. Elizabeth Warren. Warren denounced McConnell's actions, saying in a statement: "Senator McConnell is right that the American people should have a voice in the selection of the next Supreme Court justice. In fact, they did — when President Obama won the 2012 election by five million votes."

It's pretty easy to understand why the invocation of a non-legally-binding opinion as a rule to stymie the filling of a vacant Supreme Court seat would upset some folks. But it's worth noting that the Thurmond rule hasn't only been invoked by Republicans. Democrats have also turned to it when it stood to help them, and as recently as 2008.

During George W. Bush's final year as president, Democrats invoked the Thurmond rule to try to slow or block his nomination of lower-court judges. In 2008, then-Chair of the Judiciary Committee Sen. Patrick Leahy warned Bush of the "cutoff" supposedly outlined by the Thurmond rule. In response to this, several Republicans, including McConnell himself, spoke out against the "rule." McConnell said, "I think it’s clear that there is no Thurmond Rule. And I think the facts demonstrate that." Republican Senators Lamar Alexander and Chuck Grassley, who now support following the Thurmond rule, also spoke out against it in 2008.

While it's in no way a real standard, the sentiment behind the Thurmond rule could pose a big obstacle for President Obama during his final term. Those who rail against Republican obstructionism may want to keep in mind that it has been used by both parties, depending on when it has stood to benefit their respective interests.