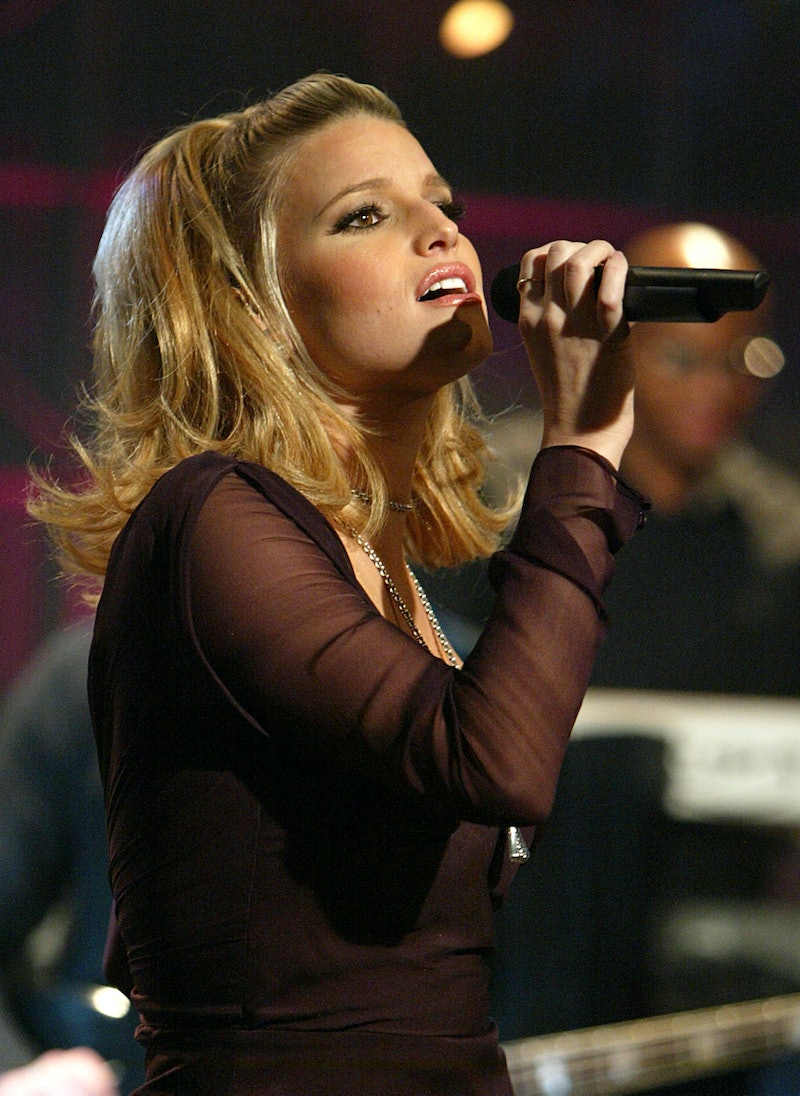 Listen, I hate picking favorites. I look at the '90s and early 2000s pop princesses like I would my hypothetical children: I love them all equally. But, unlike my hypothetical children, I am forcing myself to choose which one reigned supreme. It's not going to be easy, it's going to be really hard... Wait, isn't that a Nicholas Sparks quote? Anyway, you get my point. I hate doing this but it has to be done in honor of nostalgia: Who was really the best pop princess: Britney Spears, Christina Aguilera, Jessica Simpson, or Mandy Moore?

Before I go any further, I want to make it clear in the most diplomatic way that I can, that I think they're all the best in their own way. Truly, I do. I owned all of their CDs (and possibly cassette tapes), and made up some terrible dances with my friends to their various songs in my basement as a kid. It's just that... they can't all be number one. Someone's gotta take the responsibility for being the best, and I guess I am going to have to be the one to get them to clinch their title. *Wipes sweat* *Cracks knuckles* Let's do this.

So, who is actually "the best" between Spears, Aguilera, Simpson, and Moore? Let's hash it out.

Moore's initial foray into music was the epitome of bubble gum pop and I loved every single second of it. "Candy" was my freakin' jam, as was "I Wanna Be With You."

Like, Try To Listen To This And Not Sing Along

Don't Even Get Me Started On This One

Also, Consider Her OSCAR WORTHY (In My Humble Opinion) Performance In A Walk To Remember

But while all of these things had her firmly in place as a potential pop princess, she sort of took herself out of the running. She said of her albums, So Real and I Wanna Be With You to the Houston Chronicle in 2004, "I apologize to anybody who bought them and wasted their money." That said, I'm going to respect her very humble and self-aware opinion on this one and I'm going to take her out of the running for top pop princess.

There was no bigger fan of Simpson during the Newlyweds craze than yours truly. For real, I went to various concerts and early morning talk shows to see her. But despite her rise to even greater fame because of that show in addition to the songs and films she did and her incredibly successful business (per Forbes in 2014, it's worth $1 billion), Simpson's pop star essence didn't shine quite as brightly as Aguilera or Spears' did, for whatever reason, despite having a killer voice and great style.

For Instance, "Irresistible" Was The Best

And I know I'm not the only one who felt that way.

As Was "I Think I'm In Love With You"

Also, She Was A Fashion Icon From The Start

Despite being underrated then, alls well that ends well. Because maybe she wasn't considered "the best" back in the day, but she sure isn't having any problems in any facet of her career currently.

While I'm inclined to give her this title because, hello, she's Brit Brit, I can't undermine the other ladies' success just because B. Spears' name has staying power. Sure, she brought us timeless pop anthems, to name a very select few, "Hit Me Baby One More Time," "Oops I Did It Again," "Toxic." And, yes, I am aware that she has her very own Vegas show. I think she's a phenomenal dancer, an even better entertainer, and she without a doubt did take the crown for Miss Popularity back in the day.

This Song Was The First Cassette Tape I Ever Owned

This Song Solidified Her Dancing Cred

And I Mean, Come On, This Doesn't Even Need An Introduction

On The Popularity Front, There Was This

Anything she did made waves. Anything.

Being one half of a pop power couple helped her case, too.

But, that said, if we're considering everything, if we're covering all the bases, I have to put her in second place. *hides face*

Alright, let's call a thing, a thing. While I think all of these ladies are riddled with talent, the title for strongest vocalist has to go to Aguilera. And that's in both power and emotion. The girl brings me to my knees anytime I catch "Beautiful" or "Hurt" on the radio.

Lest we forget that this song was also a part of what made Mean Girls iconic.

Like "Dirrty," Which Always Has Me Up Out Of My Seat

Or "Genie In A Bottle," Which I Did A Terrible Dance To At My Fifth Grade Talent Show

I'd be here all day if I listed the rest of my faves.

When you get down to it, the real contest has always been between Aguilera and Spears. And though Spears may have held the unofficial "Pop Princess" title, Aguilera has also won four more Grammys than she has, which one I would argue count technically negate that status. When it comes down to it, sales aside, awards aside, media-dubbed titles aside, I think Aguilera was truly the best for this reason: She was the full package.

The Major Following And The Stage Presence

But She Also Had The Longevity And THE VOICE

Which edges her past Spears just slightly.

Let's just consider Aguilera as the valedictorian whereas Spears was the salutatorian and both Simpson and Moore were on the honor roll. That way, everyone wins... sorta.

More like this
Britney Spears Shares & Deletes Photos Of Justin Timberlake From 22 Years Ago
By Jake Viswanath
20 Years Ago, J.Lo Was Supposed To Kiss Madonna With Britney At The VMAs
By Jake Viswanath
Lewis Capaldi Is “Really Sorry” After Pre-Sale Ticket Fiasco Guts Fans
By El Hunt
Prince Harry Incorrectly Recites Christina Aguilera’s “Genie In A Bottle” Lyrics
By Jake Viswanath
Get Even More From Bustle — Sign Up For The Newsletter