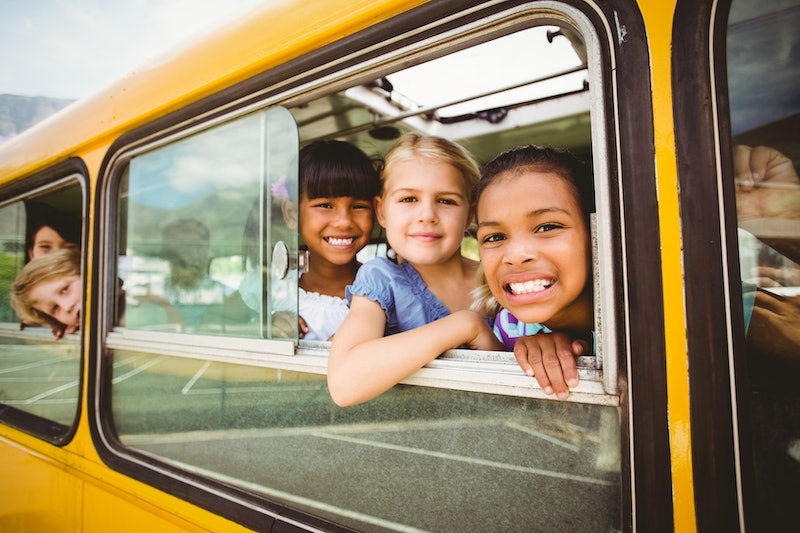 Before SmartBoards and tablets and virtual reality, there were field trips. Remember those? You'd get to leave school, and ride on a bus with your whole class, and sometimes the teachers wouldn't enforce the dress code so you could wear jeans. I realize that last one is a selective experience — but, like, you guys all get the general vibe, right? Like, there were classic field trips every '90s kid went on. We all know them. Let's remember them. They were weird and fun.

It wasn't just that you got a reprieve from Algebra class that made field trips so exciting. It was figuring out who you were going to sit next to on the school bus, and all the weird stuff that went on once you were actually on the school bus (I had my first kiss on the back of the bus on the way back from seeing The Fall of the House of Usher). Occasionally, the trips themselves were pretty freaking cool, too. There's a reason why field trips were a thing for so long, you know?

And even though we didn't go into the outer space or literally becomes bees a la The Magic School Bus, we still learned things. Important things. Like how to pronounce "oregano." It's not "or-uh-GONE-oh," a lesson I learned after confidently pronouncing it that way and then being laughed at by the woman at the farm.

As a treat, each student was given their own disposable camera. You used up most of the roll hitting it against your hand so it would make a giant flash and scare somebody. Every printed-out, disposable camera photo of me in Colonial Williamsburg features plaid capris and a visor. With rhinestones on it. I bought my parents Colonial Williamsburg shot glasses and a handmade beeswax candle that broke in my duffle bag on the way home.

You had to dress up, and there was always one boy who forgot to dress up, and the teachers made him wear a blazer and/or a tie out of the Lost & Found bin. The orchestra, without fail, would play "Peter and the Wolf" and describe each of the instruments like they were people. You probably fell asleep.

Getting there was honestly the most exciting part of the whole trip. There was a giant bus, and we watched VHS tapes on it on those little fold-down screens while the cool kids played truth or dare in the back. All the kids whose parents wouldn't let them eat sugar would eat candy the entire trip; they also all vomitted in a public place at least once.

My first field trip to the planetarium was a big sartorial moment for me. I wore a a glow-in-the-dark, planet covered T-shirt and a black velvet button-up. Also, a field trip that involves extended periods of time in a very room in very close proximity means prime first kiss territory. I mean, not for me, because I was literally wearing a black velvet button-up, but... you know...

I remember the mummies, the knight armor, and... uh... that's it. There was a lot of walking down really echo-y, marble halls. Sometimes they let you sit on those benches and "journal"; mostly, though, you just spent that time trying to look cool and so very uninterested in your crush who was sitting on the other end of the bench.

Just kidding — this is just the most classic Magic School Bus episode ever and I felt I had to mention it. Man, Miss Frizzle always planned the best field trips.