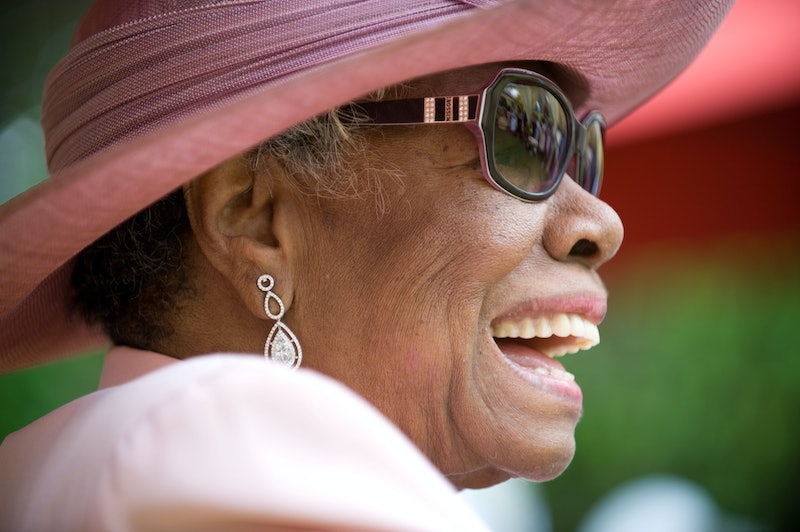 My niece is in kindergarten, and when I asked her if she was learning about Black History Month in school, she told me that her class was doing a project on Dr. Martin Luther King, Jr. She listed the books they were reading and the speech they had listened too, but when I asked her what other people she had learned about in school, she gave me a classic six-year-old stare, and I realized she didn't know about all of the amazing women to be celebrated during Black History Month.

From activists to authors to politicians, there are so many women whose lives and contributions should be included in the celebration of Black History Month, but for kindergartners and adults alike, those women are usually overlooked. Not to underplay his contribution to history, but there is so much more to learn about and celebrate in addition to Martin Luther King, Jr. He may be the most common part of the lesson plan in classrooms across the country, but the truth is the seeds of Black History Month were planted in 1926, when Carter G. Woodson and the Association for the Study of African American Life and History founded Negro History Week, before Dr. King was even born. When it transformed into Black History Month in 1976, it became an entire month dedicated to the celebration of the achievements and contributions of African Americans — including women.

From fearless political activists to groundbreaking feminists, here are 13 women you should be celebrating for Black History Month, in case you need more reasons to appreciate this February.

Despite her disabilities and paralysis, Maggie Lena Walker (1864-1934) didn't let anything stop her from becoming a true leader. The daughter of a former slave, she was not only a teacher and a business woman, but she was also the editor of the St. Luke Herald, the first black woman to form a bank, and the first woman of any race to be a bank president in the U.S. She was also an active community member, and once, she even ran for governor of Virginia. A true inspiration for black Americans and women everywhere, Walker's accomplishments are astounding, especially considering she did it all decades before women's suffrage and the Civil Rights movement.

You probably know her as Mammy in Gone with the Wind, but Hattie McDaniel is more than her highly criticized role in the 1939 film. The first black woman to win an Academy Award, for Best Supporting Actress, she was also the first African American woman on the radio. Though never wholly accepted or appreciated by the industry while she was alive, McDaniel was a pioneer for black women in entertainment who helped paved the way for all those who followed.

Famously quoted as saying "My theory is, strong people don't need strong leaders," Ella Baker (1903-1986) was a prominent civil rights leader in the 1930s whose role was mostly behind the scenes. She was involved in the groundbreaking organizations of the NAACP, the Southern Christian Leadership Conference, and the Student Nonviolent Coordinating Committee alongside other influential leaders like W. E. B. Du Bois, Thurgood Marshall, and Martin Luther King, Jr. She helped shape the Civil Rights movement and molded the minds of future activists, including Diane Nash and Rosa Parks, while she worked tirelessly for over 50 years fighting for equality. A true inspiration, Baker proved you don't need to be famous to make a difference.

An educator and an activist who laid important groundwork for voting rights among black citizens, Septima Poinsette Clark (1898-1987) used literacy as her chosen weapon in the fight for civil rights. Alongside the NAACP, Clark created a successful petition that resulted in the first black principal in Charleston, and in 1979, President Jimmy Carter named her the recipient of the Living Legacy Award for her work with African Americans and literacy. If you want to know more about her, you should read her American Book Award-winning autobiography, Ready from Within: S eptima Clark and the Civil Rights Movement .

In the face of poverty and discrimination, Bessie Coleman (1892-1926) beat all odds and became the first African American female pilot in the United States. After being refused admission to every flying school she approached in the U.S., Coleman traveled to Paris to train, where she was the only non-white student in her aviation class. Despite issues of racism and sexism, Coleman graduated with an international pilot's license and went on to become a wildly popular aviatrix drawing thousands of people to her air shows. After her tragic death in a plane-related accident in 1926, black and female pilots nationwide began honoring Coleman with an annual fly-over tribute above her grave site.

Considered one of the first black female stars of the entertainment business, Josephine Baker (1906-1975) was an actress, singer, dancer, and humanitarian whose kind heart guided everything she did. Born from humble beginnings in St. Louis, Baker started out as a member of the Jones Family Band and the Dixie Steppers, and eventually made her way to the stage as a chorus girl in Shuffle Along. Baker famously left the United States for Paris, where she found fame and fortune on the stage, and became a French citizen after claiming she couldn't live in a country where she was "afraid to be black." While in France, she helped with the war efforts during WWII, performing for troops, acting as a correspondent for the French Resistance, and serving as a sub-lieutenant in the Women's Auxiliary Air Force. During this period, Baker started adopting what would eventually be 12 children, whom she referred to as her "Rainbow Tribe," proving people of all different races, religions, and backgrounds could live together in harmony. Though hesitant, Baker did eventually perform in the U.S. again and found the racial climate so different and so much more inviting, it made her weep on stage.

In her home state of Arkansas, Daisy Bates (1914-1999) made such an impact that there's even an official state holiday in her honor, Daisy Gatson Bates Day, and once you know more about her, you'll understand why. An activist, journalist, publisher of the Arkansas State Press, and lecturer, Bates played a key part in the Little Rock Integration Crisis in 1957 as an outspoken supporter and guide for the black students who were trying to enroll in the Arkansas public schools with white students. She mentored the children who became known as the Little Rock Nine and refused to give up on the idea of desegregation and education for all, despite the many threats made against her. Bates later went on to serve on the Democratic National Committee and was even a member of President Lyndon B. Johnson administration, and the legendary woman continued her work on behalf of African Americans and poor Americans until her death.

You can thank Fannie Lou Hamer (1917-1977) for the phrase “I’m sick and tired of being sick and tired,” among many other things. A tireless voting rights activist and civil rights leader, Hamer was an integral part of the Mississippi Freedom Summer for the Student Nonviolent Coordinating Committee, a campaign in 1964 whose aim it was to register as many African American voters as possible in the state, as well as a key member of the Mississippi Freedom Democratic Party, which she eventually became the Vice-Chair of and even represented at the National Democratic Convention in 1964. A dedicated civil servant committed to improving the lives of the poor minorities in her state, Hamer has rightfully earned her spot in the National Women's Hall of Fame.

You can't mention notable African American women without mentioning Rosa Parks (1913-2005), the "first lady of civil rights" and "the mother of the freedom movement." When Parks refused to give up her seat to a white passenger in Montgomery, Alabama in 1955, her act of defiance became a bright torch in the growing civil rights movement, and she became a true icon. In addition to her most notorious action, Parks was also an active member of the NAACP and the Black Power Movement. When she died, her body was carried to Washington, D.C., on a bus like the one she protested on, and was laid to rest in the rotunda of the Capitol, where she was the first woman and second black person to be given the honor.

President of the National Council of Negro Women for four decades, Dorothy Height (1912-2010) dedicated her life to helping African American women in every way she could. An outspoken women's activist and the "godmother of Civil Rights," Height made it her life's work to gain equality for black women after she was denied entrance to college because of her race and gender. A dedicated and hard working woman, Height initiated programs to ensure voting rights, facilitate integration of public institutions, and combat poverty and AIDS. From her earliest days at anti-lynching protests in the 1930s to President Obama's inauguration, there are few women who have not only seen but been such an important part of African American history the way Height was.

Author, poet, feminist, and civil rights activist, Maya Angelou (1928-2014) is a personal hero of mine and likely many others. A powerful and moving writer, Angelou's work changed the landscape for both female authors and authors of color, and has even influenced modern hip-hop. In addition to her writing career, Angelou worked alongside prominent leaders such as Martin Luther King, Jr., and Malcolm X in their fight for black equality and civil rights. A globally celebrated literary and activist figure, Angelou's legacy and writing will live on to inspire authors for generations to come.

Angela Davis (1944) may be in her 70s, but her work as a political activist, scholar, educator, and author is far from over. An influential member of the radical counterculture movement of the 1960s and former member of the Black Panther Party and the Communist Party, Davis has never been afraid to speak her mind and stand up for what she believes in, no matter how controversial, which has gotten her in trouble more than once. More than just a civil rights activist, Davis has been involved in the feminist movement, prisoner rights, and social justice. A lifelong activist, Davis is currently a Distinguished Professor Emerita at the University of California, Santa Cruz, where she continues to shape the future for feminists and African Americans across the country.

A groundbreaking feminist, Kimberlé Williams Crenshaw was a key figure in the development of intersectionality to feminism in the 1980s and 1990s. As a scholar of critical race theory, executive director of the African American Policy Forum, and professor of law at Columbia University and UCLA, Crenshaw's work is focused on the intersection of law and gender and racial discrimination, but she frequently writes about the immediate need for intersectionality to be a focus of modern feminism. A brilliant woman and inspiring feminist, Crenshaw is a woman to watch.

Though this list barely begins to scratch the surface of the countless black women in America worth celebrating, these 13 remarkable women are a great place to start. Who will you be celebrating this month?

Want more discussions about race and gender? Check out Bustle on YouTube.