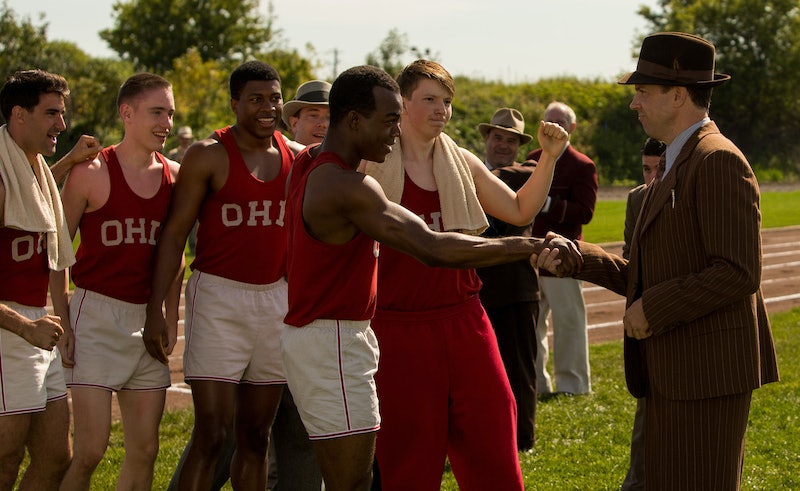 If they're done right, all sports biopics should have at least one "stand up and cheer" moment. In the case of the Jesse Owens biopic Race, I expect there will be too many of those to count. In 1936, Owens won four gold Track & Field medals at the 1936 Olympic Games in Berlin. What would have been incredible feat of athleticism, skill, and determination at any time, the African-American athlete's victory was especially significant as it occurred during the rise of the Nazi party, who proclaimed that all other ethnicities were inferior to Aryans. Owens died in 1980 at the age of 66, long before this film began its development. But Race filmmakers engaged the family of Jesse Owens in the process, giving the movie a certain seal of approval.

Two of the athlete's three daughters, Beverly Owens and Marlene Owens Rankin, served as consultants on the film, and told Seattle's K5 NBC News channel that watching the finished product is an emotional experience. "It can be difficult, because it makes you realize and remember that life was not easy for him," Owens Rankin said. Selma actor Stephan James plays Owens in Race, and spoke to Cleveland's Fox 8 News about the effect his access to Owens' daughters had on his performance. James said:

We see so much online about Jesse Owens, the athlete, the super human, the fastest man on the planet, but very little about the man he was, the father he was, just the husband he was. So it was interesting to have them to sort of get a personal perspective on Jesse, which was sort of invaluable to me.

Embellishment is pretty standard when a story like Owens' makes its way to the screen in a major motion picture. But the involvement of not just the man's daughters but also the Jesse Owens Foundation and Jesse Owens Trust add credibility to Race that other biographical movies don't have. The Foundation and Trust have been supportive of the film since Deadline announced Focus Features' purchase of the distribution rights. Marlene Owens Rankin told TMZ that the family didn't hold back from exerting their influence, putting the kibbosh on scenes that weren't true to Owens' real-life experience as a black athlete rising above incredible adversity in a unimaginably turbulent time. "Our focus was to make sure history wasn’t rewritten and that they stuck to the facts," Owens Rankin said. "But they took those parts out and we love the product. We’ve been to several screenings."

One of those screenings was a red carpet premiere on Feb 15 held at Owens' alma mater, Ohio State University, where the athlete earned the nickname "Buckeye Bullet." Jason Sudekis co-stars in Race as the runner's college track coach, Larry Snyder, and both Owens and Snyder were remembered by the University at the event. Marlene Owens Rankin and Owens' third daughter Gloria — also Ohio State alums — were in attendance. Gloria told the Greater Columbus Sports Commission what she hopes audiences take from the film. She said:

What I want people to remember about my father is that he did not judge people by the color of their skin. He was not angry and resentful and he always felt he was a part of this country.

Race opens in theaters on Feb 19.