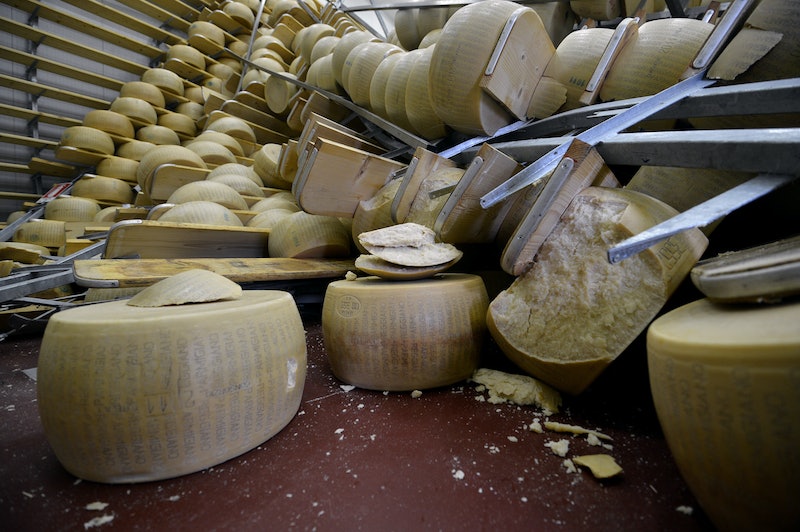 Now, the good news is that it's not like your grated parmesan is actually part wood shavings; furthermore, cellulose is perfectly safe to eat. It's listed by the FDA as a common fat replacer in foods ranging from dairy products to baked goods. But unfortunately it seems that a lot of Italian hard cheeses that are made in the United States contain a significant amount of cellulose — and plenty are also partly made up of other cheeses, too. And the problem is widespread enough that the FDA is cracking down, according to Bloomberg Business.

Well, when it comes to cellulose, the additive is an increasingly popular one in the United State; it's often used to give food a smooth consistency and to help a product retain moisture, preventing it from drying out. It's considered very safe — in fact, the Mayo Clinic suggests it might even be a good thing, since most American don't eat a lot of foods naturally high in fiber, while cellulose has it in spades — and it's used in everything from ice cream to salad dressing. So why is it such a problem with regards to the whole parmesan thing? Because many of the cheeses that scored highly on cellulose content are being advertised as "100 percent parmesan cheese." You can't advertise something as being 100 percent pure if it actually contains additives.

And it seems that doing so is a widespread problem. Bloomberg had several popular store brands of parmesan tested and got back a string of positive results for cellulose.

Bloomberg also found that companies may also add other types of cheese to their parmesan products. The thing about hard Italian cheeses is that, because they lose so much moisture during their production, it requires more milk in order to produce the same amount of hard cheese as it does softer cheeses like mozzarella or cheddar. As such, according to Bloomberg's report, it wasn't uncommon to find "100 percent parmesan" fortified with cheeses like mozzarella, white cheddar, and Swiss.

So how can you ensure that your cheesy goodness really is the type of cheesy goodness you're looking for? Well, it seems one way is to avoid pre-grated cheese. According to Arthur Schuman, a New Jersey-based cheese producer, grated cheese tends to be the worst offender. In fact, he told Bloomberg that when it comes to grated cheese, "Less than 40 percent of the product was actually a cheese product." So maybe buy your parmesan in a block and take the time to grate it yourself.

Hopefully, the FDA crackdown will ensure that manufacturers start shaping up quickly — after all, if there is one thing that ought to be sacred it's cheese — but in the meantime, make sure that stuff you're sprinkling on your pasta is what you intend to be sprinkling there.