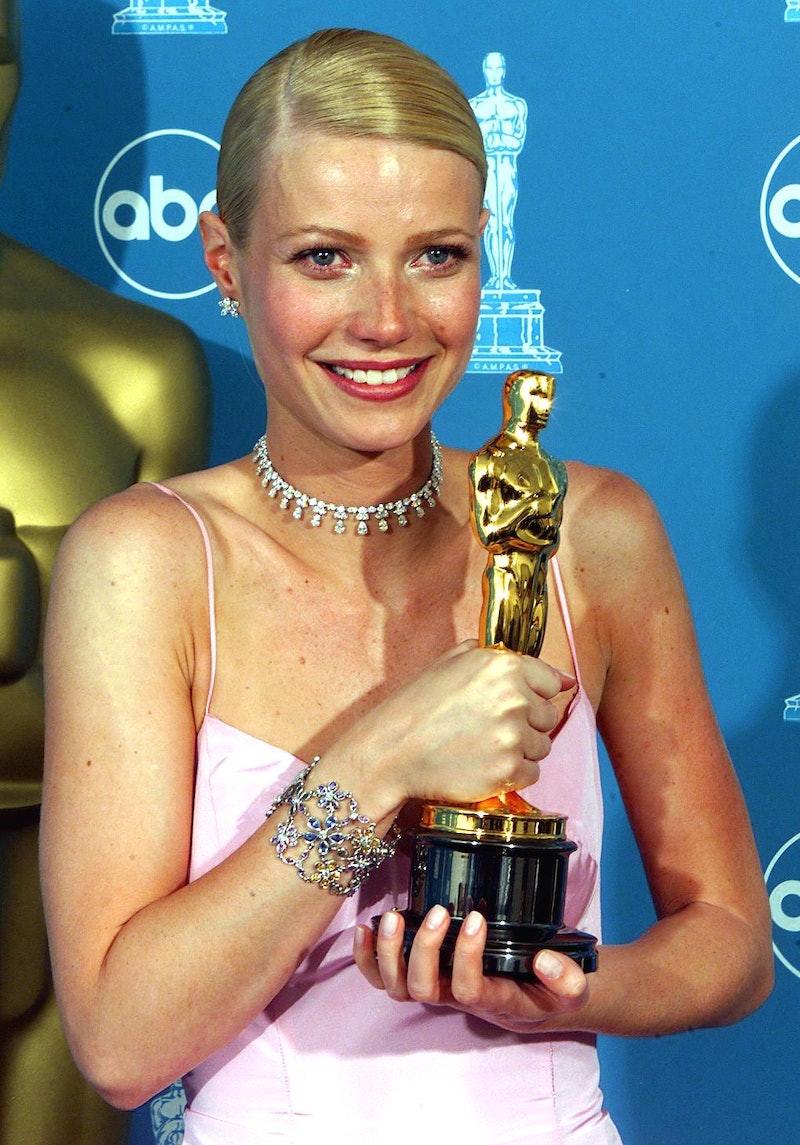 At the 1999 71st Academy Awards, Gwyneth "Goop" Paltrow wore a dress that would later come to define the fashion of the entire decade. With skinny spaghetti straps that cut into her shoulders, a classic low "v" neckline, and wide skirt that hit the floor, this soft pink taffeta Ralph Lauren number will probably not be seen on the 2016 Oscars red carpet, but boy was it memorable.

Paltrow paired the dress with Harry Winston diamonds on her ears, neck, and wrist valued at around $160,000 and given to her as a gift from her parents, according to CNN Money.

The only way to accurately describe the look that Paltrow emulated is to say she looked like a stereotypical princess. This was the dress that made fashion critiques take notice of Paltrow's style choices. The dress has been heralded as one of the best Oscar dresses of all time.

Before then, she had just been known as the daughter of Blythe Danner and Bruce Paltrow: a stereotypical Hollywood child who was following in the footsteps of her family. However, Shakespeare In Love was her breakout role and she received the award for Best Actress that year. She also won for the portrayal of Viola de Lesseps at both the Golden Globe and SAG Awards a few months prior. She was the sweetheart of 1999.

Over time, the world noticed that Paltrow had a certain affinity for pink, and six years later she wore a very similar Stella McCartney designed floor-length strapless mermaid dress to the same awards show. The dress once again received a positive reaction. Although, US Weekly later reported that her mother hated the Ralph Lauren dress that became so iconic. A classic case of, "I'll wear what I want to wear, Mom!"

Since then, Paltrow has become a true fashion icon. She has seemed almost ageless for the past few years, has created her own brand, and takes weekend vacations to cool ski chalets. It's hard not to be a bit jealous.

This is perhaps a part of the reasons why she has been named one of the most hated celebrities. It's not just because she once said she'd "rather die than let [her] kid eat Cup-A-Soup." She seems to be beautiful, rich, happy, successful, stylish, and very unapologetic about it. Much like Anne Hathaway and Kristen Stewart, Paltrow is thrust in a constant spotlight. As the Huffington Post points, out, if these women were men, we would hear praise rather than judgment. But, if Paltrow wears that hate, she wears it as well as her 2007 Zac Posen mermaid gown.

With '90s influences coming back into fashion in the past couple of years, I can only hope to see the return of the princess gown on the red carpet. Maybe everyone can all be princesses some day soon.