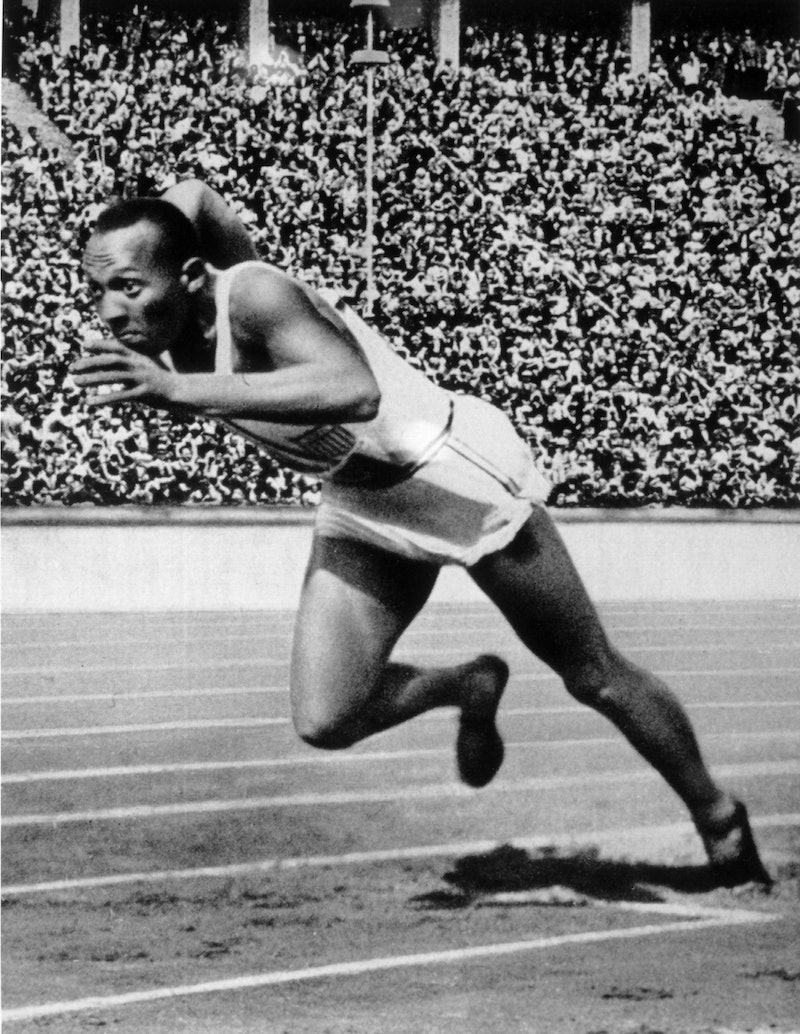 Prepare yourselves for a massive understatement: Jesse Owens was fast. The journey of the early 20th century track & field star through challenging circumstances to competitive glory plays out in big-screen technicolor in the biopic Race, coming to theaters on Feb 19. And though the film and star Stephan James (and probably some stunt doubles) recreate milestones in Owens’ legendary athletic career in the film, there really is nothing like the real thing. Fortunately, a few videos of Jesse Owens racing do exist. Even in grainy black and white, the runner’s untouchable speed comes across crystal clear.

Already a collegiate track celebrity during his time at Ohio State, Owens became an international superstar when he competed at the 1936 Olympics in Berlin. Hitler, whose racist propaganda included the biological “fact” that all other races were physically inferior to whites, watched as an African-American runner won gold medals in four different events. Owens racked up other honors including a number of Hall Of Fame memberships, a U.S. postage stamp in his likeness, and the naming of his alma mater’s track & field stadium. Read on to watch seven clips of Jesse Owens in action and see exactly why he became a global icon.

The announcer calls Jesse Owens "the one-man track team of Ohio State," proving that his performance at the Olympics was no fluke. Watch him easily win the 100-Yard Dash and the 220-Yard Low Hurdles, pretty much leaving his opponents in the dust.

Owens smashed through a record at the Inter-State championships in this short clip, setting the pace for the 200 at a frankly ridiculous 21.1 seconds.

Owens would often run in exhibitions in order to boost his income, including public events where he would race thoroughbred horses. This particular race also ended up in newsreel that probably ran before a motion picture.

"The world's most superb runner makes the others look as if they're walking," the commentator says as Owens wins another spot on the top of the podium in Berlin.

Imagine being in the stadium watching Owens change the world's understanding of what the human body is capable of. I'm the guy in the letterman's sweater, who's so amazed by Owens' 26 feet and 5 inches jump that he can't even stay seated.

In this relay, it looks as if someone hit fast-forward just on Jesse Owens, while the rest of the competitors stay at normal speed. No wonder he earned the title of the "Fastest Man Alive."

There's no sound in this clip, though it's no difficult feat to imagine the roar of the crowd. Owens clocked in at 20.7 on the 200 Meters, resulting in another victory for himself and the US Olympic Team.

Though Owens passed away in 1980, his legacy is secured and his achievements remembered. Race will bring his story to an even wider audience, and also underline the institutional and personal racism he had to endure.