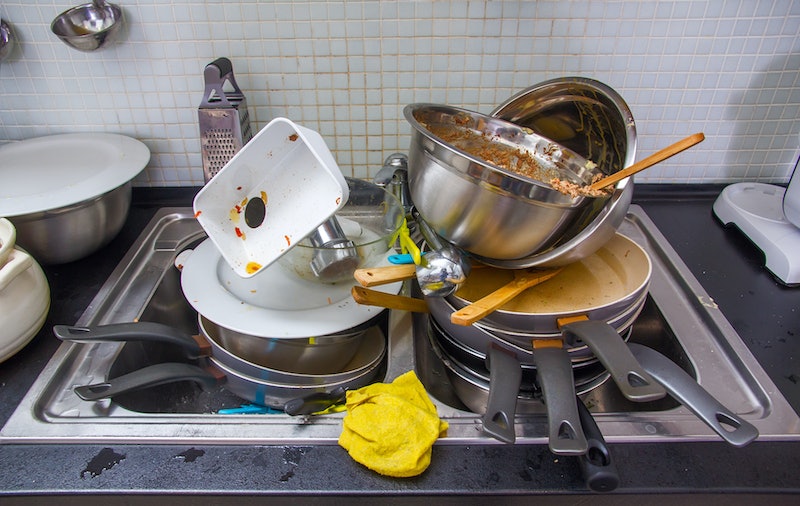 Recent research suggests that your cleaning habits (or lack thereof) may be affecting how you eat. A study published this month in Environment and Behavior found that a messy kitchen contributes to overeating. If, like me, you’re someone who likes to fill the sink with dirty dishes until there are literally no more clean dishes in your house, this report may be just the incentive you need to build a better kitchen-cleaning regimen. Or, you know, it’ll just make you depressed.

Scholars at the Cornell Food and Brand Lab attempted to test how physical environment affects eating habits by dividing 101 female undergraduates into two groups. One by one, half of the students went into a clean kitchen, and half went into a kitchen filled with dirty dishes, newspapers, and mail. “It was a mess,” study co-author Brian Wansink told NPR. The clutter was also accompanied by noises like ringing phones. The participants in both rooms were given snacks that included cookies, crackers, and carrots, and were instructed to write an essay about either a time that they felt in control or that they felt out of control.

The study didn’t assess which factors in particular (the clutter, noise, and so on) affected eating habits, but they were able to reach a general conclusion: “Being in a chaotic environment and feeling out of control is bad for diets,” explained lead author Lenny Vartanian, PhD. “It seems to lead people to think, ‘Everything else is out of control, so why shouldn’t I be?’” He also said that he believes the results would be the same with a group of male participants.

“The results suggest that an individual's mindset can moderate the impact of a chaotic environment on food intake, particularly for sweet foods,” the study’s authors explained to NPR. But although doing mental work to feel in control might offset the influence of a cluttered, loud kitchen, doing so might not be the most effective way to promote healthy eating. “Although meditation, as a way of feeling in control, might be one way to resist kitchen snacking for some, it’s probably easier just to keep our kitchens picked up and cleaned up,” explained Wansink.