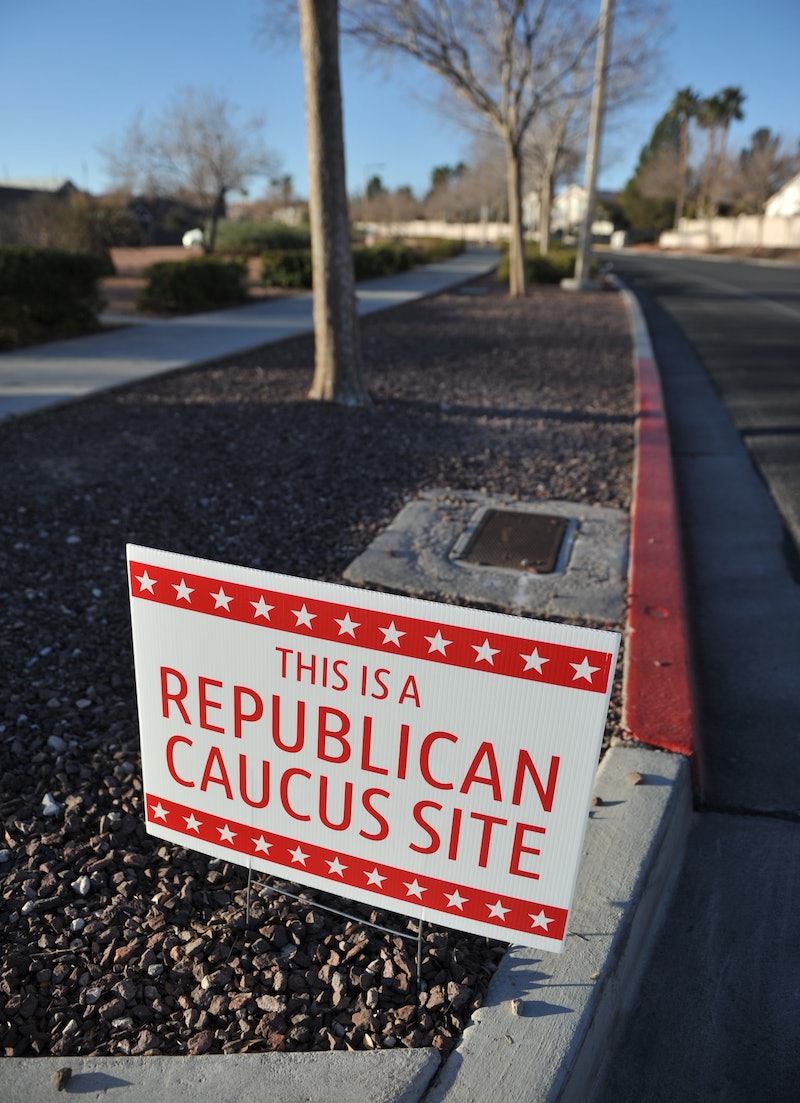 The next week will have a lot of action for those of you following the nomination races in both the GOP and Democratic Party. After the Nevada caucus, both races — but especially the Republicans — will become easier, if not necessarily easy, to predict. That's because, after Nevada, GOP candidates will probably have to drop out. The lesser-known candidates have had it easy so far — in a way — because they have been able to reach voters on a personal level, scheduling town halls, rallies, and campaign stops first in Iowa and New Hampshire, followed by South Carolina and Nevada.

That allowed candidates like John Kasich to make a big push in New Hampshire, where he came out with four delegates and second place. That all changes after these two states vote. After the Republican Nevada Caucus on Tuesday, the next big awarding of delegates is Super Tuesday, March 1, when a large number of states vote. The Democrats caucus in Nevada a bit earlier, this Saturday, but they have their South Carolina vote a bit later, Feb. 27, the Saturday immediately before Super Tuesday.

The Democrats after Nevada will be focused on South Carolina. Hillary Clinton seems poised to win in both contests. Polls had been pointing to the caucus on Saturday as easily going to the former Secretary of State. The most recent, though, show her tied with Bernie Sanders. Given that it's a caucus, it's hard to predict a winner.

Nate Silver at FiveThirtyEight projects Clinton coming out ahead by about 15 points if nationwide polling holds constant. If Bernie ties or even wins in Nevada, this will remain a close campaign to watch. Sanders will need to win the whiter and more liberal states on Super Tuesday and beyond at a pretty big margin to seriously take on Clinton — or reduce her strength with minorities, something that South Carolina would be a good indicator of.

For the GOP, the thing to look at after Nevada is Super Tuesday. If the underperforming candidates haven't already dropped out — that's John Kasich, Jeb Bush, and Ben Carson — they will need with Super Tuesday results in on March 1. A large number of delegates will be awarded. After Nevada, the candidates will have just one week to campaign in preparation, and the only way to reach the large number of states will be through national advertising and television appearances, something Trump has excelled at.

Furthermore, he — and to an extent Ted Cruz and Marco Rubio — should be helped by the qualifying thresholds on Super Tuesday. A majority of the states that vote on Super Tuesday require candidates to have between 10 and 20 percent of the vote before they're awarded any delegates. That would leave out John Kasich, Ben Carson, and Jeb Bush in nearly all the states with thresholds, based on the nationwide polling (obviously they might poll higher in some and pick up some delegates — Kasich will probably do better in Vermont, for example).

Then, the March 1 states with 20-percent thresholds, Alabama, Georgia, Tennessee, Texas, and Vermont (although again Kasich may do better here), could keep out everyone except Trump and Cruz. Even third-place Rubio may not get any delegates in these states if he comes in with levels near current polling (about 16 percent). Unless Kasich, Carson, or Bush knock it out of the park in South Carolina or Nevada — and it's looking like they won't according to the polls — the GOP race should be saying goodbye to those three candidates on or even before Super Tuesday.

These lower tier candidates could keep going, but there's really no point. Starting March 15, states can award their delegates on a winner-take-all basis — like Florida on , making it even harder for even second-place candidates to do well, let alone third through sixth. What will be interesting is to see if establishment support consolidates around Cruz or Rubio in order to have a serious competitor for Trump. Only time and Super Tuesday will tell.