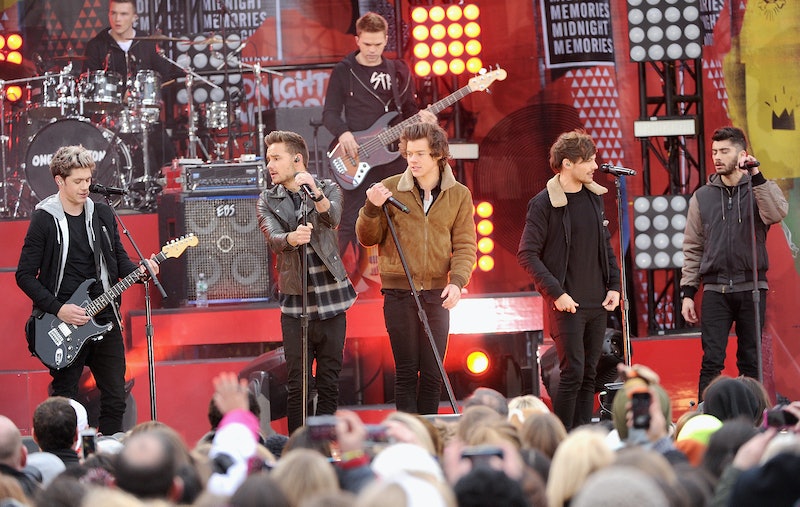 Apparently, the boys of One Direction know how to throw a hell of a crazy night on the town. Fresh off of the announcement by the International Federation of the Phonographic Industry that One Direction was named the Global Recording Artists of 2013, the British boy band released the music video for "Midnight Memories" on Friday. The video for the song, which is about making late-night memories with your friends, is just about the most epic night out we've ever seen/wish we've experienced for ourselves. And we're hoping that if we were to party with 1D, this is exactly how it'd go.

If you don't believe us, don't worry, because we're going to break it down for you into what the 5 stages of partying with One Direction would be, based on "Midnight Memories."

The video starts with everyone looking completely miserable at the lamest party you've ever seen (we know you've been there) when Harry Styles swoops in to save the day. (Harry! Harry! Harry!) The band decides to bounce and try their luck out on the town where they get into some serious hijinks that leave us wondering if we're really supposed to believe that no alcohol was involved. (I mean, they're all past the legal drinking age in England, after all.)

So, here they are, "The 5 Stages of Partying With 1D" as told by the "Midnight Memories" video:

Stage 1: GET THE HELL OUT OF THIS LAME PARTY

Knowing when to get out is important — thank you, Harry Styles, for being knowledgable in the art of ditching a lame-ass party. He came in, realized that we've spent more than enough time in this situation and suggested that we move on. A sign of a true leader.

After watching this, I feel terrible for every employee involved in one of my late-night McDonald's runs. Again, a good leader knows that you need to eat to make sure you can handle the long-haul of the night. So, the first stop is Kali Kebab to terrorize the employees and otherwise wreak havoc. Also, try to tell me again that they're not drunk — because this looks like a classic case of the drunchies to me.

"OMG I LOVE YOU!" — You to every new person you meet when, again, you're drunk. And if you're with One Direction, your new friends will be a brigade of older women on motorized scooters. Which is AWESOME.

If you were ever going to hijack a vehicle during your wild night out, a police boat to cruise around the Thames seems like the ultimate best choice. We're just mad that One Direction thought of it first.

There's always one person willing to get involved in a potentially harmful activity — apparently all of 1D is down for that at the end of a wild night. "Hold my leather jacket, I'm getting up there." We can't deny that ending your night on top of the Tower Bridge would be pretty damn cool.