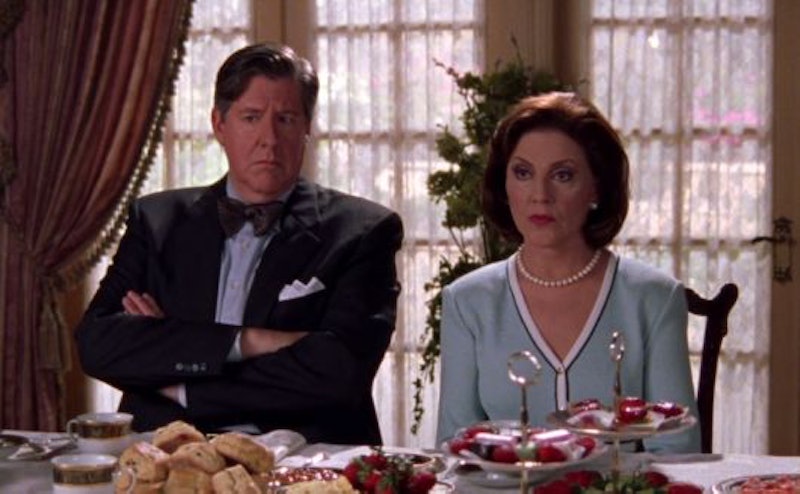 With the exciting news of the Gilmore Girls revival coming to Netflix, fans' minds are swirling with ideas of what could possibly be going on with our favorite characters all of these years later. From speculation about Rory's love life to thoughts on where Lorelai and Luke now stand, it's hard to not be excited. However, there is one heartbreaking fact about the show that needs to be taken into consideration: Edward Herrmann (aka Lorelai's dad Richard Gilmore) will not be returning for the highly-anticipated Stars Hollow reunion. After the actor passed away from his battle with brain cancer in 2014, the cast mourned the loss of their beloved co-worker. But now the Gilmores need to continue on without their family's main patriarch, which not only makes me curious about what is going to be said for Richard Gilmore's character, but also makes me wonder if Amy Sherman-Palladino is going to let the revival wander where no one ever thought they would see it wander before. Is Emily going to date someone new in the Gilmore Girls revival?

I know, I can't believe I typed those very words either. However, the suspicion about how Emily is handling being a widow can't seem to not linger in the back of my mind. After all, Emily Gilmore has always been a social woman who is dependent on status and companionship. I wouldn't be surprised if she decided to — after a long time of mourning — get back out there in the dating field. Despite Lorelai mourning the loss of her father as well, for some reason, I don't see Lorelai as being someone who would be completely opposed to the idea of Emily finding a new love in her life. In fact, if anyone is going to be uncomfortable with that type of situation, I would have my bets on Rory, considering how close she was with her grandfather throughout the course of the show.

While I do believe an emotional farewell to Richard Gilmore would take place prior to the show jumping into anything, I wouldn't totally rule out the possibility. And what makes me more suspicious that this could actually happen? Despite all of her loyalties, we as an audience have actually seen Emily Gilmore explore her curiosities in other men before. There was the time when she was (briefly) separated from Richard in Season 4, and, even before then, there was the time when she got hit on by other men after skipping the spa and spending a day out with Lorelai. It would be something so hard to watch coming from the remains of the original Yale-going lovebirds, but, unfortunately, it's also a possible inevitability.

So, Gilmore Girls fans, I would get out the tissues before you start marathoning the Netflix revival. The unthinkable could actually happen.

More like this
Emma Thompson, Lashana Lynch, & Stephen Graham Lead Netflix’s 'Matilda'
By Sophie McEvoy
15 Intriguing Movies On Netflix That Are Based On True Events
By Mary Kate McGrath, Shannon Barbour and Grace Wehniainen
Everything We Know About When To Expect The Rest Of The Upshaws Season 2
By Kadin Burnett
Who Is 'Stranger Things 4' Fan-Favorite Joseph Quinn Dating IRL?
By Grace Wehniainen
Get Even More From Bustle — Sign Up For The Newsletter