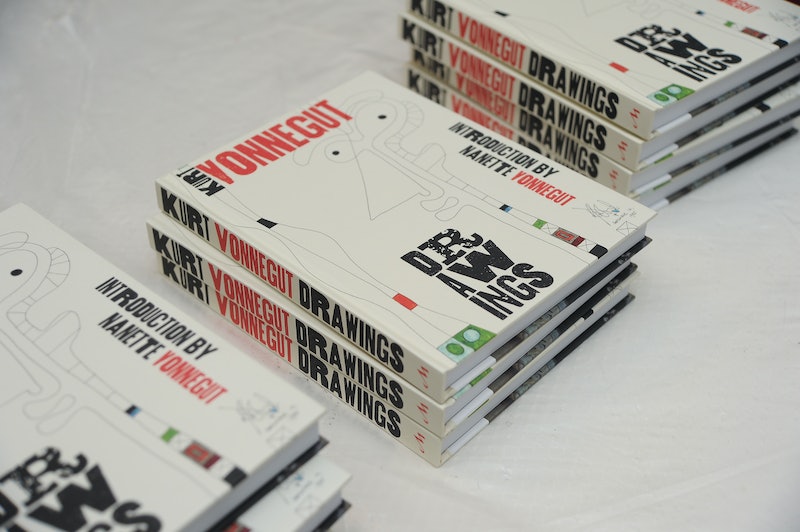 Do you remember where you were on April 11, 2007? I was in the dorm room of a friend, in the middle of my sophomore year of college. They were telling me to sit down, very serious looks of concern on their faces. I don’t remember what I thought it was about, perhaps one of the myriad little dramas that accompany anyone below the age of 19. Maybe my first college ex-boyfriend had moved on to another girl in our little group who had been flirting with him, maybe I was doing something socially wrong (I was pretty much constantly doing something socially wrong from that age of 17 to 23) and they were trying to gently correct me. All I know is that I didn’t expect what was actually wrong.

“Kurt Vonnegut is dead,” one of my friends said. It was in that moment that I felt the bottom fall out of my stomach as I realized that my favorite author of all time, one of the biggest literary influences on me up until that point was gone.

I was a nerdy 15-year-old girl when I first was introduced to the works of Kurt Vonnegut, and “nerdy” doesn’t even begin to describe it. I once wrote a book report about the novelization of Star Wars: The Phantom Menace. I was the girl who brought books to my brother’s sports games and I used to get in trouble in math class for hiding a book in my desk. I was painfully nerdy, but up until that point I lacked direction. I didn’t exactly have a favorite author (although Douglas Adams springs to mind in a pinch), and while I loved reading, I couldn’t properly explain why. I devoured books for plots and characters, but I never thought any deeper than that.

That is, until my brother had to read The Sirens of Titan for his senior year English class. Hopefully the statute of limitations has passed on the crime of fraud my brother and I committed, because in a very “teen movie” twist of reality, I ended up reading the book for him.

And oh, what a book it was. Vonnegut’s tale of Malachi Constant and his journey to Mars, Mercury, and eventually Titan was more than just a science fiction romp. To me, it was poetry. It was heartbreaking. It made me feel feelings for even the most unlikable character. It introduced me to the Tralfamadorians, an alien species that Vonnegut sprinkled across his works, and made me admire this completely alien species in a way that I never thought I really could.

Not to be stopped, I immediately began a mission to buy and read every single book he had ever put out, and dedicated an entire shelf of my bookcase to this endeavor. Every trip to the bookstore was tinged with the excitement of adding to the shelf as I threw myself into the strange and often connected world.

His ideas became a part of me. His “unstuck in time” idea of the afterlife from Slaughterhouse-Five has become a certain sort of semi-religious belief system in my own life. The idea of bouncing through your life, reliving parts of it after you’ve died is uplifting to me in a way. Vonnegut’s concept of the karass, or a group of people pushed together by fate due to a spiritual link has severely influenced how I see my friends. Perhaps it’s an overly romantic way of looking at things, but isn’t it nice to look at the group of people you are closest with and think that there’s some sort of cosmic reason behind it? I carry that with me all the time, and it’s all thanks to Kurt Vonnegut.

When I graduated high school, my senior quote was from The Sirens of Titan: “The purpose of human life, no matter who is controlling it, is to love whoever is around to be loved.”

When I went to college in North Jersey staring in the fall of 2005, I would look at the New York skyline and carry the knowledge that Kurt Vonnegut was wandering somewhere in the city that I also loved. I used to dream of running into him while he sat on his stoop in Greenwich Village, but I never could imagine what our conversations could end up being. Although I lived 12 miles from the city where he lived, I never once went there, I never once attempted to do one of those casual run-ins that seemed to happen pretty often in those days.

Then came April 11, 2007, and whatever could have happened never would. I mourned him, even buying a pack of Pall Malls (his preferred brand of cigarette) and smoked one in his honor. I don’t recommend this for obvious reasons, for not only is smoking terrible, but it’s not going to make you feel closer to any of your heroes who still do it. I read his books in his honor, and then I moved on. If there was anyone who seemed to have such little interest in being mourned for an extended period of time, it must have been Kurt Vonnegut.

If there was anyone who seemed to have such little interest in being mourned for an extended period of time, it must have been Kurt Vonnegut.

So I moved on, but never stopped loving him. His minimalistic style just seemed like the truth to me. His characters never seemed to be truly happy, and their happiness never seemed to be as romantic as the happiness that other books seemed to have. They seemed so real, so true, and because of that they made me feel like I was real, and I was true. Kurt Vonnegut’s eccentric characters made me feel like anything I felt that was weird, or any eccentricity I carried was perfectly normal.

I carried him with me throughout college on a deeper level than I originally thought. I began to realize that my relationship with my college boyfriend probably wouldn’t work out the day he called Vonnegut a “hack science fiction writer.” I first realized that I wanted to kiss a particular doomed love during that time thanks to his reverence for the novel Timequake (I never said Vonnegut led me in exclusively good directions!). During my third year as film student, I was charged with adapting something literary to film, and the first and only option I knew was Vonnegut’s incredibly bittersweet short story “The Long Walk to Forever.”

Five years and one Tralfamadorian tattoo later, I still love his works just as much as I did back when I was that nerdy 15-year-old girl buying up his books with the excitement of a book nerd who finally realized why she loved books in the first place.