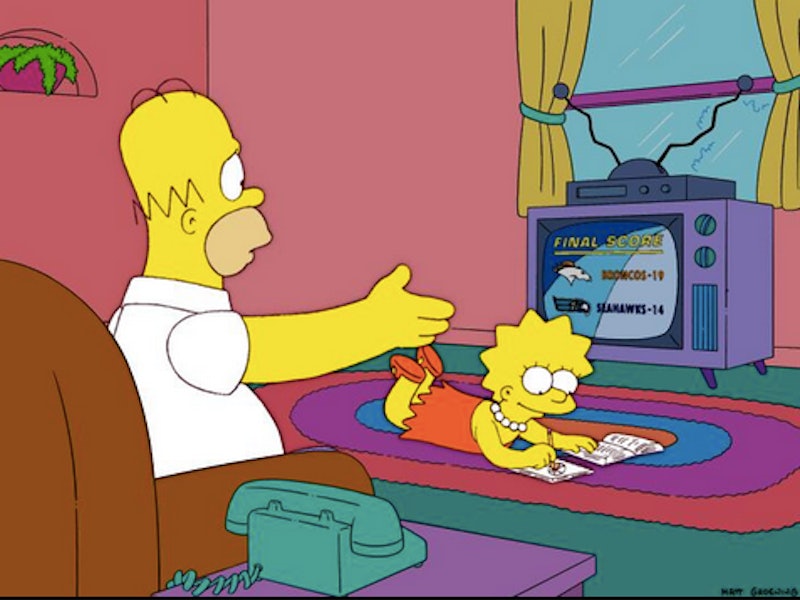 The Simpsons' relationship with the Super Bowl is almost as long as my lifelong relationship with the show itself. As pointed out by The Simpsons ’ official Twitter account, the show actually predicted the outcome of this year’s game way back in 2005. In the episode "Bonfire of the Manatees" in Season 17, we see a shot of the final score: Broncos, 19 and Seahawks, 14. If this actual score or even the Broncos win comes into fruition, it will only push the South Park myth of, “The Simpsons Already Did It!” into reality.

In the episode, Homer gets into trouble with Fat Tony and his various goons for gambling on football and (of course) not being able to pay off his debt. Spoiler alert: After Homer saves herd of manatees from the harm of jet skiers (just go with it) everything turns out fine.

So here’s hoping during this year’s Super Bowl, no manatees or dignities have to get harmed in the process of crowning a champion. But it's likely that The Simpsons will continue to merge football with the ridiculous. After all, the episode that came complete with this year's Super Bowl prediction is just one of many football-centric episodes that have been featured on The Simpsons. (It certainly helps that the show airs on Fox, allowing the sitcom to poke fun at the closely affiliated NFL.) Homer’s love of beer is not a far cry from his love of football. Here’s a look at Springfield's history with the gridiron, in celebration of this Sunday's surefire win for the Broncos:

Homer and Springfield’s ragtaggiest ragtag crew caravan to Miami for the Super Bowl... only to discover their tickets are counterfeit! Havoc ensues and the fellas must sneak their way into the stadium. It doesn't go well. Sure, the episode aired right after Super Bowl XXXIII and football is a big deal. But the REAL star of this Season 10 episode was "Vincent Price’s Egg Magic."

Joe Namath and Johnny Unitas Broke Up Abe and Mona

In a flashback scene, when Homer’s mother Mona left Abe, he was watching the Super Bowl. When she saw the football star on screen, she decided to follow a life inspired by his wild, untamed hair. As Abe himself noted "Look at them sideburns! He looks like a girl! Now, Johnny Unitas, there's a haircut you can set your watch to!" And just like that, Mona and Abe were too different to stay together. Because sometimes, The Simpsons can actually break your heart.

The Greatest Headline on Earth

Okay, okay it’s not technically the Super Bowl, it’s Springfield’s version thereof. In the episode “Homer Loves Flanders,” Homer begrudgingly befriends Ned, who won impossible-to-get tickets on KBBL to see the Springfield Atoms play against the Shelbyville Sharks. It’s not the writers’ favorite episode, but it did give us Homer’s nacho hat and this most famous GIF:

(Thanks Brandon Straud and Josh Kurp At Uproxx for pointing this out!)

SERIOUSLY, even Drake can’t escape The Simpsons curse. Anyway! In this Season 8 episode, Homer is given ownership of the Denver Broncos as a consolation prize for having to give up his job with Globex in order to return to Springfield.

In the Golden Age of the Simpsons, Season 3’s episode “Lisa the Greek” is all about Daddy-Daughter Day. Homer discovers Lisa’s knack for predicting NFL winners and starts buying her love (and predictions). Lisa is of course heartbroken when she finds out Homer is using her for gambling purposes. And like all great Simpsons episodes, there’s a huge change of heart by our bumblingly lovable patriarch.