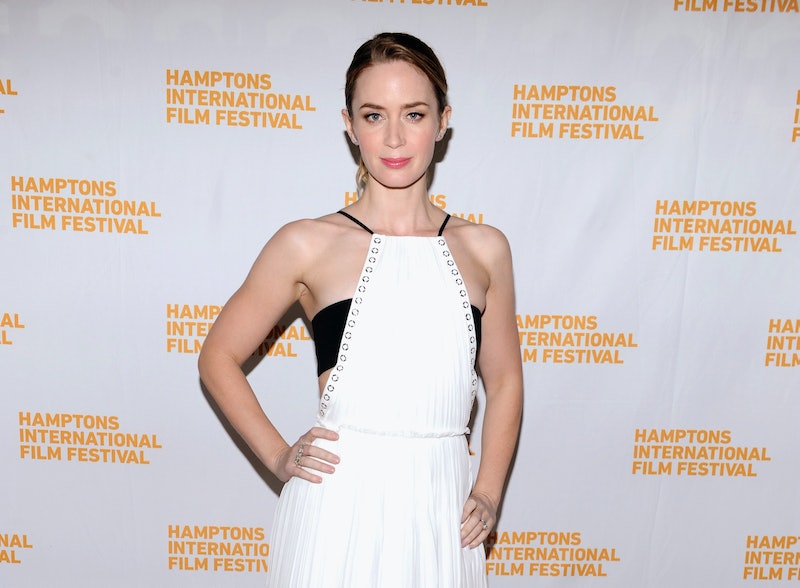 A beloved icon is getting a revamp. According to The Hollywood Reporter, a new Mary Poppins movie is on the way, but it won't be a reboot as many fans might expect. Instead, the upcoming film, which is set to be directed by Rob Marshall, will be a "sequel" of sorts to the 1964 movie, and set 20 years after the events of the movie musical. The original film, which starred Julie Andrews as the titular character, will be casting a new actress to play the magical flying nanny, and there's already one star at the top of the list. As reported by The Hollywood Reporter on Thursday, Emily Blunt is in talks to play Mary Poppins in the sequel — and honestly, the role sounds perfect for the London-born actress. The real question, of course, is whether Blunt will have to sing should she take on the part — and it has me googling up a storm of clips of Emily Blunt singing like you wouldn't believe.

Blunt isn't an actress that most associate with movie musicals, but should the Mary Poppins sequel go the route of the first film, Blunt will definitely be exercising her pipes. Fortunately, she has them. The actress proved her prowess with her role as The Baker's Wife in Into The Woods — but that isn't the only time fans have seen her sing. Here are just a few musical moments featuring Blunt that prove she can step into Poppins' shoes, should she accept the part:

Blunt appeared on film critic Peter Traver's talk show, and belted out a few bars of "Dream A Little Dream" — despite admitting that singing in front of another person makes her super "nervous."

"Moments In The Woods," Into The Woods

The Baker's Wife's post-adultery song proves that Blunt can carry a musical number while also acting the hell out of it.

Blunt scored a Golden Globe for her role in the miniseries Gideon's Daughter, possibly in part because she knocked this original song out of the park.

"It Takes Two," Into the Woods

Bustle's Leah Thomas ranked this song as the best on the Into The Woods soundtrack, and for good reason: it's definitely amazing.

Not technically singing, but hey, I like the way she works it.

OK, maybe this isn't Blunt's greatest audition for the role of Mary Poppins (after all, what fun is karaoke if you sing it well?) but how could I not include this on the list?

Do us proud, potential Mary Poppins 2.0.!