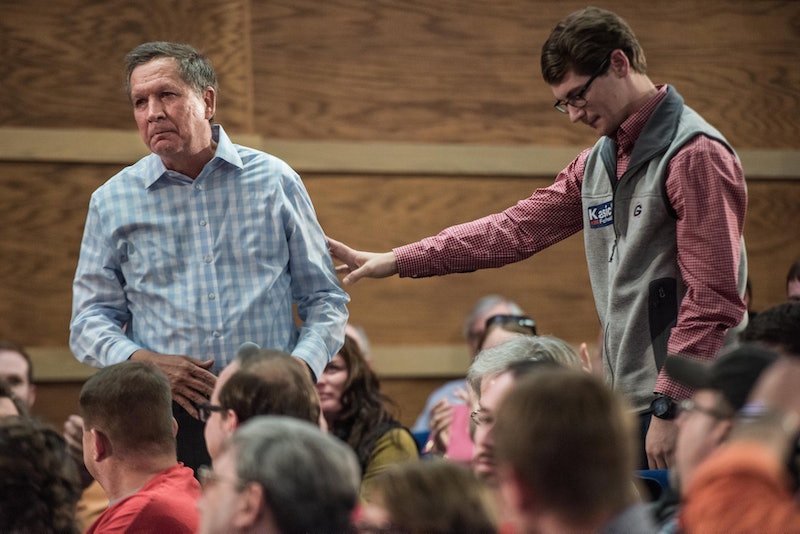 Presidential candidates are often asked about tax reform, foreign policy, and occasionally what color they'd prefer the drapes in the Oval Office to be, but hugs? Not unless you're John Kasich. During CNN's second South Carolina town hall on Thursday, Kasich was questioned about an emotional hug he shared with a young supporter earlier in the day.

During the Ohio governor's own town hall event at Clemson University, a young voter shared his personal reason for supporting Kasich "unwaveringly," who he said gave him hope during a dark time.

"Over a year ago, a man who was like my second father killed himself, and then a few months later, my parents got a divorce and then my dad lost his job," a young man, later identified by ABC News as 21-year-old Brett Smith, told Kasich. "I was in a pretty dark place for a long time. I was pretty depressed, but I found hope in the Lord, my friends, and now I’ve found it in my presidential candidate that I support. I'd really appreciate one of the hugs you’ve been talking about."

Kasich was quick to dole out one of his infamous hugs and can be heard telling Smith, "The Lord will give you strength, I promise you, if you ask him."

His campaign wasted no time in sharing the moment on social media, and within hours, the hug had gone viral. The hug's impact on the day's political conversation proved so big even CNN's Anderson Cooper asked Kasich about it during the cable news network's town hall event.

"We all need to slow down a little bit," Kasich told Cooper, when asked about how the incident affected him both as a person and as a politician. The Ohio governor said the moment encapsulated the need for politicians to step back from the political frenzy and listen to the struggles and issues of the people they serve:

There are a lot of people out there who are lonely and they're looking for a place to tell people about their issues. The strength of America is not some guy or woman coming in on a white charger to solve our problems... the glue of America is right here in this room. It's in our communities, it's in our families. We need to slow down and we've got to carry out our God-given destinies and potential and gifts. I've learned so much from, listen, everyone here, you've got to celebrate everyone else's wins and sometimes you've got to sit with them and cry. That's what we need in our country. It's up to us to rebuild our country and renew our spirit.

Meaningful connections with voters are campaign gold for any presidential candidate, and Kasich certainly isn't the first politician to hug it in front of the cameras. What makes this moment significant for Kasich, however, is that it has given him a visceral example to tie his message of compassion to, a message largely reminiscent of his New Hampshire primary speech. With South Carolina's Republican primary just days away, will the hug help Kasich pull ahead with voters?

More like this
The Most Powerful Photos From The Weekend’s Abortion Rights Protests
By Melanie Mignucci
Police Shove 'Full House' Star Jodie Sweetin At An Abortion Rights Protest
By Radhika Menon
5 Ways To Stand In Solidarity With Women In America From The UK
By Sophie McEvoy
How To Fight For Reproductive Rights, Based On How Much Time You Have
By Courtney Young
Get Even More From Bustle — Sign Up For The Newsletter