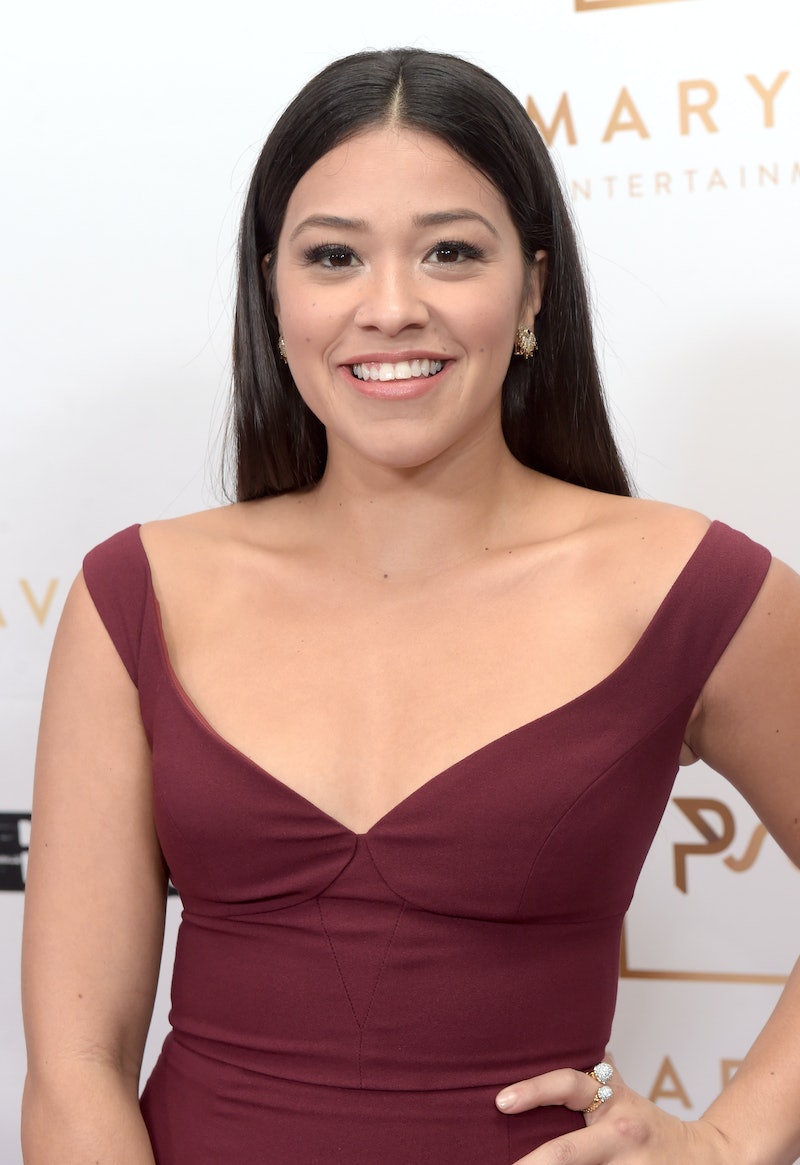 Hold the phone. Is Jane the Virgin star Gina Rodriguez joining Dancing With the Stars? It sure seems like she wants to, which means not only would I start tuning into the ABC dance competition, but the Golden Globe-winning actor might change the minds of people who think it's run it's course and should be cancelled. Whether it happens or not, all that matters right now is Gina Rodriguez and Derek Hough want to be DWTS partners. Are you already picturing their amazing dance routines? Me too. Me too.

Hough stopped by Yahoo! and after being asked about who he'd love to dance with on DWTS, he chose Rodriguez, obviously. He said, "Gina Rodriguez from Jane the Virgin! She can salsa dance and I think we could make a great team." Hough, you have never spoken truer words. Guess what? The 31-year-old TV star agrees.

Someone pointed out Hough's response to Rodriguez on Twitter and she freaked out with excitement. She tweeted the dance pro and said, "Why have you not told me this @derekhough?! #letsdoThis." Then, Hough answered her with: "@HereIsGina #letsdothis But for real though."

So, not only does Rodriguez seem very serious about partnering up with Hough for DWTS, it seems like this could very well happen.

Why wouldn't DWTS want to have her join the next season? She is one of the biggest stars. She has a huge following. Everyone loves her. Basically, Rodriguez would be ratings gold.

That said, do I think this will happen? No offense to anyone who has been or will be featured on the reality series, DWTS doesn't usually feature A-list stars. Yes, Rodriguez is an A-list celeb. Not to mention, she's super busy starring as the lead of Jane the Virgin and doing whatever else she has lined up.

That doesn't mean she won't or can't do it. I'm sure Rodriguez is a pro at multi-tasking. Let's face it, she is beyond talented. I, for one, wouldn't mind seeing her dance it up on live television on a weekly basis. From time to time, she'll share videos on Instagram of herself salsa dancing. Yes, as I'm sure you can imagine, she has moves.

Now imagine Rodriguez and Hough salsa dancing together. *Chills* Hey, if she doesn't end up on DWTS, maybe, just maybe, Hough can head on over to JTV and dance it up with Rodriguez's character, Jane Villanueva. *fingers crossed*