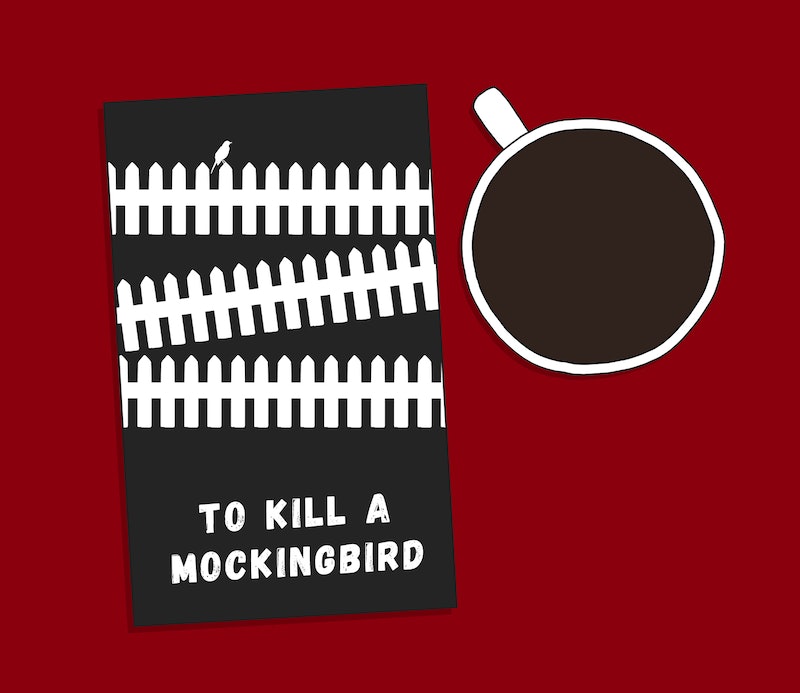 "When he was nearly thirteen, my brother Jem got his arm badly broken at the elbow. When it healed, and Jem's fears of never being able to play football were assuaged, he was seldom self conscious about his injury." I've read these lines, the beginning of To Kill a Mockingbird, hundreds of times. They are some of the most comforting lines in the literary canon for me. They have a magic effect on my nerves, and even now when I read them, I feel myself breathe more fully. I feel like a door is opening.

As a kid all the way through college, my music career has been plagued by stage fright. It wasn't that I was afraid of playing, but more that whenever I performed, I would become so afraid of messing up that my entire body would seize up, my brain would stop, and I would completely lose control over my playing ability. Music that I could play backward and forward in the practice room would often just sputter and die.

But when I was in eighth grade, I brought Harper Lee's To Kill a Mockingbird along to my District Band audition just to have something to read while I waited. I fell into the story, and by the time I was called up, the book had managed to relax me and I nailed the performance. I got first chair, and for the first time I felt like I was a great musician. Convinced that the book had done it, I took it along with me to every single audition I've done since.

I'm not the only musician to have a ritual like this. People have lucky ties and favorite breakfasts. My checklist for audition days soon became horn, mouthpiece, music, glasses, valve oil, To Kill a Mockingbird. When I auditioned for college, I toted my copy with me across the country, reading it over and over again in warm-up rooms and outside professors' offices. When I was in college, studying Music Education, I would bring it along to ensemble auditions and even lessons I was worried about. No matter where I was, when I opened up that book, Harper Lee could transport me to a place where I felt safe.

It's not just the captivating storytelling that made To Kill a Mockingbird such a perfect book for auditions. Its resounding lessons about courage are the exact fire you need when you're about to perform. Scout's world is filled with terrible incidents, everything from lice to lynchings, and in the face of this, the characters make conscious decisions to do the right thing and to do their best. They look challenges in the eye, and they charge ahead. Even when they don't do well, even when they're utterly screwed, they pick themselves up, dust themselves off, and fling themselves back in, head first. As Atticus says, "Real courage is when you know you're licked before you begin, but you begin anyway and see it through no matter what."

And much of To Kill a Mockingbird is about interpreting the world and finding goodness ― which is the very core of what music is. Just as Scout strives to understand every person around her, a good musician must look at every piece in front of them and pull the humanity out of it. This is the important difference between hitting the notes correctly and making the audience feel. Harper Lee, of course, was brilliant at making her audience feel.

And much of To Kill a Mockingbird is about interpreting the world and finding goodness ― which is the very core of what music is.

I found out Harper Lee passed away while I was on the subway, in an e-mail from my boss marked "URGENT." It's an odd moment, to privately hold news of a death while the rhythm of life continues to move around you so innocuously. And in this moment, it truly felt like a close friend had died. Harper Lee had been right with me throughout some of the most stressful parts of my young life. She's been the hand holding mine in the face of fear, the voice that helped me believe in myself.

More like this
'Mayfair Witches' Already Changed 2 Major Characters From The Books
By Grace Wehniainen
Prince Harry Incorrectly Recites Christina Aguilera’s “Genie In A Bottle” Lyrics
By Jake Viswanath
Your Guide To Watching 'Everything Everywhere All At Once' In The UK
By El Hunt and Sophie McEvoy
You’ll Definitely Recognise Isadóra Bjarkardóttir Barney’s Mum
By Maxine Harrison
Get Even More From Bustle — Sign Up For The Newsletter
From hair trends to relationship advice, our daily newsletter has everything you need to sound like a person who’s on TikTok, even if you aren’t.