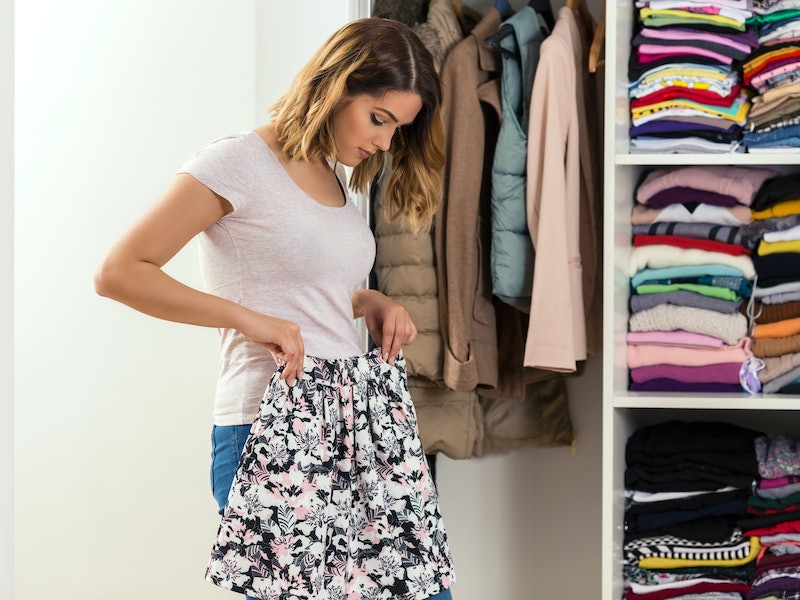 It occurred to me recently that I might be a hoarder. Not A&E worthy or anything, but one look at my closet proves the undeniable: I have a problem giving away clothes.

I first realized I have this issue while home visiting my parents. I was shopping with my mom, and when I pulled out my wallet, she gasped with overdramatic horror. "You still use that?" She pointed to my dirty, falling-apart wallet.

I just shrugged. "Yeah. I've had it forever," which was only marginal hyperbole. While I haven't had my wallet forever, I have had it since sophomore year of high school. It's not that the wallet was crazy-expensive and I can't bring myself to give it up for strict reasons of, "But I paid a lot of money for this." It's not even that I particularly love the style of the wallet, especially not in its six-year-old condition. What was once a cheery yellow hue has turned brown. Remnants of the Lisa Frank stickers my friend slapped on my wallet without asking circa 2008 still remain. The coin compartment is a waxy, disgusting mess, made that way after I put candles from my 21st birthday in there ("I want to save them forever," I said, not thinking about the fact that, oh, yeah, wax totally melts and breaks). So, why would I possibly want to keep what is essentially a piece of trash? Well, for all the reasons I just listed.

My wallet, in all its gross glory, is like a tiny time capsule. Those half-torn Lisa Frank stickers, while tacky, bring me back to being 17 and hanging out in the parking lot of a Michael's craft store with a girl I no longer really speak to. Every time I reach for a quarter and am instead met with a piece of sticky pink wax, I remember how I felt so loved by the surprise party my friends threw for me that I was brought to "happy tears" for the first and only time in my life. That wallet has been with me to prom, and my first day of college, and my semester abroad in The Netherlands, and my first night out after moving to New York, and what? Now I'm just going to let it go? I know it sounds insane, but agreeing to let my mom buy me a new wallet (which I did eventually do) felt like letting a piece of my childhood go. Over the course of eight years, that simple Urban Outfitters wallet has taken on a new importance, a new weight. It was a relic of my lives once lived in Florida and Boston, which I wouldn't necessarily want back, but do sometimes miss.

After what will hereby be known as "The Great Wallet Debacle," my mom made me clean out my closet. "You don't wear any of this stuff. You don't even live in the same state as it," she said. I tried to fight it, but she was right. I have absolutely zero use for a tulle turquoise dress that is two sizes too small, and "But I wore it to homecoming one year that I didn't even really have fun at homecoming!" is not a sufficient reason to keep it.

Cleaning out my closet and putting nearly every item into a "give away" pile was equal parts heartbreaking, cathartic, and bizarre. Everywhere I looked, there were glimpses of the girl I was in high school, a person I still have some things in common with and still look like, but increasingly less every year. The once-cherished sweatshirt of a guy who now means nothing to me, even though I used to be convinced he would always mean everything. The dress I wore to my Sweet 16 that I used to see as stunning and now merely see as tacky. The college sweatshirt my mom gifted me when I was accepted into my dream college, out of which which I would later transfer. I have no need for any of these items, so why did I feel a tiny piece of my heart breaking off every time I threw something in that pile to be carried away? I think some part of me illogically believes that, if I keep these items, I can hang on to the memories and the people attached to them, even long after I've forgotten the inside jokes and deleted their numbers from my phone.

There's a Joan Didion quote I've loved ever since I read it. Speaking of cleaning out her closet, she writes, "I closed the box and put in a closet. There is no real way to deal with everything we lose." The fact is, I will never again be 16 and hanging out in the parking lot of a South Florida shopping center, and keeping the wallet I wore when I did isn't going to mean I will be. It's just going to mean that I have a crappy wallet. But I can — and do — take comfort in knowing that those moments, even the seemingly insignificant ones, changed me. As the inside jokes get even hazier and the wall that separates me from people I was once close to gets even higher, the way those times made me grow and learn cannot be put in a "give away" pile.