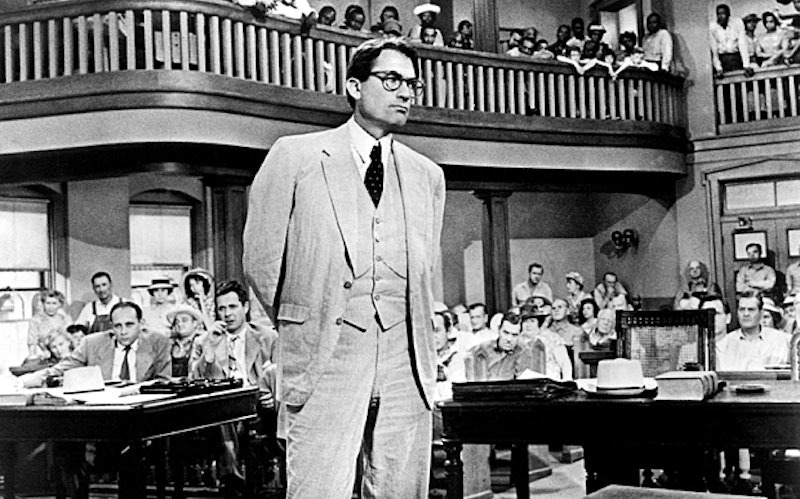 I've wanted to grow up to be like Harper Lee ever since the moment I was first introduced to her writing as a kid, so Harper Lee's death at 89 hits me right in the gut. The only surefire way I've found of dealing with these kinds of sucker punches is to celebrate the lives of the person whose death has devastated me. That's why I think every fan can benefit from watching the most memorable scene from To Kill A Mockingbird one more time, especially if it's been a while. And, to me, the scene that best exemplifies the world memorable is Atticus Finch's cross-examination of Mayella Ewell.

The classic book was turned into a movie in 1962, starring Gregory Peck as Atticus Finch, and, oh boy, does it hold up. I'm not a film expert by any means, of course, so when I say "it holds up," what I mean is is that certain scenes from it are indelibly burned into my memory forever and ever. That's really one of the highest endorsements of a movie I can offer, because, most of the time, details fall out of my brain at an almost comical rate. But that never happened with To Kill A Mockingbird, and this scene simultaneously exemplifies Lee's skill at building tension within the plot and her ahead-of-her-time awareness of the obstacles that people of color faced in a white supremacist society.

In this court scene, Atticus Finch cross-examines Mayella Ewell, the woman bringing the sexual assault charges against Atticus' client, Tom Robinson. Mayella has testified that Tom choked her, and Atticus attempts to show the court why that version of events is impossible.

The tragedy of the scene, the book, the movie, and, honestly, real life, is that Tom is not acquitted of the crime. Even though Atticus shows beyond a shadow of a doubt that his client isn't capable of inflicting the type of injury that Mayella has suffered, it's a white woman's word against a black man's, and Tom is still convicted of rape. While that's a gut-wrenching thing to read and watch, it's also proof of Harper Lee's self-awareness, courage, and intelligence; she wrote a story with an unhappy and unfair ending to reflect back to us our own lives and our own prejudices. She didn't shy away from portraying racism and the ways that endemic discrimination has crippled our legal system. She put all that right out front, staring it right in the face, and if you couldn't stare back, then that was on you.

That was the beauty and the intelligence and the fire of Harper Lee, and this scene expresses that better than anything else. By honoring her work, we are honoring her, and what her legacy has contributed to the literary and cinematic world. Watch this scene, watch this movie, read her books, and remember what an icon that Harper Lee was and will always be.