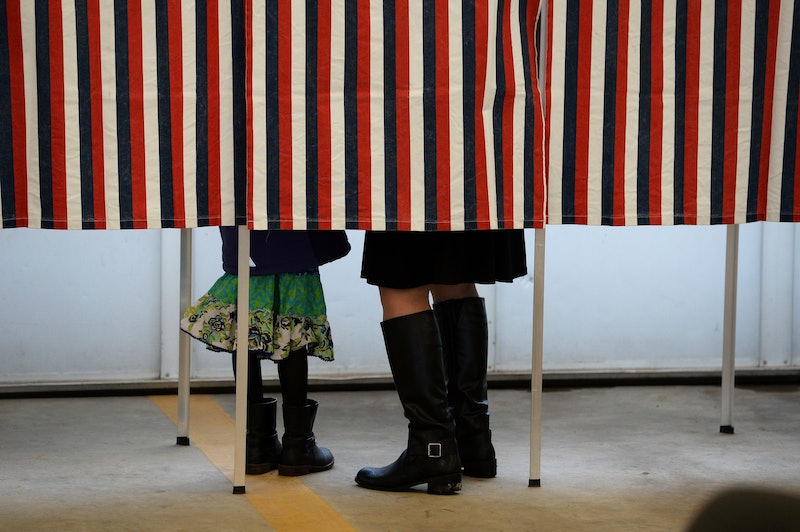 That's right, all you die-hard fans of the presidential horse race: It's almost here! On Saturday, Republican voters in the state of South Carolina will be lining up to cast their ballots in the primary, in a moment that could end up (especially if front-runner Donald Trump wins big) determining the outcome of their party's nominating race. But will it just be Republicans who're making that call? What type of primary does South Carolina have?

If you're a veteran political follower, you might already know about the difference between open and closed primaries, but if not, there's no shame in that! Here's the basic idea: The majority of states that hold primaries keep them closed, which means that only registered members of the respective parties can cast a vote. So, if you're a Republican, you can only vote in the Republican primary, and the same for the Democrats.

But that's not how things work in South Carolina. That's because the Palmetto State holds open presidential primaries, which don't require partisan affiliation to participate. In other words, if you're a registered Democrat but you're less invested in the outcome of your own party's primary than the GOP's, you can vote in theirs instead, and vice versa. Similarly, if you're a legitimately independent voter, you have the flexibility to make your own choice.

In the past the state's open system, combined with its massive importance on the primary schedule, has stirred up some controversy. Notably, John McCain carried the state in 2008 en route to the Republican nomination, despite Mike Huckabee beating him by three points among registered Republicans. This was the same election cycle which saw conservative radio blowhard Rush Limbaugh urge conservatives in open primary states to vote for Hillary Clinton, to try to thwart Barack Obama's historic ascent ― he dubbed this scheme "Operation Chaos."

Now, I know what you might be thinking: Isn't it a problem to let anybody vote in either primary? Why wouldn't everyone vote in each primary, and try to elevate the candidate they thought was the most easily defeated in a general election? The short answer is because you're not allowed ― as Rudolph Bell noted for Greenville Online, you have to pick one primary and forego the other.

Nonetheless, it still makes for an opportunity for some highly strategic voting, especially if you've got a predicted blowout on one side and a neck-and-neck race on the other. That's what Limbaugh was pulling for all those years ago, although to what extent it ultimately mattered is unclear. For what it's worth, though, it's probably best to just stick to the primary of the party that matches most closely with your own beliefs ― however loathsome you might find the opposition, messing around with their nominating process (at the expense of casting a vote in your own) is slightly poor taste.

Just remember: If you're a registered voter in South Carolina, you're good to go, regardless of which primary you're voting in. They won't be going down on the same day, either ― the Republicans are leading off on Saturday, but the Democratic primary won't be held until next Saturday, on Feb. 27.