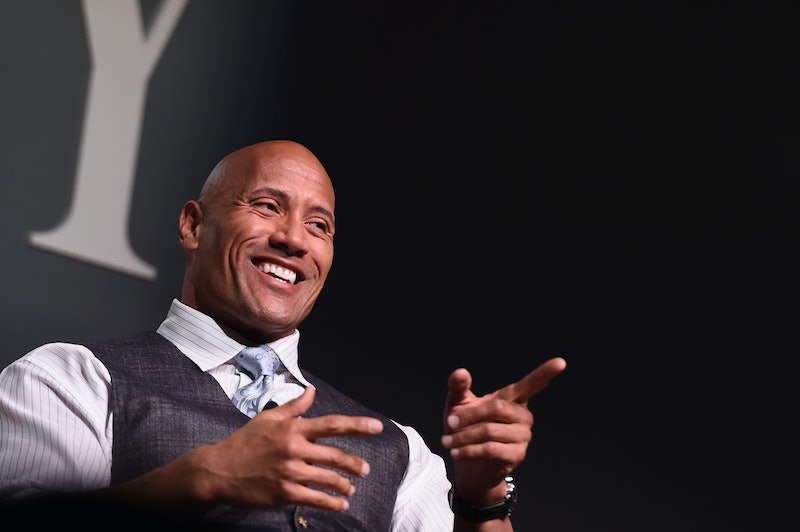 Forget the Oscars, Hollywood's best awards show is, hands down, the less stuffy MTV Movie Awards. The ceremony is going to be cooler than ever in 2016 because Dwayne Johnson and Kevin Hart are hosting the MTV Movie Awards. If ever there was a time to be excited, that time is now. You want energy? These guys have it. You want laughs? Hart is your man. Action? That's Johnson's specialty. They also have a summer blockbuster to plug thanks to Central Intelligence, so you can bet on Johnson and Hart bringing their A-game when it comes time to announce Best Movie Kiss.

This is a big year for the MTV Movie Awards since it marks 25 years of the network serving up quirky awards and crazy award show moments. According to Variety, the 2016 ceremony will break awards show ground by having the show take place on multiple stages across the Warner Bros. back lot instead of on one central stage. "We want to do a big, brave thing to celebrate movies,” executive producer Casey Patterson told Variety. "We love Kevin and Dwayne for doing big, risky, bold things. Most award shows play it safe. They’re the right guys to take big swings."

What kind of big swings can you expect from Johnson and Hart? Let's take a look at their larger than life personalities and careers to find out.

Johnson is a former WWE star, so the man knows how to play a crowd. He is the complete opposite of shy and has no problems being silly if it means keeping his fans happy (did you see his Lip Sync Battle performance?). As for Hart, the stand up comic is even more adept at hamming it up on stage. He even has prior hosting experience thanks to the 2011 BET Awards and the 2012 MTV Movie Awards.

These guys don't need a script. They've both hosted Saturday Night Live and have spent most of their careers working in front of crowds. They could say or do anything at any time, so expect the show to be even crazier than usual.

3. A Large Side Of Action

The MTV Movie Awards is one place where action movies can get some much deserved respect. Johnson has become a huge action star thanks to the Fast & Furious franchise, San Andres, and basically every other movie he has starred in. Johnson's stunt work is epic, and, if the MTV Movie Awards want to go big, they will find a way to utilize Johnson's gift for action.

4. Jokes That Push The Limit

Hart's humor can be self-deprecating, but he can also land an epic burn when he feels like it. This is the man who hosted the Justin Bieber roast, after all.

I cannot think of two actors who are more engaged with their fans. Both Hart and Johnson have a huge online presence where they make a point to interact with their fanbases. Johnson took things even farther when he earned his way into the Guinness Book of World Records for taking the most selfies in three minutes, a task he accomplished by posing for photos with his fans.

6. A Sneak Peek At The Guys' Chemistry

Hart and Johnson are teaming up for Central Intelligence in theaters June 2016, and they definitely have an odd couple vibe on the surface. You can expect the guys to put some serious energy into selling you on their chemistry during the event, no matter how spread out the show is.

While they may seem like an unconventional team, Hart and Johnson have the energy and positive vibes a relaxed awards show like the MTV Movie Awards needs. These guys are going to rock it, pun mostly intended.