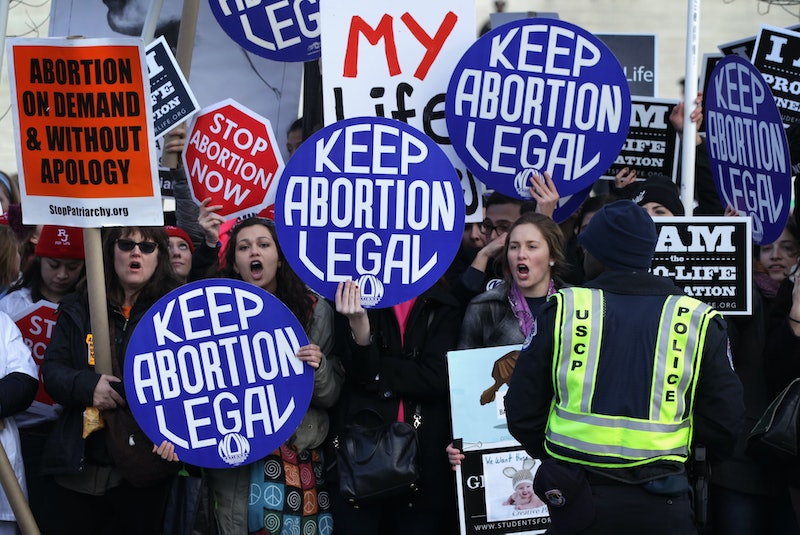 When you're a pro-choice advocate in the midst of the decades-long battle to overcomes the numerous post-Roe v. Wade reproductive restrictions, sometimes you need to give those seeking to quash abortion access a taste of their own medicine — or, actually, take it away, if it's a medicine as sacrosanct as Viagra. That was the strategy for Mary Lou Marzian, perhaps the most creative pro-choice legislator to date. With more than two decades of serving in Kentucky's House of Representatives and watching her colleagues (mostly but far from universally Republican) chip away at abortion and contraception access for the women of her home state, Marzian took a stand and decided to see how the advocates of the pro-life — or, as she and many others refer to it, the anti-choice — movement felt when the sex lives of men, not women, were the subject of government interference.

Days after Republican Gov. Matt Bevin signed an anti-choice bill into law, forcing Kentucky women to undergo counseling and wait a designated period (generally 24 hours) before receiving an abortion, Marzian felt she needed to take drastic action: go after their precious prescriptions for Viagra, Cialis, Levitra, and the like. "I am tired of men dictating to women what our personal, private decisions are. I'm going to have a bill that says what they have to do, and I have to hit them where they would have to wake up," Marzian tells Bustle. "Men are so concerned with their ability to have sexual intercourse, so I knew that would get their attention. That's why I targeted erectile dysfunction medicine."

Within days, the bill became known far beyond Frankfort, Kentucky. It's not surprising that Marzian and her bill earned widespread attention — rarely is legislation so simultaneously funny and strategic, adeptly revealing the hypocrisy of the anti-choice movement on the national stage. But many in the pro-choice movement questioned whether Marzian's bill would be more than a biting legislative stunt. After all, as many point out, there's little to no chance the bill would actually pass.

"I think the pro-choice movement has felt that war is over, that we've got access to safe, legal access to abortions. It's always easier to fight against something. It's harder to rev up people when we have that right," Marzian explains. "I really think this is waking people up to the precipice we're on to losing safe legal abortions."

Marzian can offer firsthand testimony to the struggles and tragedies women and men face when abortions are not available. Marzian is a registered nurse who practiced for 38 years, beginning her studies before abortion was legal.

When I was in training — and this was before Roe v. Wade decision, so abortion was illegal in Kentucky — women would come into the emergency room having self-aborted, bleeding and often infected. And sometimes, they would die.

Her experiences as a nurse motivated Marzian to become involved in the National Organization for Women (NOW) and work on political campaigns, before deciding to run for office herself and getting elected to the Kentucky House of Representatives in 1994. I ask Marzian how the reproductive rights for women have fared since she started serving. "It has gotten way, way worse," she says, noting that the number of abortion clinics in her state have been reduced and they tend to be in urban areas, meaning a woman "may drive four hours for a safe, legal abortion," she says.

Even though some form of abortion access has remained legal, Marzian has seen the high logistical and emotional hurdles that women and their partners must go through in her state. She recalls working as a clinic escort, a volunteer who guides a woman to an abortion clinic and helps shield them from protesters.

This couple from far eastern Kentucky, which is about six hours away, drove up in a truck that was back-firing and smoking. They had three, little towheaded children in the flatbed of the truck. They pulled up, and I said, "I'm here to help you get in. Whatever you decide, it's up to you." They [the protesters] were screaming at her, and she said, "We have three babies that we can't feed, and we don't have any money." And they were yelling at her that she was a murderer.

"My heart went out to her because who are we to judge?" Marzian says. She also points out the further difficulties that couple would have faced today under Kentucky's new abortion restrictions. "There were three little babies in that car already. If you have a 24-hour wait period, they would have had to come the day before. Where do you think they would have been sleeping? In the car."

What is especially frustrating to Marzian in all of this is the hypocrisy she sees in those who heap crippling restrictions on women's reproductive rights — and yet still call themselves pro-life. "They're not really pro-life. They vote against bicycle helmets for children. They vote against increasing foster care allotment for people to get foster children," Marzian says. "They're only pro-life as long as you're a fetus."

Marzian is passionate, eloquent, and charismatic during our interview. One could see her winning the hearts of voters outside of Kentucky, and I wonder if she may try to do that. Just as Wendy Davis skyrocketed from largely-unknown Texas politician to national pro-choice hero after she filibustered on the floor of Texas' senate chamber in June 2013, Marzian is now earning national attention and praise. Like Davis, might consider running for higher office — maybe even the highest office?

Without missing a beat, Marzian says the best response she's gotten is "that I should run for president."

When I ask her if she sees herself running for higher office, she is dubious. "I haven't decided. I doubt it. I just want to continue to be a voice for women, for men who value their private medical decisions. For people who need access to health care. For people who don't have a voice," she says.

And Marzian has some Kentucky constituents she especially wants to protect. "I want my granddaughter and daughter to have access to safe, legal reproductive care," Marzian says.

That is by no means a certainty, or even the reality, for many Americans in 2016. Just last week, Gov. Bevin sued Planned Parenthood, claiming its Louisville facility was providing abortions without a license. While anti-choice legislators often claim they have women's safety at heart in creating these onerous restrictions for abortion providers to secure licenses, Marzian sees their efforts as blatantly sexist and even misogynistic.