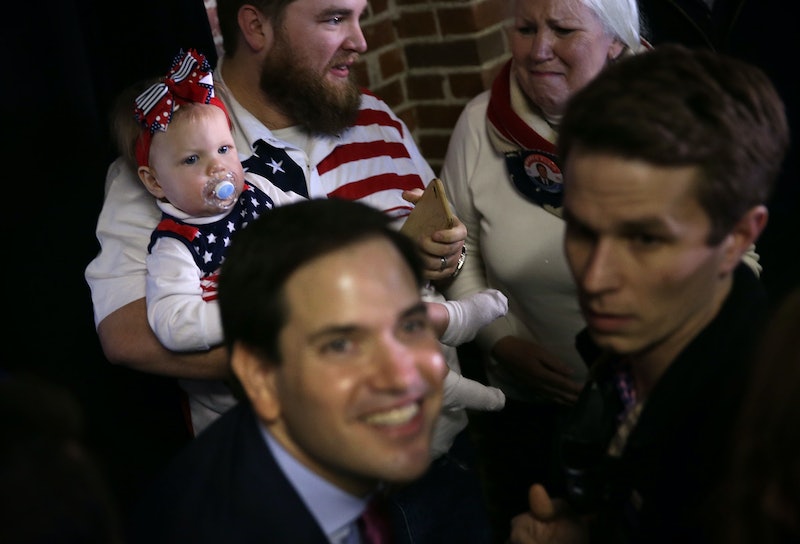 Donald Trump has been the clear favorite to win the South Carolina GOP primary for almost six months straight, but is that about to change? A new poll is out showing Marco Rubio leapfrogging Ted Cruz for second place in the state and coming within three points of besting The Donald. Can Marco Rubio win South Carolina, and what happens if he does?

Sure, Rubio can win... but he probably won’t. While his team must have been delighted to see Thursday’s Opinion Savvy poll, which gave the Floridian 24 percent in the state to Trump’s 27, it’s probably an outlier. Aside from that one survey, the last five polls in South Carolina have shown Trump defeating everyone by double digits. In fact, Trump has been leading the South Carolina polls by double digits consistently since July. Rubio, meanwhile, hasn’t placed first in a single poll in the state, and FiveThirtyEight still gives him just an 11 percent chance of winning South Carolina.

This isn’t to suggest that the race isn’t tight, though. Cruz and Rubio have been jockeying for second place in the state for quite some time, and while Cruz usually comes out ahead, his lead over Rubio is neither consistent nor terribly big.

This matters primarily to Rubio. Ever since this primary started, there’s been a widespread belief in the media that he has a legitimate shot at winning the Republican nomination. However, that perception has never been backed up by either polling, which hasn’t shown Rubio coming anywhere close to besting Trump, nor actual voters, who delivered Rubio third-place and fifth-place finishes in Iowa and New Hampshire, respectively.

According to multiple reports, Team Rubio had a plan not long ago that it called “3-2-1.” The idea was that he’d come in third place in Iowa, second place in New Hampshire, and first place in South Carolina, thus creating momentum and propelling him to the nomination.

Those hopes were obliterated, of course, when Rubio came in fifth place in New Hampshire. A second-place finish in South Carolina would not completely turn things around for Rubio, and he’d still have an uphill climb to the nomination. But if he comes in third, that would confirm beyond any doubt that voters simply don’t like Rubio as much as Republican elites wish that they did.

That said, Rubio does apparently have a backup plan: a contested convention. According to his campaign manager, Rubio’s team is actively preparing strategies to snatch the nomination at the convention without the candidate having won enough delegates in the primaries. As MSNBC’s Steve Bennan put it, Rubio’s plan is essentially “lose primaries, win nomination.” It sounds like an absurd strategy — and yet the 2016 cycle has been nothing if not absurd.