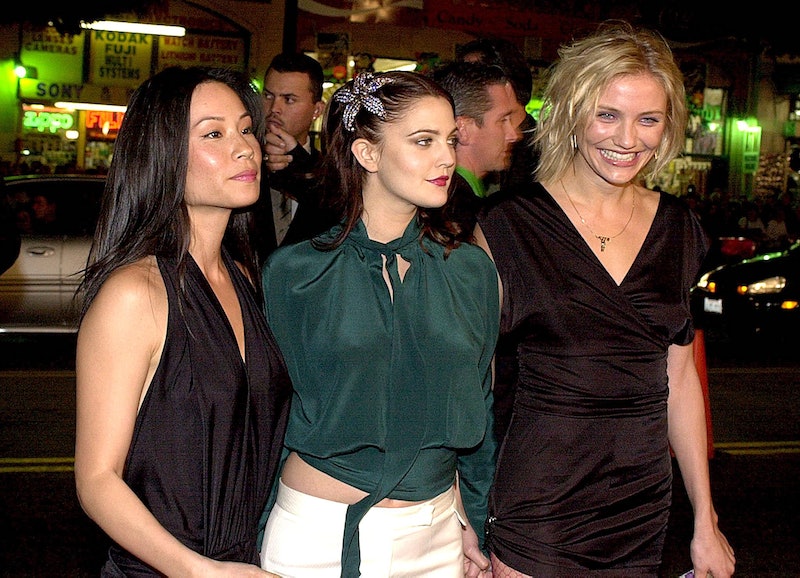 In the 2000s there were some fashion trends we all must have known were a little odd, and yet we loved them anyway. The first thing to know about style back then is that it was kind of confusing but also really awesome in a DGAF sort of way. Although the '90s have been making a huge resurgence lately, we can't forget the looks that many of us Millennials grew up rocking.

Let's take a moment to transport ourselves back to the early '00s. Pageboy caps and skinny scarves were the hot accessories. Everything was a lot more casual and a lot more, well, extreme back then. Body glitter was not a phrase whispered in hushed tones while watching the Grammy's. Every CW heartthrob owned one of those brown corduroy jackets lined with fleece. Puka shell necklaces somehow made their way over to the East Coast. Colors were bright, and graphic tees were total award show material. Drew Barrymore and Adam Sandler were in every single rom-com together.

I was totally guilty of wearing platform flip flops, huge bellbottoms, and body glitter galore. I thought that fingerless gloves were the bees knees. I should've known that I would be terrified looking back at all the underliner. Fashion in 2016 is a major departure from early 2000s style. However, I know that I never once felt bad wearing my pageboy cap and icy lip glosses back in the day. Here is a look back at some pretty wild trends that we totally adored in the early '00s.

Just look at the weird disk on top of early '00s Britney's head!

Wowza these bell bottoms are early '00s-tastic. The embroidery is so Lizzie Mcguire.

I owned a pair of platform flip flops that were hot pink with beading and fake flowers that I used to wear with a blue paisley skirt. This was the "it" summer shoe style circa 2005.

Everyone from celebs to your middle school crush wore trucker hats in the good 'ole days.

These were a little too sexy for my mother, but I envied the girls who wore them with Converse and jean minis.

Bucket hats were all the rage. Pitbull thought so too, clearly.

I had a skinny scarf that went with everything in every season. It was amazing.

Tube tops were the ultimate party girl attire, which is probably why I was never allowed to get one.

Imagine wearing that all jean dress? I'm afraid only Britney Spears could pull that off.

Who cares if it was summer? My skull fingerless gloves were the raddest all. year. round.

More like this
Phoebe Dynevor Serves ‘Bridgerton’ Underboob In Stunning Floral Gown
By El Hunt
J.Lo's Micro-French Manicure Has A Fun, Sparkly Twist
By Olivia Rose Rushing
9 Must-Know Tattoo Trends For Spring 2023
By Carolyn Steber
Sephora’s First IRL Store In The UK Is *Finally* Confirmed
By Justine Knight
Get Even More From Bustle — Sign Up For The Newsletter
From hair trends to relationship advice, our daily newsletter has everything you need to sound like a person who’s on TikTok, even if you aren’t.