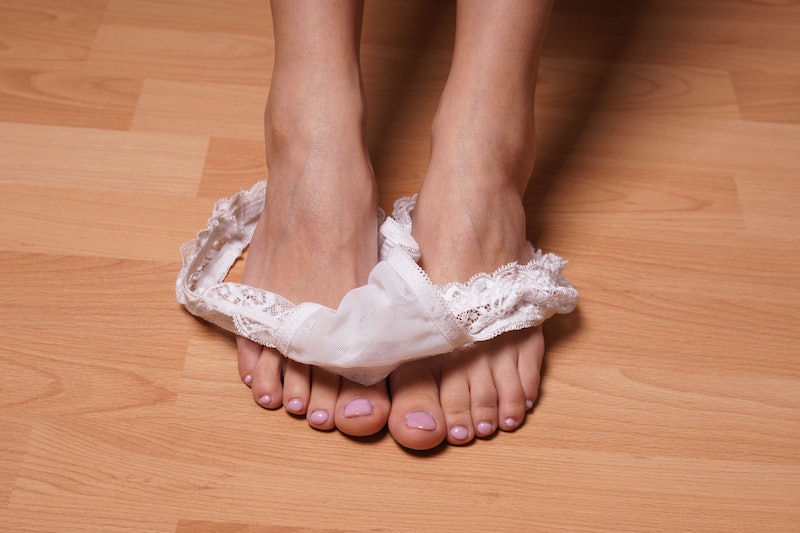 Every so often, generally around awards season, the phenomenon of women "going commando," or sans underpants, becomes a frenzied topic of conversation (usually because some svelte celebrity or other shows up and admits they can't wear underwear under their Dior). For us lesser mortals who aren't required to forgo underwear to fit into couture, however, the decision seems less clear-cut. Are there health risks or benefits associated with going commando? Are we all in danger of catching diseases by having our vulvas run loose like free-range chickens?

The answer is, as with most questions of this kind, a mixed bag. While there's distinct scientific evidence about male underwear and its impact on sperm count and fertility, because female reproductive organs are inside rather than outside the body, we're safe from any panty-related fertility problems. However, when it comes to the complex matters of skin irritation, potential UTIs, fissures, vaginal secretions, and other wonders of vaginal underwear choices, it becomes clear that the choice to toss one's panties into the drawer for the day is a more interesting one than it may appear.

Here are seven potential impacts on your body that stem from the decision to go commando. (No, none of them include "the clitoris falling off" or "my vagina freezing to death".)

1. You'll Be Less At Risk Of Getting A UTI Or Yeast Infection

This is one of the main motivations behind the choice of some women to go commando daily rather than just at night. Urinary tract infections can be caused by the spread of bacteria from the rectum to the tract via the fabric of underwear, while yeast infections are known to be easily incubated in moist environments, including undies. Both are motivations for the common medical advice not to wear underwear of any kind at night, but for some women, particularly those prone to either infection, this acts as a justification for no underwear whatsoever.

The skin of the vaginal area is exceptionally sensitive, though in some women it's more prone to feeling uncomfortable than in others, and the choice to go commando may be motivated by the wish to have fewer potential irritants (laundry detergents, fabrics or body moisture) held close to the skin by underwear.

This is a conditional one, however, based on what you wear instead of underwear. If your underwear is being replaced by the crotch of a pair of jeans or anything else that's moving across the vulva without protection, it may cause more irritation than it solves. (If you are going to go commando, go with something with a crotch portion inserted rather than a seam, a loose skirt, sweatpants, or harem pants. Spandex and non-breathable fabrics aren't recommended for anything more than a short period.)

3. You May Notice Secretions On Your Clothing

Normal vaginal secretions are nothing to be concerned about; every adult woman with a healthy, functioning set of genitals will produce a certain amount of discharge, usually of a creamy-white color and slightly thick consistency. There's no sign that going commando prompts any shift in this discharge (if you do notice anything, go to your GP, as it's being caused by something else), but the choice not to wear underwear does mean that it has no place to be collected, and may end up elsewhere on your clothing.

4. Chafing May Become A Concern

Again, this is a health concern that will be prompted by what you choose to wear without the barrier of underwear to protect you, and what activities you're doing. Chafing is the skin irritation and damage caused by friction, either by skin-on-skin contact or by skin encountering other substances. Underwear acts as a preventative measure for chafing against delicate genital and rectal skin, so be careful what you're choosing to wear: no inseams or unbreathable fabrics up against the unprotected underparts, please. Spacious cuts and skirts are preferred.

5. You'll Run The Risk Of Micro-Cuts If You're Working Out

Micro-cuts, otherwise known as vaginal fissures, are just as fun as they sound, and doing repetitive workouts in improper gear without underwear seems to raise your risk of them. Fissures, which can be caused by stretching or irritating the vaginal skin, heal quickly most of the time, but they're painful when they're around and can become infected and just generally kind of suck. It's necessary to do your research about your cardio workout and particular choice of workout gear (remember, spandex is not particularly breathable, either) before making a choice as to underwear or no underwear.

6. It Will Be Easier To Catch Certain Infections If There's No Clothing In The Way

Look, it's very, very rare for crabs to leap from a toilet seat to a human, for the good reason that crabs can't survive for very long outside of a warm human environment. So commando times are likely not going to get you pubic lice.

But it's undeniable that if you choose to be unhygienic about your commando activities and sit or rest on surfaces without any fabric in between, there's a higher risk of foreign bacteria coming into contact with your skin. If sans-underwear is your choice for the day, always make sure you have at least one layer of protection between yourself and other surfaces, whether it's the bus seat or just your own couch. (Yes, the couch may betray you.)

7. You Might Experience Changes In Libido, But Not In Temperature Or Allergies

A lot of people who strongly advocate the values of commando life talk about its psychological benefits: feeling "sexier" or "more free". While this may be true, no psychological studies have been done on whether any boost in libido or self-confidence is a widespread effect on women's bodies when sans underwear, so don't count on it happening.

Similarly, your vulva will not "catch cold" when exposed to the wind or air, and if you have a pollen allergy you won't get a reaction in your exposed vulva to hayfever-inducing spring air (pollen vulvitis, as it's called, is only found in very small children). You'll be good, guys, there's no need to muffle your muff.