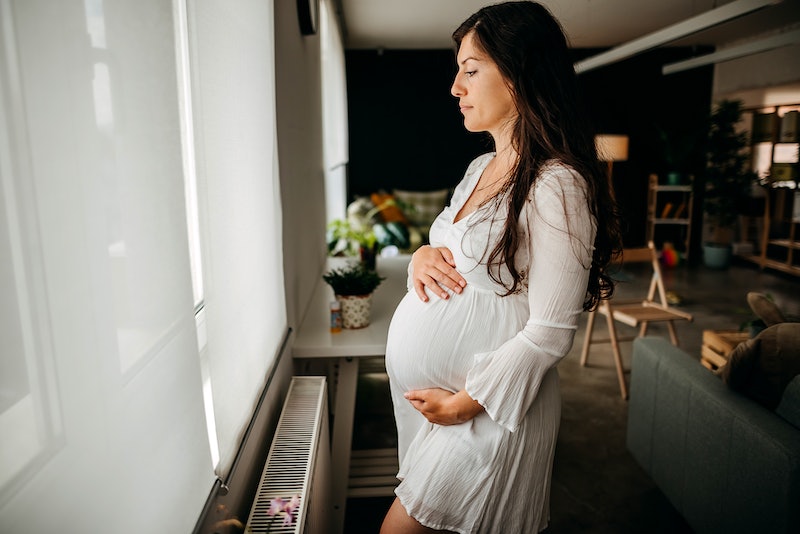 To the uninformed, it may seem like being pregnant is the simplest thing in the world. We've got the womb, the uterus, the whole deal: it should be easy as pie, biologically, right? Well, unfortunately, it's not. Being pregnant can be a much more complicated experience than it initially appears to be, not only because of scary and rare occurrences like preeclampsia or hyperemesis gravidarum (or "Duchess Kate's disease," after the long-suffering British royal), but also due to common, lesser-known side effects. A bun in the oven ain't a walk in the park, and if you're contemplating getting pregnant, there are health aspects to the process that you may not have clocked yet.

We all have a reasonable base of knowledge about pregnancy and the long-term consequences that the actions we take while pregnant can have on our child. We know that smoking and drug use while pregnant are bad; we know that gaining a large amount of weight during pregnancy can increase the odds of complications; and we're also now discovering that stress and anxiety in a pregnant woman can impact the baby as well.

But we know much less about the long-term impact that pregnancy can have on our bodies. Few of us know that the time of life you decide to have a baby affects your cancer risks. Or why you should prepare for a pregnancy's potential to seriously mess up your vision, your body's blood clots or your ability to cope with glucose levels. The cheerful concept of pregnancy as a time of glowing skin, inexplicable cravings and swollen feet isn't the entire story; pregnancy-related health consequences of varying kinds also need to be taken into account before you make the decision to bring a happy little Junior into the world.

That's not to say pregnancy isn't wonderful, and that you won't have a lovely time singing tunes to your bub as it floats about in your womb. (In a very cute bit of science, a study has discovered that premature babies in incubators pay more attention if they're played recordings of their mother's voices singing or talking to them.) But ignoring the possible health issues won't make you any happier (or healthier). So let's examine five common health consequences of pregnancy.

1. Your Vision May Change During Pregnancy

As the body develops and hormone levels change in pregnancy, it can have consequences for your eyes and vision. One common side effect? The cornea swelling or slightly changing shape, which is due to fluid retention caused by hormonal shifts.

Parenting magazine reports that this change can have several different consequences. One is that a swelled cornea refracts images in different ways, producing potentially distorted vision. Another is that contact lenses may become very uncomfortable. Hormonal shifts may also increase the likelihood of dry eye syndrome, where the eye is less capable of producing its normal "tear film" to lubricate itself.

Luckily, this host of eye conditions seems to settle back to normal once pregnancy itself is over and hormone levels have adjusted, but it's worth making optometrist appointments throughout your pregnancy to monitor your vision, particularly if you have pre-existing vision difficulties.

2. Gestational Diabetes Is More Common Than You Think

It's estimated that, in first world countries, about 18 percent of all pregnant women will develop gestational diabetes of some sort. And while gestational diabetes is serious, it's more treatable than you may think. Diabetes of any kind is a condition where the body doesn't produce enough insulin to regulate its own blood sugar, leading to severe sugar spikes. Gestational diabetes is a kind of diabetes that develops in people who did not have diabetes prior to becoming pregnant, and occurs because of an interaction between hormones and insulin production. The higher levels of cortisol, estrogen and human placental lactogen churned out during the later state of pregnancy actually make you less sensitive to insulin, so you have to produce more. And if your body can't keep up, gestational diabetes ensues.

Women diagnosed with gestational diabetes are generally closely monitored by doctors and given very prescribed diets. They may also have to be dosed with insulin, and advised to give birth at a hospital rather than at home. If it's not treated properly, gestational diabetes can have serious implications for both the pregnant woman and child, including the baby being born large or prematurely, or having its own blood sugar issues after birth.

3. Pregnancy May Reduce Your Chance Of Developing Breast Cancer

There seems to be a relationship between having been pregnant and having a lower risk of breast cancer. Why? Because pregnancy reduces the amount of time a woman is exposed to particular hormones that are tied closely to breast cancer. As the National Cancer Institute explains:

Studies have shown that a woman’s risk of developing breast cancer is related to her exposure to hormones that are produced by her ovaries (endogenous estrogen and progesterone). Reproductive factors that increase the duration and/or levels of exposure to ovarian hormones, which stimulate cell growth, have been associated with an increase in breast cancer risk. These factors include early onset of menstruation, late onset of menopause, later age at first pregnancy, and never having given birth.

It seems that pregnancy also makes breast cells mature in a certain way that may make them less likely to develop cancer, according to the Breast Cancer Organizaton. It's particularly powerful in young women: having a pregnancy by the age of 20 reduces your risk of developing breast cancer by half (though, of course, this should definitely not be your only consideration when deciding when to get pregnant).

4. Giving Birth Later Might Lower Your Risk Of Ovarian Cancer

A study released in 2015 found something interesting: women who gave birth for the first time later in life were less likely to develop ovarian cancer than women who had first given birth at a young age. A survey of over 4,000 Los Angeles women — some with ovarian cancer and some without — found that for every five years you wait to have your first child, your likelihood of developing ovarian cancer dropped by 16 percent. Why? The scientists behind the study thought it was possible that the ovaries of older women were more damaged from years and years of menstruation (yep, periods leave ovarian scars), and that a late pregnancy could clear a lot of that damaged tissue out.

But a first pregnancy after 35 raises the risk of breast cancer, and we're only just now beginning to understand why. A 2013 study of the phenomenon found one possible explanation: by the age of 35, your breasts are more likely to have accumulated cells with the potential to blossom into cancer. During later-life pregnancy, it seems that these cells are more likely to "activate" and develop into full-fledged cancer because of an enzyme response.

5. Pregnant And Post-Birth Women Have Higher Risk Of Blood Clots

Pregnant women are 10 times more likely to develop blood clots than non-pregnant women of the same age. Apparently this is caused by a combination of factors: hormones causing slow blood flow, a raised clotting threshold due to high estrogen levels, and possible vein damage as the fetus grows in your abdomen. And serious clots are no fun: if they break free and get into the bloodstream, they can cause horrible havoc when they lodge somewhere.

The risk time for serious clots is within the first trimester and then the first six weeks after giving birth; after that, your risk drops off. Plus, there are steps you can take to ward off the risk, particularly if you have no history of clotting problems. To prevent clots, pregnant women are encouraged to keep moving rather than remaining sedentary, and to wear those really glam, deep vein thrombosis-preventing compression socks. Hey, who said having a healthy pregnancy wasn't also wildly fashionable, right?

More like this
The UK Abortion Laws In 2022, Explained
By Sophie McEvoy
6 Abortion Advocates To Follow On TikTok
By Sara Youngblood Gregory
How To Protect Your Digital Privacy If You Need An Abortion Post-Roe
By Kaitlyn Wylde
The Best Summer Workout Gear Of 2022
By Carolyn Steber
Get Even More From Bustle — Sign Up For The Newsletter