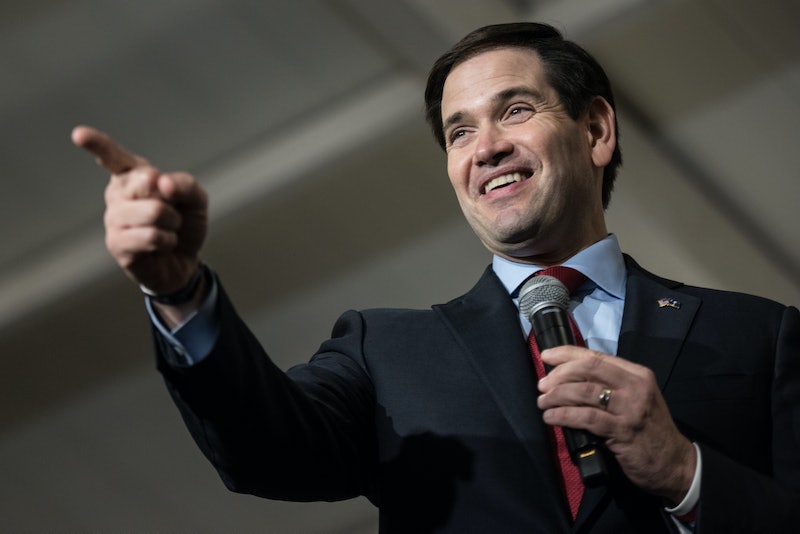 Republican presidential candidate Marco Rubio delivered a triumphant speech in South Carolina after losing the Palmetto State's primary to rival Donald Trump, telling his conservative supporters he'd continue to fight for them. South Carolina's primary saw the Florida freshman senator locked in a heated battle for second place with Texas Sen. Ted Cruz on Saturday. At the time of his speech, with 84 percent of ballots counted, South Carolina's second place finish remained still too close to call although Rubio was reported to be holding a slight lead over Cruz with 22.3 percent of the vote.

For me, the state of South Carolina will always be the place of new beginnings and fresh starts. I know that God’s hand is on everything, and so whatever God’s will is in this election is ultimately what will happen to us and to our country. But if it is God’s will that I serve as our 45th president, if it is God’s will that we win this election, then history will say that on this night in South Carolina that we took the first steps in the beginning of a new American century!

Although Trump was projected to be the big winner of the South Carolina primary, Rubio's performance has his campaign all smiles. For Rubio, the Palmetto State wasn't about finishing first or defeating Trump, who consistently dominated polls ahead of the primary. Instead, Rubio's focus was on retaking the lead he once held over the Republican party's other establishment candidates like Jeb Bush, who announced the end of his presidential bid just prior to Rubio's speech Saturday. Rubio's hope is that he'll be able to garner enough support from Bush's failed campaign — and that of the Carson and Kasich — to defeat Trump and Cruz in the primary race.

The Florida senator struggled to maintain the momentum of his third-place Iowa win going into the New Hampshire primary earlier this month, where he finished behind Trump, John Kasich, Cruz, and Bush. Rubio sought to get his campaign back on track following his major defeat in New Hampshire with key endorsements and a revised strategy aimed more at staying in the race than at taking first place. Indeed, it appears a late endorsement from South Carolina Gov. Nikki Haley benefited Rubio at the polls Saturday, bringing the freshman senator back into the top three.