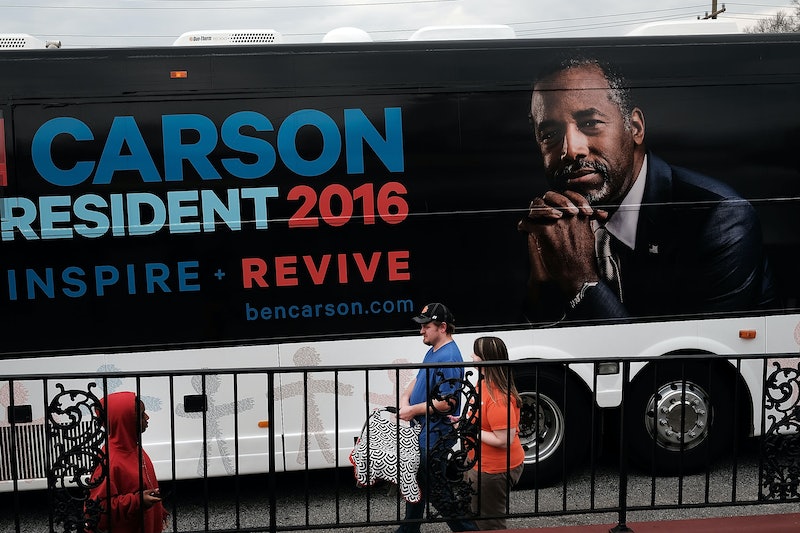 With just 33 percent of votes in the South Carolina primary reported, Ben Carson called it an early night in the Palmetto State. Carson, who trailed behind all of his competition with a meager 6.6 percent of votes at the time of his speech, told his supporters he wasn't going to give a concession speech. Instead, Carson said he would stay in the presidential race.

"There are news people here who think I'm going to make a concession speech. This is a just the beginning speech," Carson said.

In a bizarre speech, the retired neurosurgeon argued he was the true "outsider" of the Republican Party's presidential ballot in an indirect jab at Trump, who was the projected winner of the South Carolina primary. Carson assured supporters he had no intention of throwing in the towel and said he would be taking his message to Nevada, which will hold its Republican caucuses on Tuesday.

"Our nation is very close to going off the cliff and what I am attempting to do as a true outsider…the fact of the matter is what we need is recognition of the fact that the way our country was designed it was designed for citizen statesman, not career politicians," he said.

Carson's speech Saturday took a truly unusual turn when the presidential candidate went on to pontificate about humans' failure to use their frontal lobes. "People are being easily manipulated and told what they are supposed to think and who they are supposed to follow when in fact we have this tremendous brains with these enormous frontal lobes." The retired neurosurgeon said more people needed to "get serious" about thinking for themselves rather than blindly believing what pundits tell them.

But while Carson maybe didn't quite feel it was time for him to end his presidential quest, the media — and his competition — made it clear they certainly did. Carson's speech went largely underreported by most major news networks and Sen. Marco Rubio declared the GOP presidential primary had become a three-way race following news Jeb Bush had ended his campaign. To thwart any confusion, Rubio meant the Republican race was now a contest between himself, Trump, and Ted Cruz.

However, whether Carson wants to admit it or not — and given his speech in South Carolina on Saturday, he clearly doesn't — he's clearly no longer a viable contender for the presidency in the eyes of voters. The only question now is how long he'll drag out his stumbling campaign.