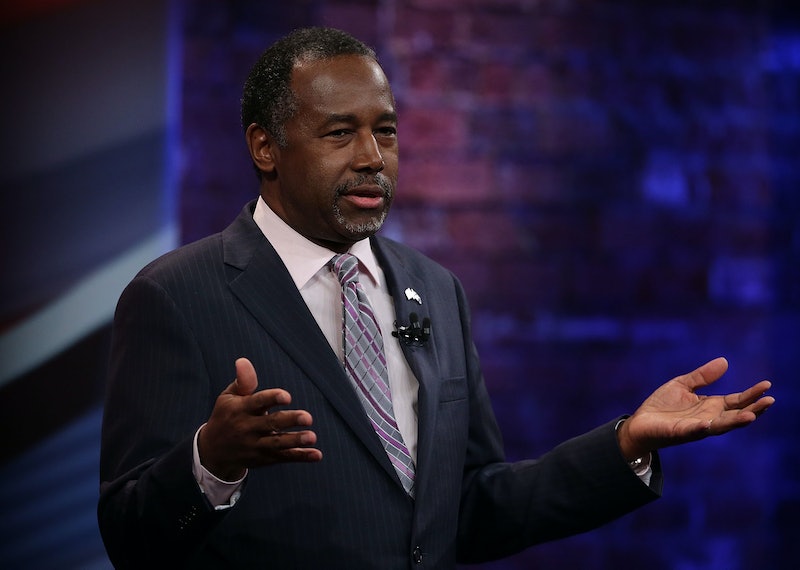 On Saturday night, the South Carolina Republican primary went, well, basically exactly like everyone expected it to ― Donald Trump, who'd been polling in the lead for months, sealed the deal with a double-digit margin of victory, leaving Marco Rubio and Ted Cruz behind in a near-tie for much of the night (although Rubio eked out the second place finish). So, what about the dead-end also-rans? In particular, the one who finished dead last ― will Ben Carson drop out of the race?

It's been a rough road for Carson, especially after his brief flirtation with contender status last year. And now, with the genuine contenders in the field clearly winnowed to just Trump, Rubio, and Cruz, and coming hot on the heels of a sixth-place finish in South Carolina, it's a pretty reasonable question. While John Kasich appears to be staying in after his fifth-place finish, Jeb Bush immediately ended his campaign after the final results rolled in, leaving Carson the last of five candidates, with no evident potential for growth or another surge in the polls up his sleeve.

And yet, and yet. Despite having quite literally every reason to end his candidacy, from the sounds of things, Carson is staying in the saddle for at least one more rodeo. In his speech following the disappointing finish in the Palmetto State, he told his supporters that "this is only the beginning."

For the record, Carson has finished fourth out of 11 in Iowa, eighth out of eight in New Hampshire, and now sixth out of six in South Carolina. While it's open to debate whether Carson actually believed what he said, if he did, it can only be called delusional ― no Republican candidate has ever won the nomination after losing those three races to start And after practically sleepwalking through a staggering nine debates, including some excruciatingly awkward answers (and one excruciatingly flubbed entrance), it's as plain as day: Ben Carson not only can't win, there isn't even a feasible strategy for him to gain ground. His quiver, so to speak, is all out of arrows. The goose is cooked. The cake is baked.

Which is why it's probably causing a bit of teeth-gnashing around the RNC that he seems determined to stay in the race, through Nevada at least. According to reporter Jamie Dupree, not only did Carson seem to talk up his potential following the last-place finish, he also released a full slate of campaign events clear through the Nevada caucuses on Tuesday. Obviously, he's not exactly blowing the doors off with his levels of support ― he finished at just 7.2 percent on Saturday night ― but even that meager share of support could be put to much better use somewhere else, if the party is to have any hope of avoiding presidential nominee Donald Trump.