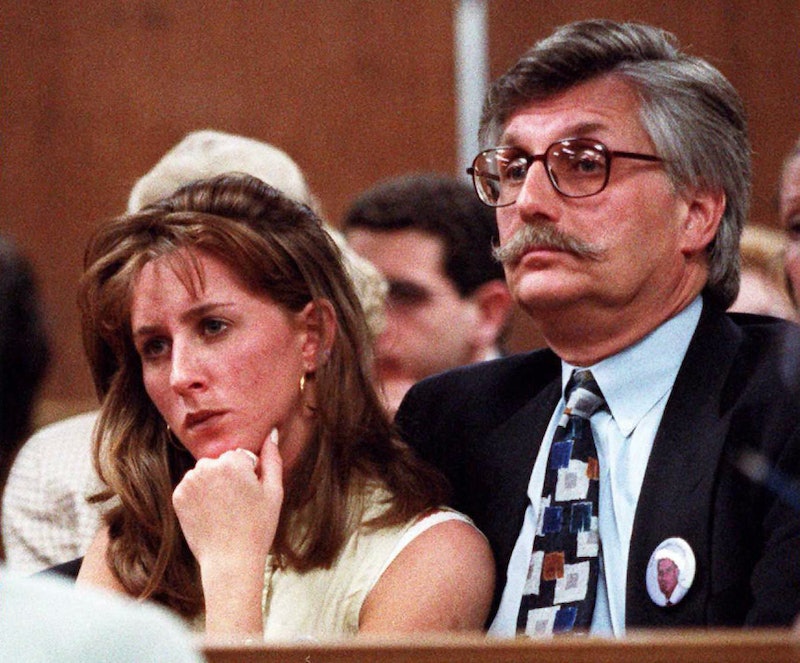 When Nicole Brown Simpson and Ronald Goldman were stabbed to death on June 12, 1994, the world took a collective gasp — they were not only shocked that such a crime could happen in the hills of Brentwood, California, but also that O.J. Simpson, the famed football star-turned-actor, was a suspect in their deaths. Simpson was found not guilty of the murders, but his trial became the television event of the decade, and The People v. O.J. Simpson: American Crime Story is so far doing the story justice. Nearly everyone involved in the original events have spoken about the series, but what does Goldman’s family think about American Crime Story ?

"I am disappointed that this new show overlooks the victims," Goldman's father Fred tells Bustle in a statement via email. "Ron and Nicole were nothing more than dead bodies and as a father, that is deeply disturbing. I hope people remember that two people brutally lost their lives. We were able to publish the book "His Name is Ron" in his memory, and to encourage all families of horrific crimes to tell the story of their loved one."

Though American Crime Story begins with the aftermath of their murders, according to the New York Times, Goldman and Brown Simpson were friends and on June 12, Goldman had agreed to bring by glasses that Brown Simpson's mother had left at the restaurant where he worked. As also reported in theNew York Times, it’s believed that Goldman arrived during the attack on Brown Simpson, and, trying to protect her, was killed by her attacker. Goldman's sister Kim told The Daily Mail that American Crime Story hadn't consulted her family about the show, and she tells Bustle via email that it has been a difficult time for her.

"I had the honor of interviewing families who lost loved ones and had the added pressure of living their private tragedy in the public eye -the high profile stories featured in my book Media Circus talk about how hard it is to live in a fish bowl and the difficulty of your story continually played over and over again in the news," she says. "This new series on FX is a prime example of how constant it is. It never ends and victims and survivors are always needing to adjust their healing - this show puts me right back in that space."

I understand how painful it must be for the Goldmans to go through all of this again. They had to live through the actual event, then the trial, and now American Crime Story is rehashing all of those painful memories. I also see it from the sides of the producers of the show. The book American Crime Story is based on, The Run of His Life by Jeffrey Toobin, didn’t focus as much on the victims as it did on the trial, for better or for worse. Hopefully, when the season focusing on Simpson's trial ends its run and takes them out of the spotlight, the Goldman family can begin to heal once again.