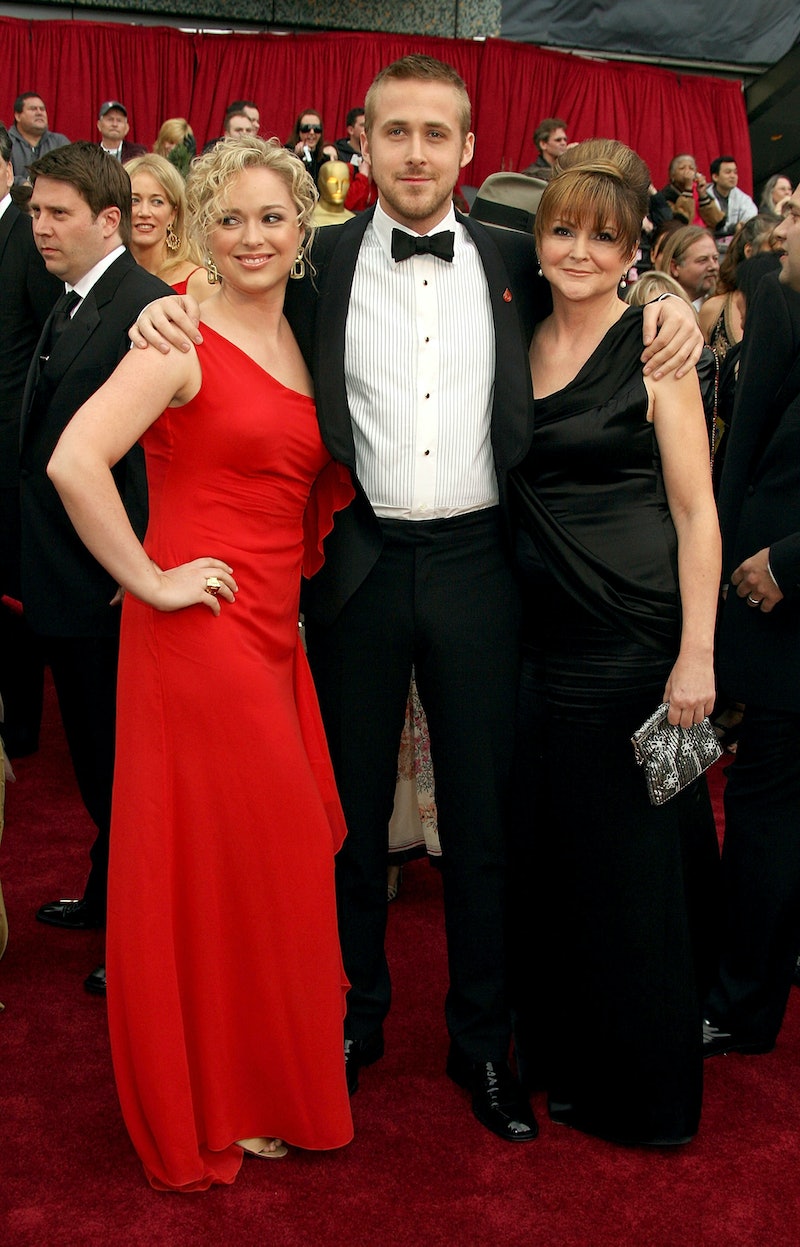 The Oscars are a big deal, whether you're nominated or not. Not only will the celebs be rubbing elbows with some of the biggest actors of all time (and quite possibly a few of their own heroes), but everyone back at home will usually be watching what they say, what they wear, and who they bring. That's why Ryan Gosling's first Oscars red carpet was particularly adorable. The dates he took to the event will make you want to say "aww" out loud. Gosling was accompanied by his mom, Donna, and sister, Mandi, to the 2007 Oscars. His two leading ladies cheered him on as he was nominated for Best Actor for his role in Half Nelson.

Gosling wasn't the first person to bring his family along to the red carpet, though. Matt Damon and Ben Affleck arguably started the trend when they took their mamas to the 1998 Oscars where Good Will Hunting took the prize for Best Original Screenplay. But Gosling's moment was extra sweet because he made it a full-on family affair — and good thinking, too. Can you imagine how bummed out you would be if your brother whisked away only your mom to the Academy Awards red carpet? ELLE reported that Gosling said, "I feel like I think like a woman, because I grew up with my mother and my sister so I've just been programmed to think like a girl." Perhaps he understood the emotional roller-coaster his sister might encounter if she was left behind. That's a good man.

When asked about his date choice, his explanation for bringing along his mother was the sweetest. According to ELLE, Donna was a single mom who both raised and home schooled him, and he wanted to show her how much he appreciated everything she did for him.

And apparently he wasn't the easiest kid to raise. According to ELLE, Gosling told Nightline, "I was a little jerk, but she didn't care. She just kept doing the right thing by me, every single time. She deserves to a fancy party and have a bunch of fancy people tell her she did a good job."

So how did the night go for the family? Well, Gosling lost the Best Actor title to Forest Whitaker for his role in The Last King Of Scotland, but that didn't put a damper on things per se. According to Entertainment Weekly, his mom had quite the moment. "Gosling started off with a story about how his beehive-wearing mother was miserable at the Oscars because her hairdresser had falsely predicted that would be the look — until he explained the situation to stranger Meryl Streep, who then leaned over and said, 'You know, I almost wore my hair up, too. I’m so jealous, I wish I had.'"

Um, any night that ends with Streep complimenting you is a solid one. So I guess Donna has her son to thank for that one!