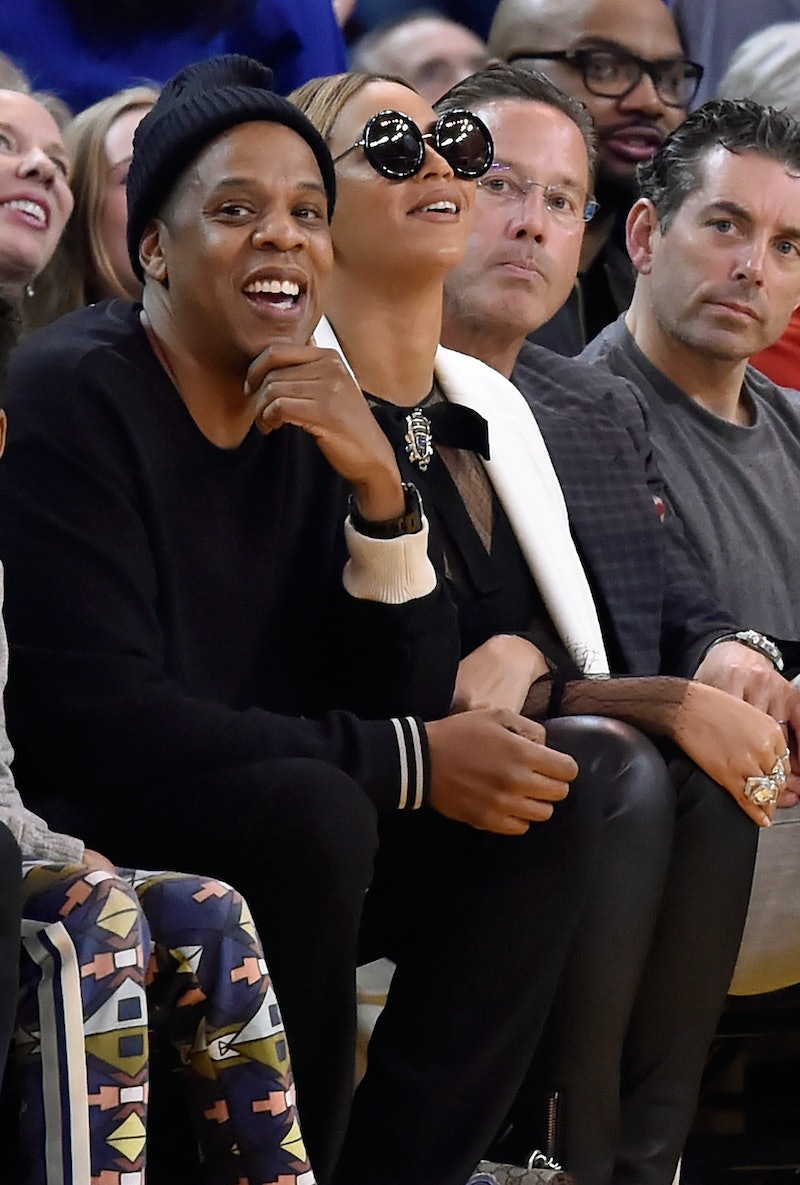 Beyoncé and Jay Z don't appear in public all too often, as they are not the kind of celebrities to constantly show up at late-night talkshows or party at clubs. But one place you can practically guarantee that you're going to see Jay Z and Beyoncé at is an NBA game, as the two often attend those events looking adorable and very stylish. Just look at this most recent picture of Jay Z and Beyoncé at a Clippers game — not only are they super cuddly and engaged in this photo (even with Kendrick Lamar third-wheeling), but Bey's shoes are amazing. No surprise there.

If you think you've seen this picture before, it's probably because there are loads like it of the stars sitting courtside, mostly at NBA games but sometimes at other sporting events. While even Beyoncé's deepest enthusiasm and disappointment typically comes across beautiful and polished, Jay Z is hilariously present with his expressions, making a good contrast to Bey's composure. In case you forgot, Jay once owned part of the Brooklyn Nets and continues to be an avid fan of the sport. So taking into account their outfits (including any coordination that may or may not have been pre-meditated), physical chemistry, other guests, and expressions, here is a definitive ranking of 14 pictures of Beyoncé and Jay Z sporting events.

Not my favorite Beyoncé look — I don't know what's going on with her sweater thing.

13. At A Soccer Game In France

Why so serious? You're Jay Z and Beyoncé! Actually this picture is kind of cute because they seem so focused; perhaps they're trying to remember all the French phrases they know or the rules of "football."

Images from this game led some to wildly speculate about divorce, and it's true the couple doesn't look super happy. However, this is some of my favorite Beyoncé hair ever.

Jay's all like, "Hey! It's us, your old married friends!"

I don't love their outfits here, but I do love the relatable concern on Jay Z's face as he covertly looks at Bey's phone. Celebrities — they're just as insecure in their relationships as the rest of us. Am I projecting?

Do you think that Beyoncé called up those around her to figure out a color palette? She's dressed like how Jay Z usually dresses, which is a nice change, but not her best courtside look.

They are having so much fun here, which makes up for their kind of blah outfits.

7. At A Warriors/Cavaliers Game At The Oklahoma City Thunderdome

Beyoncé's glasses are fantastic, and they both look goofy, which is a fun change.

6. At An NBA Playoffs Game

I love Beyoncé's explorer look in this one, and it really invites a lot of speculation: what could she and Jake Gyllenhaal possibly be talking about that has so thoroughly left out Jay Z?

Their expressions paired with her very silly hat are perfection.

4. At A Raptors And Nets Game

Imagine how it would feel to make Beyoncé and Jay Z laugh this genuinely. They are both super casual here, but it works.

I love how intimate of a moment this is, and both are perfectly dressed for tennis. I imagine that Jay Z is talking to Beyoncé about Tidal, and she's indulging him slightly pitying affection.

A+ for Jay Z's expression, Beyoncé's shoes, and both of their looks overall.

What can I say? Leave it to Beyoncé and Jay Z to make the rest of us care about sports.

More like this
Taylor Swift, Kerry Washington & More Speak Out On Uvalde Mass Shooting
By Jake Viswanath
Are Tom Daley & Louis Theroux Bound For 'Strictly'?
By El Hunt
Marcus Rashford Took Inspo From Kravis For His Adorable Proposal To Girlfriend Lucia Loi
By Frances Stewart
Ryan Reynolds Brought Some Famous Friends To Wrexham A.F.C's Last Game Of The Season
By El Hunt
Get Even More From Bustle — Sign Up For The Newsletter