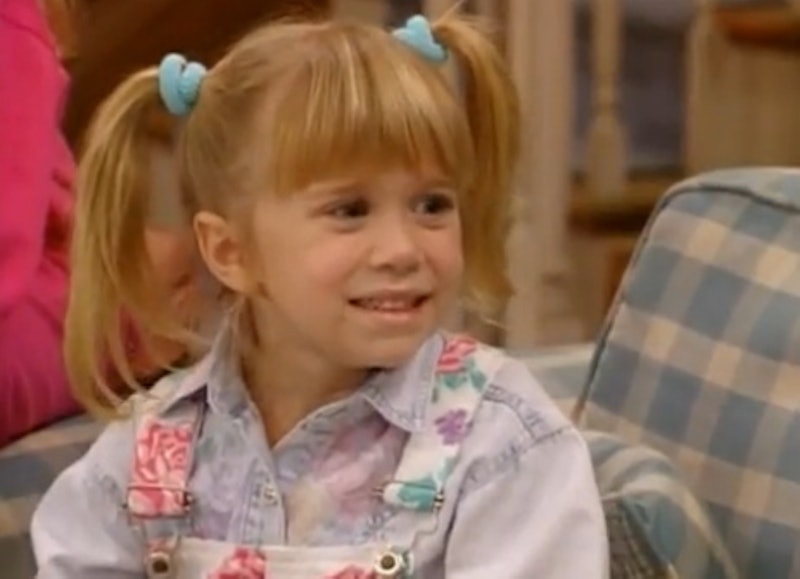 If we can't see the Olsen Twins on Fuller House, we'll all just have to remember Michelle Tanner as a perpetually spunky toddler. Luckily, John Stamos has helped by providing a new Mary-Kate and Ashley Olsen Full House throwback clip. The video, which Stamos posted to his Instagram on Sunday, shows both twins dressed up as Michelle, the role they shared on the '80s sitcom. The twins, who are three at the time, both approach their fictional uncle. While one of them — I can't tell which — goes and gives Stamos a big hug, another goes up and punches him. However, when someone, presumably their mother, scolds her, the offending twin gives an apologetic hug. It should be noted that Stamos is referred to as Jesse, rather than John; I wonder if the young girls knew all their adult costars by their character's names before they knew their real ones.

This video might be a bittersweet moment for Full Housefans, since the twins are some of the only characters who have not returned to the Fuller House reboot show, which is set to premiere on Feb. 26. Both of the actors-turned-fashion-designers revealed that they didn't wish to return to acting, which they had strayed away from since their tween successes. This has been a source of some bitterness for fans, as well as for some cast members, but with Fuller House coming up soon, most people are simply excited to see many of the Tanners return to TV.

Stamos, whose jokes about the twins' refusal to appear on the show have caused some chatter about their relationships, captioned the post with the words "#StamosHomeMovies #Fullerhouse Hawaii '89 Mk/A #GiveHimaHug." In addition to the adorableness and nostalgic pangs the video brings, it's a nice gesture to see that Stamos can still look back fondly on his time with the twins despite their absence from Fuller House. It's a sign that there isn't any real bitterness in their current relationship, which is hugely reassuring. Because while it will be possible to watch Fuller House without some of the Tanners present, knowing that there were feuding Tanners out there would be a little too hard to deal with. Thankfully, this video proves that that's certainly not the case.