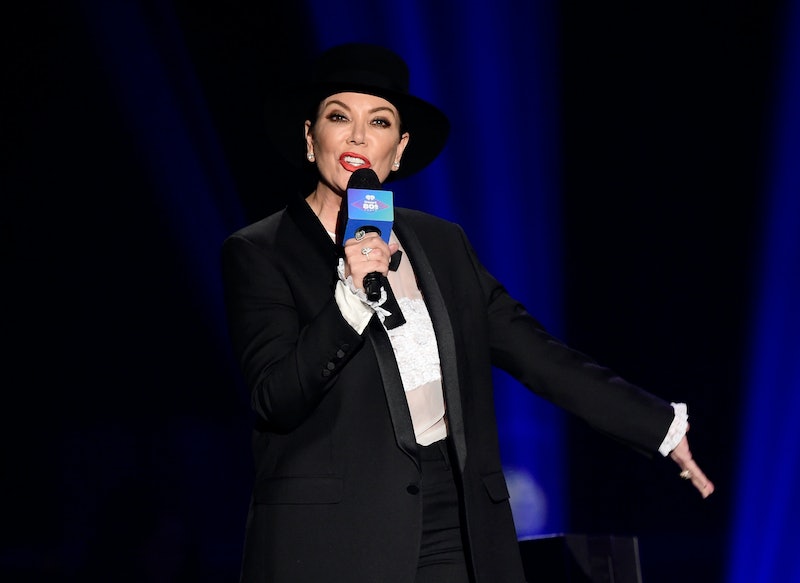 All Kris Jenner was supposed to do was introduce Boy George at the iHeart80s Party in Los Angeles on Saturday night. The audience at The Forum, however, didn't make it easy. Jenner was booed during her introduction, but she held on and kept her composure like a champ. The crowd at the event began booing the Kardashian family matriarch from the moment her name was announced, and it can be clearly heard on a video of the moment. But in the clip, Jenner, dressed in a Boy George-esque top hat and suit, powers on and begins her intro despite the audience reactions, telling the crowd that "from the moment I heard about Boy George back in the ‘80s, I was completely obsessed, not only with his music, but inspired by his amazing fashion and style."

But as the video shows, the audience's dissatisfaction grows louder as Jenner goes on, making it harder for her to speak over the booing. It even causes a DJ from the stage to chime in and try to get the crowd to settle down and let Jenner talk, but sadly, it doesn't seem to work. Yet impressively, the star keeps going, refusing to stop, yell, or fight. She just reads her introduction, not even breaking her cadence, and that's impressive. Being on stage is hard, but being booed is so unnerving. Imagine if you were on that stage and you have one job, but no one is letting you do it and they're booing you. It's enough to make anyone break and yell at them to shut up, but Jenner doesn't. She carries on like the total pro she is.

Jenner even ends her intro with a little "Woo!" which could either mean, "Woo! This is a tough crowd," or "Woo! I actually got through that one." It's not exactly clear why the crowd was booing — do they just hate the Kardashians, or do they have some other reason to criticize Jenner? — but does it really matter? It was pretty rude of them to be a chorus of discontent and drown out a celebrity guest in this small moment of what's supposed to be a fun, '80s flashback concert featuring Rick Springfield, Missing Persons, Loverboy, Billy Idol, and Tears for Fears. But here, Jenner truly shows why she's head of the Kardashian family and such a successful momager.

Watch the video below. Love her or hate her, it's hard not to be impressed by Jenner's response to the negative reaction she received.