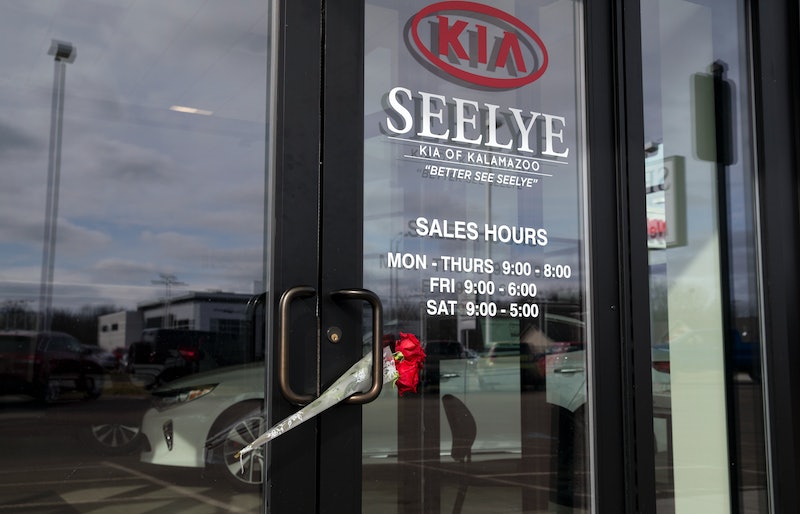 Another senseless shooting claimed the lives of six Americans on Saturday: Richard Smith and Tyler Smith are among the dead in the southwestern Michigan college town of Kalamazoo. As of Sunday evening, a 14-year-old victim remains in the hospital in critical condition. The father and son were at the Seelye Kia on the southwest side of Kalamazoo, going about their business on a Saturday afternoon, when they were gunned down by a lone shooter outside the car dealership on a busy commercial strip in their hometown.

Tyler Smith was an 18-year-old senior at Mattawan High School, a community of just over a thousand students with an award-winning marching band program. Photos from his Facebook profile highlight his obvious love of automobiles; his profile photo features him perched against a late-model Pontiac Solstice convertible on a pier with a scenic waterfront in the background. The teen also played for Kingdom Soccer Club, which tweeted their condolences to Smith's family Sunday.

The Mattawan High School student senior leaves behind an understandably grief-stricken group of friends, classmates, and teammates who have taken to social media to share the hashtag #TylerStrong to remember their classmate and as a show of support to each other.

YouTuber Christian Bolt of The Bolt Review tweeted "a small tribute" to honor his chemistry class lab partner, and express his grief and loss. The high school senior and student-athlete would have been in the middle of the college application process at the untimely moment of his death.

Less is known about Tyler's father, Richard E. Smith, Jr. It isn't clear whether or not the 53-year-old shared his son's love of cars, but the fact that father and son spent their last moments alive together, enjoying a hobby that one of them was clearly passionate about, paints a sweet picture of a supportive, close family. Smith is survived by his wife, Laurie Smith, who was not present during the carnage in Kalamazoo.

The latest gun tragedy in America has made yet another mindless tear in the fabric of our society. The family, friends, teammates, and colleagues of Richard and Tyler Smith are left to pick up the pieces and attempt to go about the days and weeks ahead as best as they are able. While they grieve, however, it is the responsibility of the rest of the country to decide if this will finally be the event that results in a radical reevaluation of the role of guns here at home.