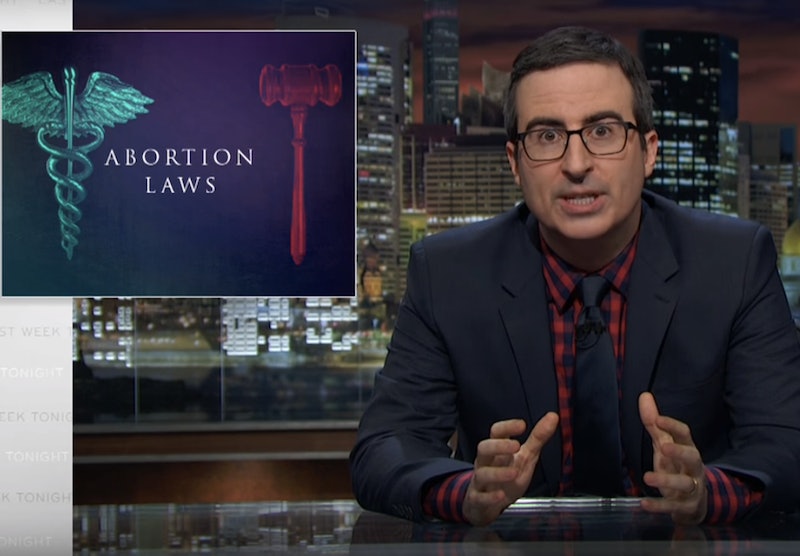 Last Week Tonight Season 3 has had quite the start. First came voter ID laws, then abortion laws, which John Oliver skillfully challenged during Sunday's new episode. Just how real does the real talk get? "Abortion cannot be theoretically legal, it has to be literally accessible," Oliver says. Bam.

The mass closing of abortion clinics shouldn't be news to people. State governments have aggressively passed or tried to pass abortion restriction laws that dramatically limit a woman's access to an abortion clinic. North Dakota, Mississippi, Missouri, and South Dakota are down to their very last. "Mississippi has four times as many S's as it now has abortion clinics," Oliver says. Bam.

The 1992 Supreme Court case of Planned Parenthood v. Casey said that state governments could pass restrictions so long as they didn't create an "undue burden" on women seeking abortions. Some states have used this ruling to require abortion clinics to meet egregiously demanding building, resources, or staff requirements in order to keep their doors open. Once these clinics can't meet those mandates, which aren't necessary to carry out safe abortions, they're forced to shut down.

Opponents claim these laws are designed to protect women's health, but how is restricting a woman's right to make the best medical decisions for herself and her body protecting her? Check out the full segment below.

More like this
24 History-Making Black Women You Probably Didn't Learn About In School
By Ayana Lage and JR Thorpe
'Brookside' Is Coming Back & Soap Opera Fans Are Going Wild
By Sam Ramsden
Here’s Where The NHS Nurses’ Strike Currently Stands
By Sophie McEvoy
6 Organizations Fighting Police Brutality That You Can Support Right Now
By Syeda Khaula Saad and JR Thorpe
Get Even More From Bustle — Sign Up For The Newsletter
From hair trends to relationship advice, our daily newsletter has everything you need to sound like a person who’s on TikTok, even if you aren’t.