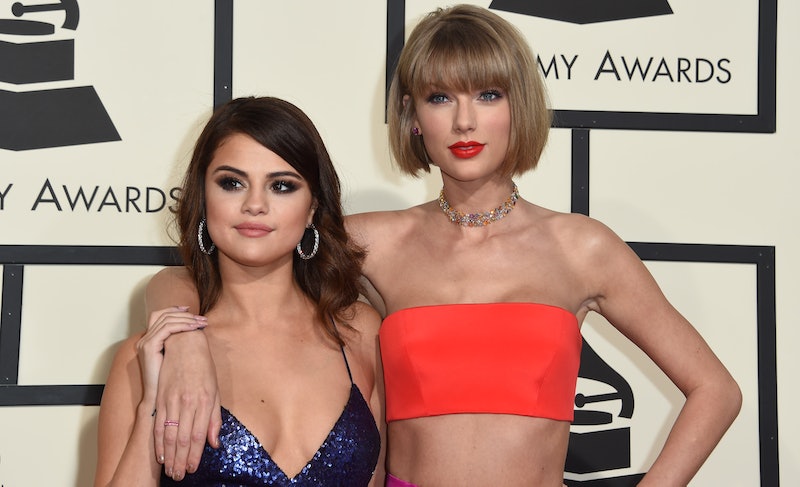 On Friday, February 19, the music world was rocked by the news that Kesha lost her lawsuit against Dr. Luke (real name, Lukasz Gottwald) after a judge ruled that the singer must remain in her contract with the Sony music producer despite her claims that she was sexually and verbally abused by the record producer. Dr. Luke has repeatedly denied these allegations and has countersued Kesha for defamation. In the aftermath, fans trended the hashtag #FreeKesha, and artists within the music community are speaking out in support of the pop star as well. The latest celebrity to jump in with support isTaylor Swift. In fact, instead of just speaking up on the topic, Swift donated $250,000 to Kesha, proving that she doesn't just talk about being a feminist; she takes the action to support her fellow women in any way that she can. And her actions speak louder than words.

The news of Swift's donation was confirmed through Swift's rep to JustJared, but the "Out of the Woods" singer has yet to speak directly about her donation. And by not speaking too loudly, Swift is effectively keeping the focus on the woman she is helping: Kesha. Swift's move appears to be a simple act of kindness and a move to support women in the music industry. That sentiment seems to be reflected in a tweet by Kesha's mother, Pebe Sebert, in which she expressed her gratefulness for the act:

Swift is not the only artist within the industry speaking up for Kesha. Some of them include Lady Gaga, Lorde, Demi Lovato, Ariana Grande, Iggy Azalea, Halsey, and so many more. Through all of the news of celebrity feuds and album drops, reading these tweets is proof that the sense of support among artists within the music industry is definitely still alive. That the shallowness of Hollywood might feel like a very real thing between all the award shows and the press tours and the celebrity baby pictures making headlines over real issues but that, when it matters, celebrities can, have, and will band together for causes that are close to their hearts.

Everything from money, to a simple act of kindness, can go a long way to support equality and fairness within the music industry. Kesha and Dr. Luke’s reps did not immediately respond to Bustle’s request for comment, but, in 2014 when the lawsuit was initially filed, Kesha's lawyer Mark Geragos told Billboard: