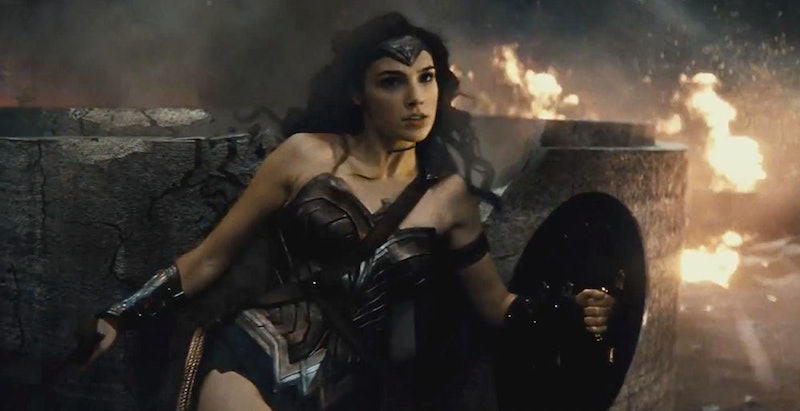 There's no time to rest when there's a world to save. Following the Batman V Superman: Dawn of Justice March 25th theatrical release, the DC Comics superheroes are coming together to start filming The Justice League Part One on April 11. For those who have chosen sides in the Batman V Superman warfare, it's already time to suit up, join together, and get to know the entire Justice League team. With April 11 on the calendar for filming, fans can imagine one epic DC Comics meet-up including Superman (Henry Cavill), Batman (Ben Affleck), a post-Batman V Superman debut Wonder Woman (played by Gal Gadot), and fellow newcomers The Flash (played by Ezra Miller), Aquaman (played by Jason Momoa), and Cyborg (played by Ray Fisher). In light of all that, it seems like the beginning of filming won't come soon enough. But, with the full team coming together just a couple of weeks after the official Wonder Woman-character introduction — I mean, the Batman V Superman premiere — I can't help but wonder what the rush is all about?

However, what may seem like a rush into production should instead be viewed through the lens of how long fans have already waited to see the full team together. "The idea that we could begin to boot up a Justice League concept was a cool thing,” Director Zack Snyder shared with Entertainment Weekly, “It was a little bit of an ‘about time’ moment, and I don’t blame [the studio] for feeling that way, because it’s a long time coming. But I do feel like it’s a little bit of a creative hurdle. It seems like an easy thing to do at first glance, the idea that, ‘Oh, we just get the rest of the superheroes in there.’ But you have to [establish] a world where they can exist.”

So, getting a move on the big picture seems to be the move Warner Brothers is looking to take in response, at least according to Snyder. And, no matter how scary that essential rush into filming might sound, if you know anything about filmmaking then you know that leaving plenty of time for post-production is always a good idea.

Right now, Director Zack Snyder is working on pre-production for The Justice League in the U.K. before he breaks for all of the press and red carpets expected of Batman V Superman face-off. Then production for the first part of the two-part group film will begin its filming in areas of southeast England, London, and even Iceland. Until then, Wonder Woman continues filming with Director Patty Jenkins until its release on June 23, 2017, and the pace is sped up so that they can get a head start for the November 17, 2017 release of The Justice League Part One.