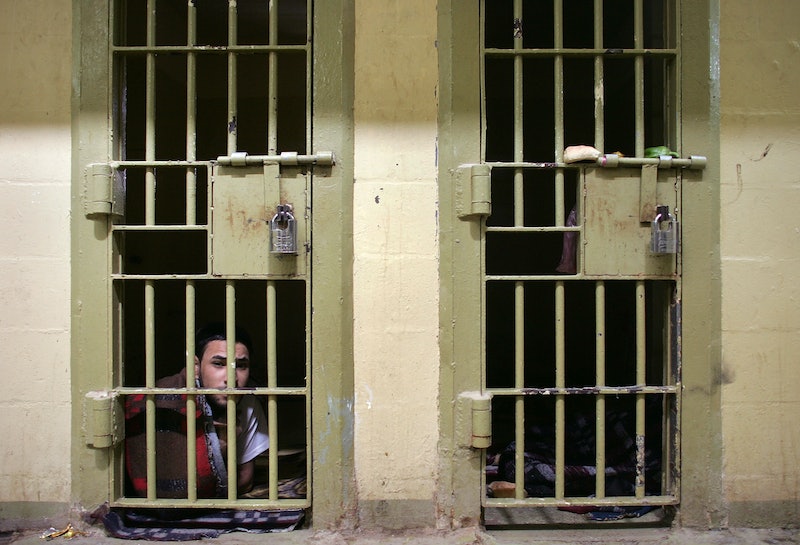 When inmates spend time in prison, they can be sentenced to solitary confinement for a myriad of reasons. Typically, inmates are doubled-up in a cell that can range in size from 6 feet by 9 feet to 7 feet by 12 feet. That's not a lot of space at all to live comfortably for 20 to 23 hours a day. Solitary confinement cells, however, are much smaller: they can be as small as the size of an elevator, according to the New York Civil Liberties Union. Because of the small dimensions of the cell and the amount of time spent inside the cell with limited human contact, the effects of solitary confinement can be detrimental on the human psyche, especially when you spend multiple years in isolation. These five U.S. prisoners have served some of the longest sentences in solitary confinement.

In New York State, as of December 2015, there were around 4,000 inmates currently in solitary confinement, where they spent 23 hours per day in isolated 6 feet by 10 feet cells. The cell sizes and conditions of solitary confinement vary state to state. However, there are some systemic policies that are maintained everywhere, according to the American Friends Service Committee. The AFSC reports that some things are standard, like spending 22 to 24 hours each day inside the cell, having limited contact with other people, and difficulty accessing medical and mental health treatments. Across the U.S., these five prisoners spent more than 130 collective years in solitary confinement.

Woodfox was awaiting a 50-year sentence for armed robbery when he arrived to the Louisiana State Penitentiary in 1971. On April 17, 1972, a corrections officer in the prison had been murdered, which Woodfox told The New York Times he learned of when he was picking up documents from an inmate paralegal. After Woodfox and a fellow inmate, Herman Wallace, spent a night in "the dungeon," a solitary cell, the two were immediately charged and sentenced to over four decades in solitary confinement.

Now, in 2016, after arranging a plea deal where Woodfox pleaded no contest to aggravated assault and murder of the corrections officer in 1972, he was released at 69 years old. Woodfox spent 45 years in the Louisiana State Penitentiary commonly known as Angola, which was the name of the cotton plantation that once occupied the same land as the prison. Although he was never proven guilty with scientific evidence, Woodfox spent 43 of those years locked in isolation.

Similar to Woodfox, Wallace was serving a sentence for armed robbery at the Angola prison in Louisiana. After he was convicted in the murder of the corrections officer in 1974, Wallace spent 41 years in solitary confinement. Wallace spent as much as 23 hours per day inside his cell — which measured 6 feet by 9 feet — alongside Woodfox and Robert King, another inmate convicted of a different crime. Because of the harsh conditions Wallace and his fellow inmates faced in solitary at Angola, a 2010 documentary In the Land of the Free made the three men the subject of their film.

Wallace was eventually released in October 2013, but he died of cancer just three days later.

When Manuel was just 13 years old he shot a woman in the face in Florida. He was tried and convicted as an adult, and he became one of the youngest inmates in the men's unit of a Tampa, FL state penitentiary. At 39 years old and after serving 15 years in isolation, Manuel is the longest-serving inmate in solitary confinement in Florida.

In 2014, an unlikely ally came to Manuel's side: the woman he shot in 1990 advocated for his release, telling the New York Times, "When you're 13, you do stupid stuff." Manuel was sentenced to 65 years in prison, but is working together with the victim to get a shorter sentence.

Martorano was "the longest-serving first-time non-violent offender in the Federal Bureau of Prisons," according to SalemNews.com. Martorano was charged with 19 counts of drug possession and distribution in 1982 for which he served nearly 32 years in prison. He was sentenced to four-and-a-half years in solitary confinement in one of America's most notorious underground prisons, Marion, located in Illinois. Although Martorano's time in solitary does not compare in years to the other offenders, this was one of the longest times a first-time, non-violent offender had been sentenced to solitary confinement.