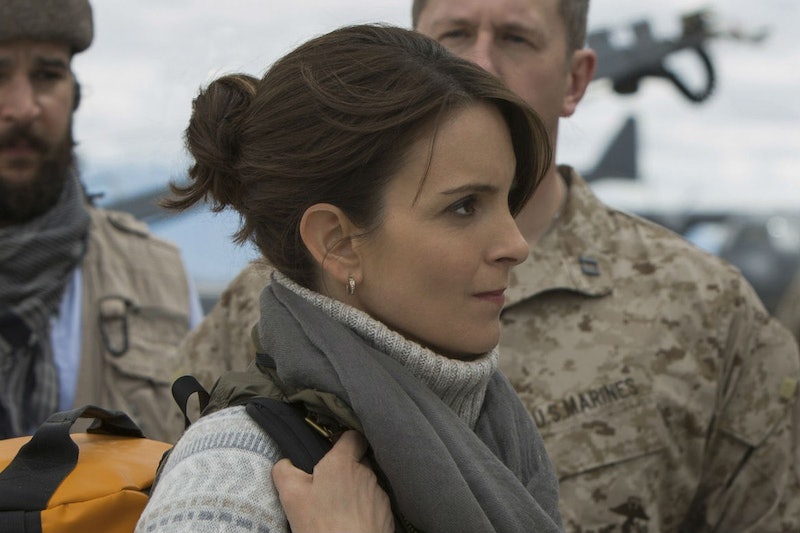 We all need a little more badass in our lives, but specifically, we need a little more badass women. And that doesn't mean they don't exist; what it means is we need more open celebration and tributes to the women of the world who showcase this quality. We need more badass women in our movies, our TV shows, our books, and more. Women who kick ass at work, at home, in war-torn countries, in African slums. Who use their power as badasses for good — to reveal social atrocities, to help other women, to make you see the world through a different lens. It’s these types of women who deserve our praise, and can give us a little inspiration on a dreary day.

So here are some of those women, whose stories are so badass they deserve not only a book but a movie too.

1. The Taliban Shuffle: Strange Days in Afghanistan and Pakistan by Kim Baker

Any book that begins with “I had always wanted to meet a warlord,” is a keeper, in my opinion.

In her memoir, The Taliban Shuffle , badass Kim Barker makes the elusive life of a foreign correspondent seem hilarious, absurd, and oddly similar to high school, complete with awkward sexual encounters, uncontrollable parties, and alcohol smuggling. Barker offers a unique look into not only what it means to be a war correspondent, but a female war correspondent. Being a woman gives her access to interviews with warlords, drug lords, and leaders that men would not be able to get, and it allows her an inside look at the life of women and children that men would not be able to see. But being a woman also gets her unwanted butt pinches whenever she stands in a crowd, unnecessarily aggressive security pat downs, and unwarranted professions of love from inappropriate people, like the former Prime Minister of Afghanistan. The Taliban Shuffle documents Barker’s hilarious and unrelenting journey to finding confidence as a journalist, and as a successful and independent woman.

2. It’s What I Do: A Photographer’s Life of Love and War by Lynsey Addario

Movie: The film adaptation, which is still in development, will be directed by Steven Spielberg and will star Jennifer Lawrence as Addario.

Lynsey Addario is a wife, mom, and award-winning war photographer who was kidnapped twice while documenting the life of women in war-torn countries around the world. Is there anything more badass than that?

She’s traveled to Afghanistan, Pakistan, Iraq, Sudan, Congo, and Libya, among others, bringing human context to conflicts and offering an intimate look at the unending strength of women living in war. Her autobiography, It’s What I Do , narrates the person behind the photos, and highlights the most badass part of her life: transitioning from world-traveling photographer, to world-traveling photographer mom, and living with the unfortunate judgements associated.

“I knew every single person would come out of the woods and feel they have a right to judge a pregnant woman, a mother,” she said in an interview with TIME . “But where are all the people screaming at all the men who leave their pregnant wives at home to go off to a war zone? Why is there no uproar about that?”

3. The Queen of Katwe: One Girl’s Triumphant Path to Becoming a Chess Champion by Tim Crothers

Movie: The film stars newcomer Madina Nalwanga as Mutsei, Lupita Nyong’o as her mother, Harriet, and David Oyelowo as Katende. It is set to open this fall.

Phiona Mutesi grew up in Katwe, one of the worst slums in all of Uganda. She was uneducated, barely literate, living in human waste, and working odd jobs to help her and brother get food. Then one day, in an effort to get food for her brother, she met Robert Katende, a refugee turned missionary who offered porridge to anyone willing to learn chess. This one day changed Mutesi’s life forever. She walked four miles a day to practice chess until she was beating everyone around her. She has since represented her country in international tournaments in Sudan, Siberia, and Istanbul. She overcame incredible adversity to become the first titled female chess player from Uganda.

OK, you caught me. This is one is becoming a TV show, not a movie. But it still counts! Heartbeat, the newest addition to NBC’s Wednesday night lineup beginning in March is based on the life of badass Dr. Kathy Magliato, one of only a handful of female heart transplant surgeons in the entire world. Originally encouraged to go into more “female friendly” specialties like OB-GYN or plastic surgery, Magliato fell in love with the human heart and broke through this male-dominated field with fervor. She is determined to use her status as a female cardiothoracic surgeon to help women identify and prevent heart disease (the No. 1 killer of women in the U.S.). And while her book serves as a moving testimony to the importance of early identification, it also documents the ever relatable struggle of women to balance work, family, and the idea of “having it all.”

5. The Zookeeper’s Wife by Diane Ackerman

Movie: The film, which is set to come out later this year, stars Jessica Chastain and Johan Heldenbergh as the Zabinskas. Other stars include Daniel Brul, Iddo Goldberg and Michael McElhatton.

Proving that badass women existed even before the word “badass” did, The Zookeeper’s Wife by Diane Ackerman is a story of survival, bravery, and two people’s incredibly significant attempt to save their part of the world. Set during World War II, the book follows the unpublished diary of Antonina Zabinska, and tells the true tale of how she and her husband, Jan, used their zoo to save the lives of over 300 Jews. After Poland was invaded by Germany, the Warsaw Zoo was closed and most of its animals destroyed or moved to Germany. Throughout the next five years of occupancy, Antonina and Jan secretly hosted Jews escaping from the Warsaw ghetto in the animal shelters, offering them refuge, food, and a sense of humanity in a place it was all but lost.