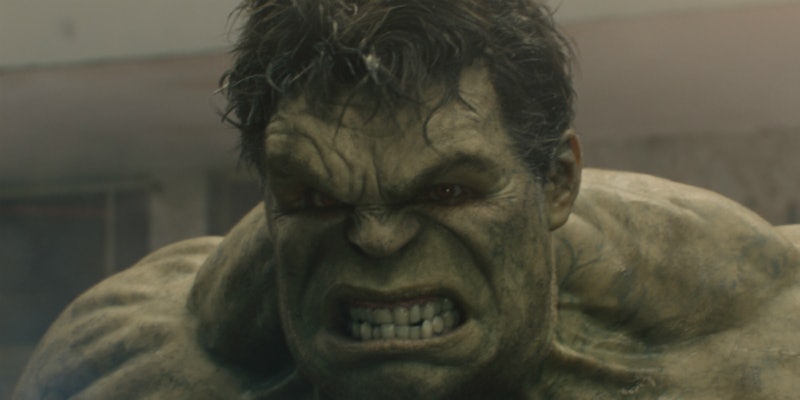 With the third Captain America film on its way, Captain America: Civil War fans are gearing up to see some of their favorite Avengers battle against each other. However, the long-awaited feud was expected to be missing a couple of familiar faces, since Mark Ruffalo revealed in an interview that The Hulk won't be in Captain America: Civil War. But now, in a recent interview with BBC Radio One, actor Anthony Mackie (who plays the Falcon) was talking about the cast, and he may have revealed that Mark Ruffalo was on the Civil War set. That's right. A big, green, angry Hulk could be smashing his way into battle.You know, if Anthony actually said what fans think he could have been alluding to in the interview. Just take a look at what he said for yourself.

"Having seen the movie, it’s Marvel’s best movie thus far. And I’m being honest — if a Marvel movie sucks, a movie in the Marvel universe, I’ll tell you it sucked... ‘Winter Soldier’ and ‘Iron Man 1' are probably Marvel’s two best movies. I feel like [’Civil War’] beats both of those movies. It’s really, really good. Because it’s more of an acting movie than an action movie, I feel like the story is very concise and interesting, and you get to see Robert Downey Jr and Chris Evans and Scarlett Johannson and Mark Ruffalo and everybody just do really, really good acting. And then there’s action in it. The great thing about being in a Marvel movie? They have really good actors. I mean, Don Cheadle is in the Marvel Universe! I think it might be the first superhero movie that might be up for Best Picture."

Now, obviously, everything about that statement is exciting. The possibility of Civil War being so good that it's Oscar-worthy? I mean, yes please. However, the one key phrase that sticks out to me is this one: "I feel like the story is very concise and interesting, and you get to see Robert Downey Jr and Chris Evans and Scarlett Johannson and Mark Ruffalo and everybody just do really, really good acting." Yep, he did just mention Mark Ruffalo — aka The Hulk — was there.

Unfortunately, considering that Mark is not listed on the film's IMDB page and has denied his presence himself, I'm thinking that Mackie could have just had an honest slip-up. I mean, Marvel is in the midst of filming a plethora of different superhero installments. I would assume that balancing who worked on which project with you when could be hard with such a large, ever-changing cast. However, I also don't want to deny the specificity of the actual statement that's being made. Considering that Mackie is directly talking about his movie-viewing experience, I wouldn't suspect that the actor would make up a phenomenal performance by Mark Ruffalo (even if he is an incredible actor in everything he does).

Meanwhile, what we do not know about Bruce Banner and his fate from the end of The Avengers: Age of Ultron could still be a mystery. "[Marvel] wants to keep the revelation of what happened a secret, because it is something truly significant," Ruffalo shared in an interview with Vulture following his cut from Civil War . Either it'll be one huge cliffhanger or one hugely epic reveal.

As for now, fans can definitely expect to see The Hulk return eventually. Deadline has confirmed that Ruffalo will be a part of the third Thor movie, Thor: Ragnarok , coming to theaters November 3, 2017. And, as for Captain American: Civil War, I would keep my Hulk t-shirt in the running for possible movie night attire. Because on May 6, 2016, anything is possible regarding the fate of The Avengers.