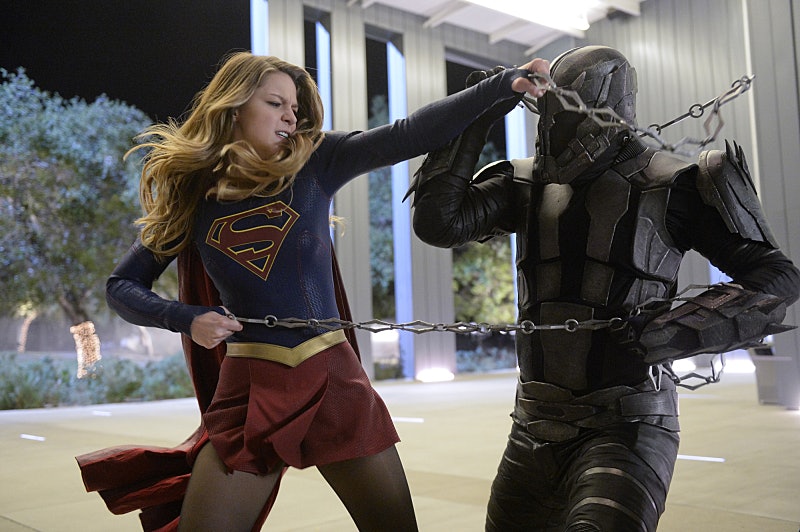 Remember Fort Rozz? Just to recap: It's the alien prison introduced earlier in Season 1 of Supergirl that crash-landed on Earth allowing many of its prisoners to wreck havoc — including Kara's Aunt Astra and her husband Non. Although the show hasn't addressed the alien escapees, aside from Astra and Non, in quite a few episodes, they'll return with a new foe for Supergirl that comes on the scene in National City. So, who is Master Jailer on Supergirl and what does he want with the former prisoners of Fort Rozz?

In the DC Comics, Master Jailer was originally introduced as an Earthen security expert who designed a prison that could hold super-villains, but Superman stole credit for its creation. So, to get revenge, Master Jailer kidnapped Lana Lang (Superman's girlfriend) and tried to kill the superhero with a series of traps — though he was unsuccessful and jailed in his own prison. In a newer version of Master Jailer, he was hired to create a super-villain containment cell, but soon turned his efforts toward a prison that could hold Superman. Later, he was recruited as the head of security for a government agency run by Maxwell Lord. So Master Jailer has a somewhat checkered past, sometimes acting as a villain and others as a relatively good samaritan.

But what does that mean for his character on Supergirl? Well, according to the episode synopsis, Master Jailer is searching for the former Fort Rozz inmates — but with deadly intentions:

It seems Kara will take issue with Master Jailer's methods of executing all the Fort Rozz escapees. But, according to Branson in an interview with ComicBook.com, Master Jailer sees Supergirl as an ally not an adversary. Additionally as a former guard on Fort Rozz, he had a close relationship with Kara's mother, Alura:

I would dare to say that he sees a partnership in the works. That he sees potential for people with like minded missions to come together and to conquer this, finish this. He's probably confused to why there cannot be a partnership. Especially with the closeness that he had with her mother.

So it seems Master Jailer on Supergirl will be a bit of a morally grey character, similar to certain iterations of the character in the comics. But, unlike the comic, his past has more ties to Supergirl and her family. His relationship with Alura makes me wonder if he ever dealt with Astra or Non while on Fort Rozz. Could he be an ally in Kara's mission to save Earth from Non's evil plan? I suppose we'll have to wait and see. Until then, the fight between Kara and Master Jailer could prove to be exciting — at least until these two (maybe) become allies.